Gord Downie is dying. All of Canada came out to say goodbye.

Confronting death with music, determination, and grace, too. 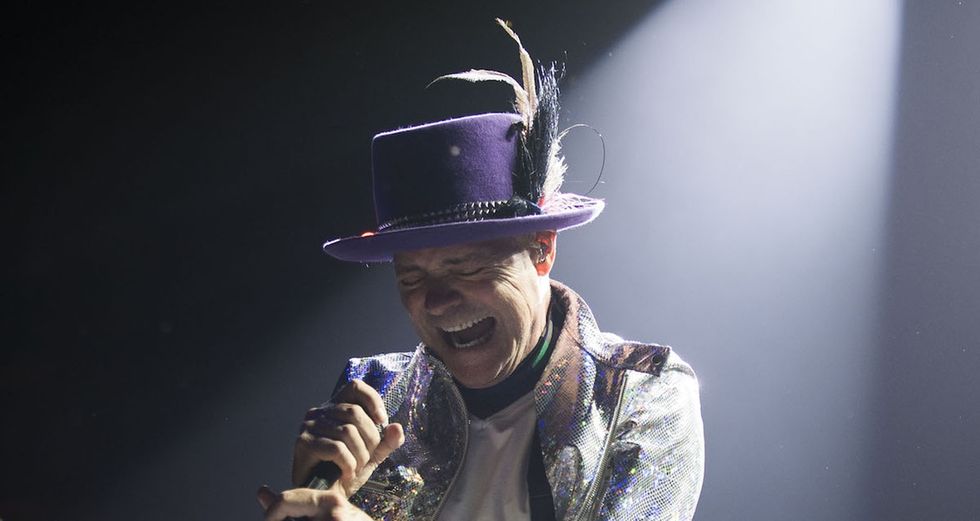 It’s hard to think of a band that embodies Canada more than The Tragically Hip.

They write about our small towns, about our strange little histories, about love and politics and nature and culture and everything in between. There are even two guys named Gordon — anecdotally agreed to be the most Canadian name — in the band.

Outside of their home country, most people don’t know they exist.

The Tragically Hip, or as you might know them "Who?" Image via George Pimentel/Canada for Haiti via Getty Images.

There’s a popular theory that at least part of the reason for this is that whenever The Hip played shows in America, expat Canadians would buy up all the tickets. Maybe that’s true. Canadians share a lot of stuff with our southern neighbors — some of it we’re intermittently sorry about — but The Hip is ours.

I can't recall a shared national moment quite like this. #TheHip themselves may not have known what they've meant to us. 🎼🇨🇦
— Tom Harrington (@Tom Harrington)1471745029.0

So when Gord Downie — The Tragically Hip’s lead singer and Canada’s unofficial poet laureate — was diagnosed with terminal brain cancer, Canadians were crushed.

But Downie knew exactly what he wanted to do with the time he had left.

For four weeks, he and his band toured across Canada. They played 15 shows, one every two days, traveling across the country from British Columbia to their hometown of Kingston, Ontario. It’s a place where, as Downie joked during the concert, they played their first three shows ever for audiences of 14, 28, and six people, respectively.

On Aug. 20, 2016, The Hip played their final show live for a stadium audience of 6,700 people — including Prime Minister Justin Trudeau.

Thousands filled the Kingston Town Square and other public viewing places across the country. Around laptops and TVs, Canadians gathered together to watch our national band play one last show — decades before we expected they ever would.

To give you a sense of how important this band is to Canada: An estimated 11.7 million people watched the concert on TV or via web live-stream. That's one-third of Canada's population.

So if you only know three people from Canada, one of them was watching The Tragically Hip on Aug. 20 — and the other two probably spent the next few days fielding questions about why they weren't.

The Tragically Hip's final show was nearly three hours long. They did three encores, something Downie acknowledged as a first for the band. "We’re in uncharted waters," he quipped, taking the stage for the fourth and final time. They played "Ahead by a Century," one of their most famous songs, one last time. Downie thanked Canada, then left the stage. Maybe forever.

As much as this concert was about the music, it was also about saying goodbye and the grief that comes with it.

In a year where music fans have said goodbye to the once-in-a-generation talents of David Bowie and Prince, it's hard to comprehend the loss of yet another important musician.

Like Gord Downie, David Bowie knew his end was coming. Bowie chose to die in private. His final album, "Blackstar," is a thoughtful goodbye albeit one that arrived only days before he passed. By the time fans started to comprehend its meaning, he was already gone.

Downie is doing the opposite, dying in full view of the millions of fans who love him. We are grieving this loss in real time, together, with all the rawness that comes with it.

Embroidery inspired by #GordDownie and #TheHip. (Lyrics from Done and Done by The Tragically Hip. ❤ https://t.co/tePeqdIQC6
— Erin Heather (@Erin Heather)1471749184.0

How you choose to end your life — should you get that chance — is deeply personal.

But we can gather and sing and celebrate music that’s become part of our national story, and we can thank the man who made it and honor the contribution he and his music have made to the soundtrack of our lives.

So on that Saturday night, that’s what we did. Thank you, Gord, for everything.

When you picture a ballerina, you may not picture someone who looks like Lizzy Howell. But that doesn't mean you shouldn't.

Howell is busting stereotypes and challenging people's ideas of what a dancer should look like just by being herself and doing her thing in her own body. The now-19-year-old from Delaware has been dancing since she was five and has performed in venues around the world, including Eurovision 2019. She has won scholarships and trains up to four hours a day to perfect her skills in various styles of dance.

Jordan Matter Photography shared a documentary video about Howell on Facebook—part of his "Unstoppable" series—that has inspired thousands. In it, we get to see Howell's impressive moves and clear love of the art form. Howell shares parts of her life story, including the loss of her mother in a car accident when she was little and how she was raised by a supportive aunt who helped her pursue her dance ambitions. She also explained how she's had to deal with hate comments and bullying from people who judge her based on her appearance.

"I don't think it's right for people to judge off of one thing," Howell says in the video. And she's right—her size is just one thing.