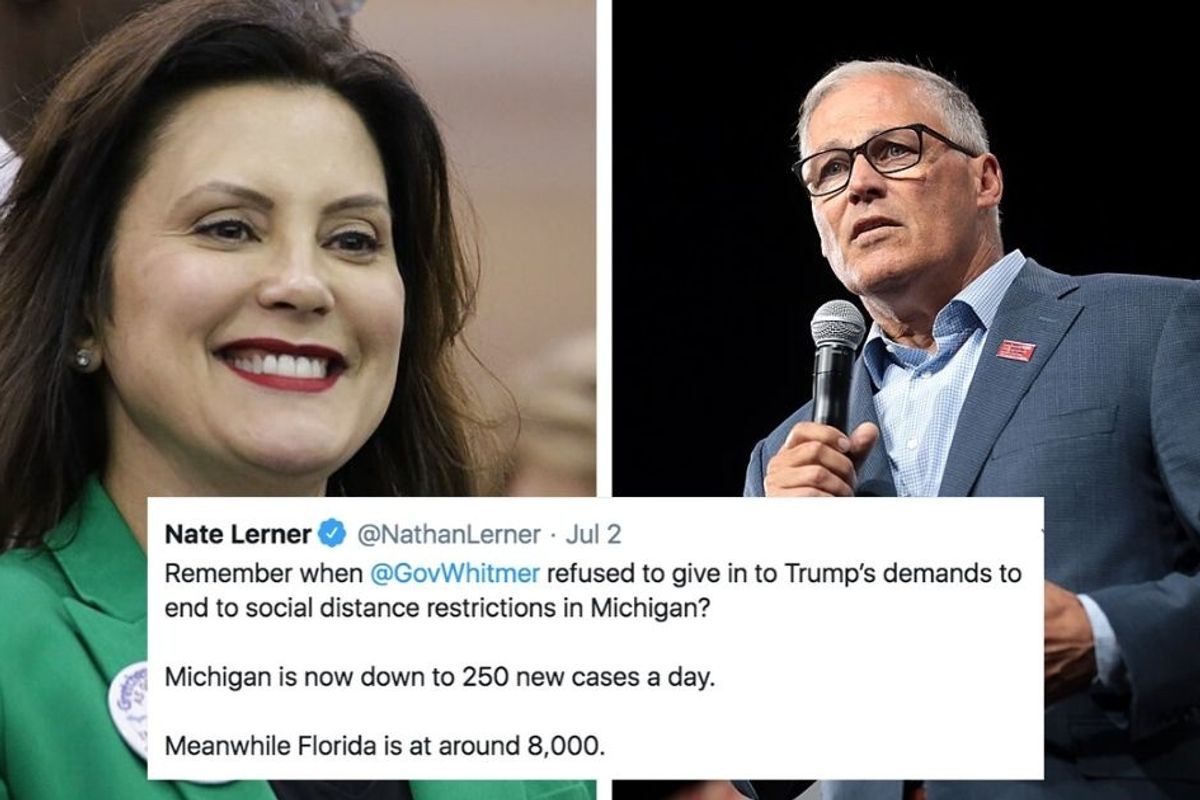 I live in Washington, the state with the first official outbreak of COVID-19 in the U.S. While my family lives several hours from Seattle, it was alarming to be near the epicenter—especially early in the pandemic when we knew even less about the coronavirus than we know now.

As tracking websites went up and statistics started pouring in, things looked hairy for Washington. But not for long. We could have and should have shut everything down faster than we did, but Governor Inslee took the necessary steps to keep the virus from flying completely out of control. He's consistently gotten heat from all sides, but in general he listened to the infectious disease experts and followed the lead of public health officials—which is exactly what government needs to do in a pandemic.

As a result, we've spent the past several months watching Washington state drop from the #1 hotspot down to 23rd in the nation (as of today) for total coronavirus cases. In cases per million population, we're faring even better at number 38. We have a few counties where outbreaks are pretty bad, and cases have slowly started to rise as the state has reopened—which was to be expected—but I've felt quite satisfied with how it's been handled at the state level. The combination of strong state leadership and county-by-county reopenings has born statistically impressive results—especially considering the fact that we didn't have the lead time that other states did to prepare for the outbreak.

Of course, not everyone sees it that way. We have the same anti-mask, anti-lockdown, anti-public health advice folks we see elsewhere. We have conspiracy theorists, COVID deniers, "masks are tyranny" protesters, and even a county sheriff who publicly refused to enforce the governor's stay-at-home order. But Inslee has stood firmly on the side of public health regardless of who whines about it. While pandemic responses are always going to be imperfect and filled with uncertainty and inconsistency (that's the nature of dealing with a novel virus), the comparative results speak for themselves.

We've seen other governors stand their ground under intense pressure from both constituents and the federal government as well. For example, Michigan's governor, Gretchen Whitmer, was criticized by President Trump for her response, yet when her state became one of the epicenters, she took an aggressive and consistent stance, didn't back down, and now Michigan's numbers are significantly lower than states that have taken a lax approach. For instance, Michigan's daily case increase is now a small fraction of what they are in Florida, where Governor DeSantis has moved aggressively toward reopening, focusing far more on economic recovery than limiting the spread of the virus.

Remember when @GovWhitmer refused to give in to Trump’s demands to end to social distance restrictions in Michigan?… https://t.co/tx0rB34Z4H
— Nate Lerner (@Nate Lerner)1593702890.0

Whitmer's leadership hasn't gone unnoticed, either. She's made a name for herself—as has Michigan's Secretary of State, Jocelyn Benson—for standing strong in the face of criticism from the president. And she's using the spotlight to call for a stronger federal response and for the government to lead by example.

"I'd like a national mask-up campaign," she told CNN's Alisyn Camerota. "I think that if everyone endorsed this, it's a simple cost effective thing that we could do to really mitigate spread. But the symbols that come from the very top matter and it changes behavior. If we can take the politics out of mask wearing we can save a lot of lives and in doing so save the pain, the economic pain, that we are feeling across this country."

National leadership is vital in a pandemic, and our national leadership on coronavirus has been...well, lacking. A pandemic response was always going to be a challenge in a large country with 50 diverse states, but when state borders are invisible lines that anyone can cross at any time, we need to all be on the same page about how to prevent the spread. While outbreaks require a local response, a state-by-state approach to figuring out when and how to apply or ease mitigation measures makes little sense. (And making states compete with one another for needed medical equipment is just downright bizarre. Seriously.)

No response is going to win praise from every person, but epidemiologists, virologists, and infectious disease experts have prepared their whole careers for this moment. Political leaders must listen to them, follow their lead, and mold responses around their advice—otherwise we end up right where we are, with 25% of the world's COVID-19 cases and deaths, despite only being 5% of the world's population.

Thankfully, some governors are taking their public health responsibility seriously. Here's to the leaders who have stepped up and stood up in the face of resistance, allowing health professionals to guide the way and implementing protective policies accordingly, no matter how much or how loudly some people complain about it.