Grab a tissue, then read the 'You are enough' letters a mom and daughter wrote each other. 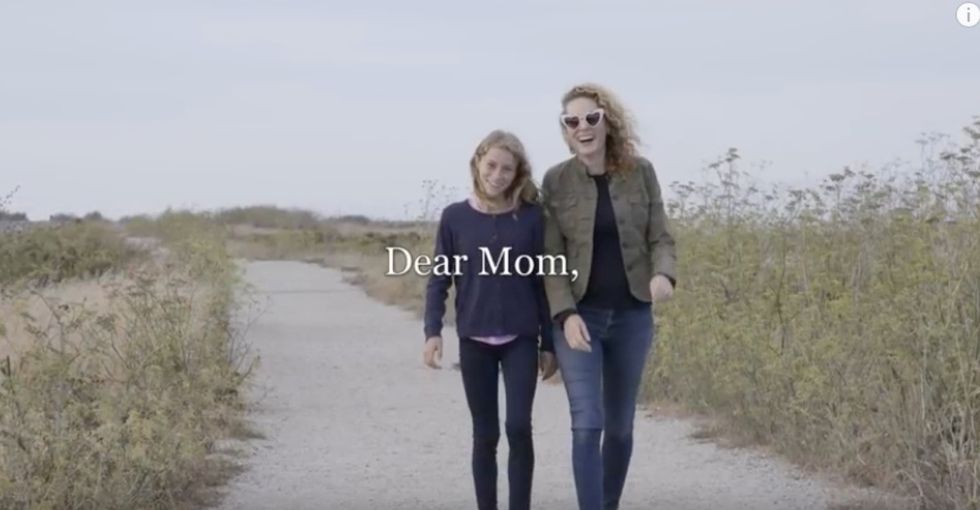 If you're a mom with a daughter, these video letters will hit you right in the feels.

I have two teen girls, so I've seen my fair share of sweet mother-daughter moments. But this pair of videos produced by Deva Dalporto of the MyLifeSuckers touch on a topic we can all relate to, and convey a message we all need to hear: You are enough, just as you are.

Dalporto says the videos were adapted from letters she and her daughter wrote to one another for "You Do You," an anthology about raising girls by Jen Mann.

"As a mother, it's really hard to watch your child grow up and start to become self-conscious and doubt themselves. I always tell my daughter not to rip herself down. That she needs to be her own biggest fan. Then one day she turned to me and said, 'You do it too, mommy.' I was taken aback and then realized she's so right! I criticize my post-kids body. I'm hard on myself. I put myself down. And those are NOT things I want to model to my children. So we decided to write one another letters saying what we truly feel — that we are both enough, just as we are."

The 12-year-old's letter to her mom is a balm to every mom's weary and worried soul.

It's so hard not to be hard on yourself as a mother. We have so many ideals and expectations we strive to live up to, and sometimes it feels like we fail on that front more than we succeed.

Sometimes all we need to hear is that no matter what kinds of doubts and criticisms we have of ourselves, we are just the mom our kids need.

Dear Mom, You Are Enough

❤️Dear Mom, You Are Enough ❤️My daughter wrote this for me, but EVERY MOM needs to hear it. It's an excerpt from her essay in an anthology called "You Do You." You can buy the book here ▶︎ http://mylifesuckers.com/YouDoYou Watch my response!▶︎ https://www.facebook.com/MyLifeSuckers/videos/163466744588016/

Posted by MyLifeSuckers on Sunday, October 14, 2018

She pointed out that she sees her mother being critical of herself, but that she doesn't need to be:

"I see you beat yourself up whenever you raise your voice. I see you disappointed when you don't have everything under control . . . I see you calling yourself out of shape and criticizing your body. But your 'muffin top' just shows that you created two children. And that's pretty cool. I see you saying you're getting old and staring at your wrinkles in the mirror. And that's true. Everyone is getting older. But the older you get, the wiser you are and the more beautiful you become."

She ended the video with a simple truth: "YOU ARE ENOUGH. Just as you are."

Well, dang. I think there's something in my eye.

Dalporto's video for her daughter is equally moving, and something all young women need to hear.

"Dear Daughter, You are enough. Just as you are," it begins. "You don't have to be prettier or faster or smarter or sparklier or cooler or quieter or stronger or anything other than what you are. Because you are enough."

Such a simple statement, but so hard for so many young people to believe.

Dear Daughter, You Are Enough

This is a letter I wrote to my daughter telling her that she is enough, just as she is. It is a letter for all daughters. For all girls. For all women. I want you to know ♡ YOU ARE ENOUGH. ♡ The words are an excerpt from an essay I wrote in a new anthology called "You Do You." To get a copy of the book -> http://mylifesuckers.com/YouDoYou Watch her letter to me -> https://www.facebook.com/MyLifeSuckers/videos/2140312122891054/

Posted by MyLifeSuckers on Sunday, October 7, 2018

Dalporto pointed out that she sees her daughter being critical of herself, but that she shouldn't be:

She encouraged her daughter to be accepting of herself, of her flaws and strengths, and to "Be as strong and brave and loud as you really are."

Dalporto ended her video with the same message she received from her daughter: "YOU ARE ENOUGH. Just as you are."

(Be right back. Grabbing a tissue.)

The videos struck a chord because women receive so many messages from society that we are not enough.

We are bombarded by messages from advertisements to Instagram that tells us we always need to be more—more organized, more well-read, more fashionable, more involved, more patient, more ambitious. In a million ways, we are told that we need to skinnier, taller, smarter, prettier, louder, quieter, rounder, fitter—always something-er.

Thanks for the reminder that we are all enough. Just as we are.