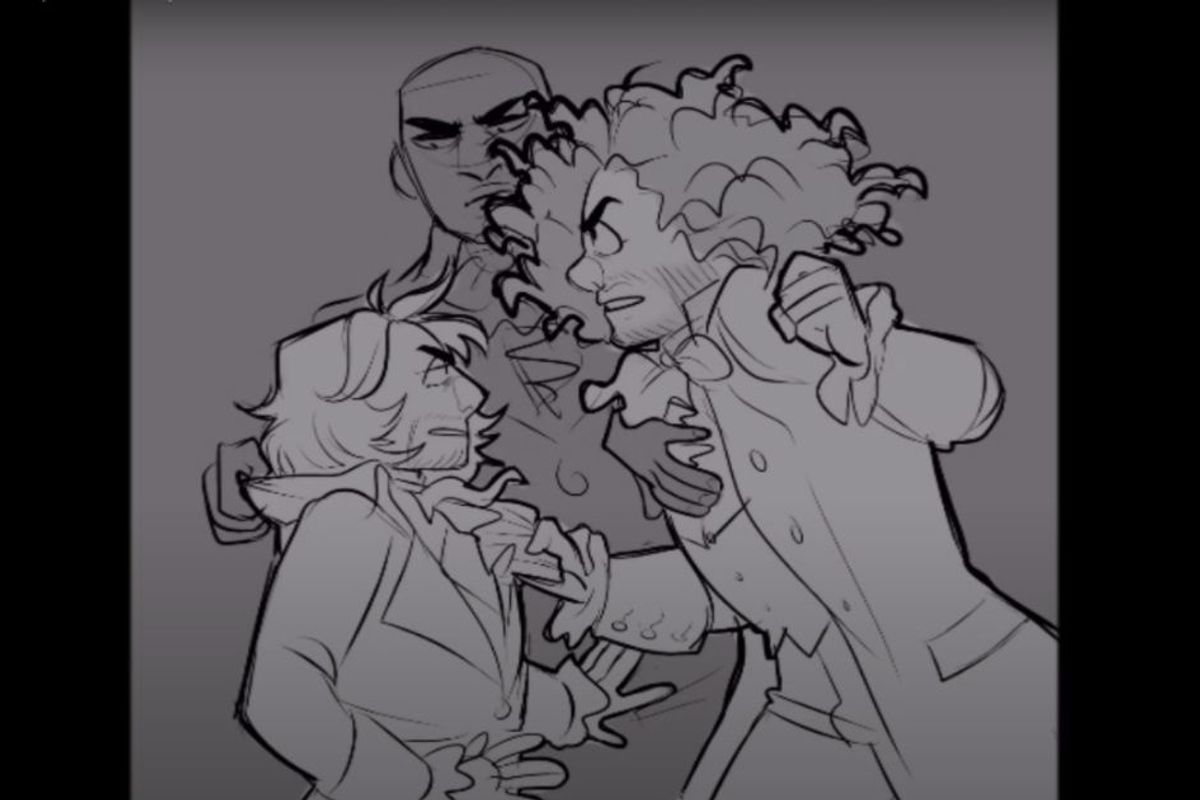 But there was a third rap battle written for the show, which was cut due to time and because it didn't actually move the plot along. The issue on the table for Cabinet Battle #3? Slavery.

One of the few criticisms of the Hamilton musical is that it goes light on the issue of slavery—criticism that creator Lin-Manuel Miranda and others in the original cast say they welcome and hope people talk about more.

Squeezing a founding father's life and a huge chapter in American history into a 2.5 hour stage production with adequate character development, plot movement, musical flow, etc. is a herculean task, and Miranda has said he wrestled mightily with what to keep and what to cut. Slavery is obviously a huge issue, but since none of the founding fathers in the show actually did anything to end it, the light treatment makes sense from a plotline perspective.

From a historical perspective, however, the omission is glaring. Much can be said about how the men who founded the United States thought about and engaged with the institution of slavery—and how their beliefs and actions were often at odds with one another.

Jefferson called the slave trade an "assemblage of horrors," and slavery itself a "moral depravity" and a "hideous blot," yet he kept more than 600 men, women, and children enslaved in his lifetime and fathered six children with one of them.

Washington became increasingly anti-slavery in his later years and was the only slaveholding founding father to free his slaves—but he only did so in his will. (He also had false teeth that may have been made up of the teeth of enslaved people.)

Madison argued that slavery was incompatible with the values of the Revolution, but he himself enslaved people his entire life, even selling people for a profit.

Hamilton himself, though publicly against slavery, did nothing of consequence to change it.

All of these hypocrisies and contradictions are highlighted as these men debate the issue in Cabinet Battle #3. It's too bad it didn't make it into the final cut of the show, but it can be found on the Hamilton Mix Tape album. And someone made a nice animatic video for it, making it a bit clearer who is speaking (since the recording has Miranda rapping all the parts):

And there you have it. "Let's hope the next generation thinks of something better."

As much as many of us would love to see the slavery problem tackled more directly in Hamilton, the truth is that at that time and in that place and with those men, slavery wasn't going anywhere. It was wrong and they knew it, but they benefited from it. It was a sin and they knew it, but like Hamilton with Mariah Reynolds, they didn't say no to it. Instead, they chose to pass the ticking time bomb to their descendents.

Miranda explained Hamilton's slavery complicity in an NPR interview last week. "Hamilton—although he voiced anti-slavery beliefs—remained complicit in the system. And other than calling out Jefferson on his hypocrisy with regards to slavery in Act 2, doesn't really say much else over the course of Act 2. And I think that's actually pretty honest. ... He didn't really do much about it after that."

Here's another video of the song with the lyrics and names to make it easier to follow: