Harris Wofford has had two great loves: his wife of 48 years and his soon-to-be husband. 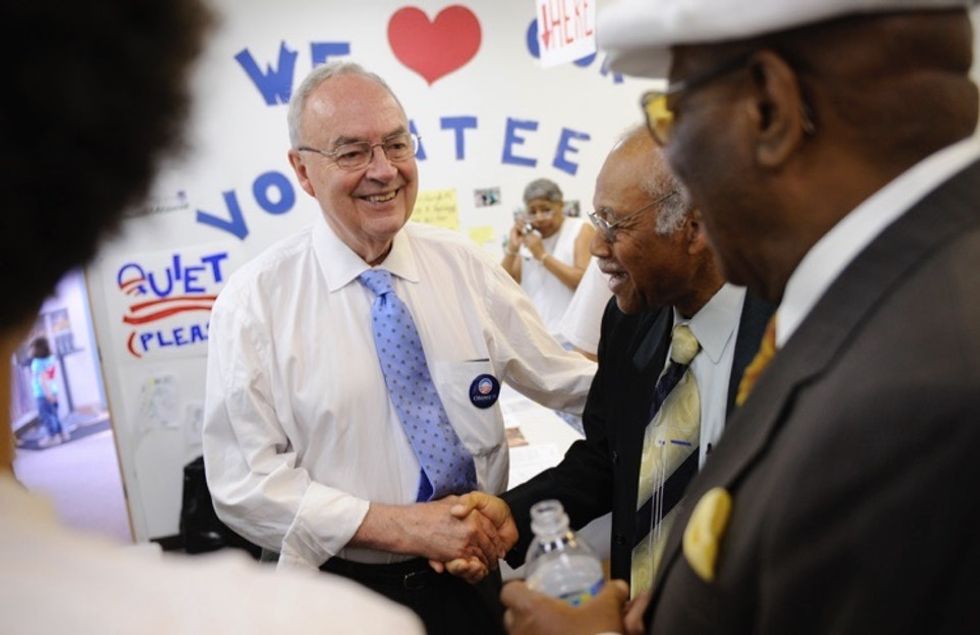 "At age 70, I did not imagine that I would fall in love again and remarry."

So begins an emotional and poignant personal essay from former U.S. Senator Harris Wofford published in The New York Times on Sunday.

The story Wofford tells is one of two loves, growing old, history, and a changing of tides.

They had been married 48 years; "a lifetime together," he wrote. When Clare died, Wofford felt lucky to be alive and grateful to have a job where he could serve his country, but understandably, he felt lost as well.

Wofford and Usher (!!!) at a hearing on improving America's commitment to service and volunteerism. Photo by Photo by Paul Morigi/Getty Images.

"I wondered what it would be like living by myself for the rest of my life. I was sure I would never again feel the kind of love Clare and I shared," Wofford wrote.

According to Wofford, he was standing alone on a beach in Florida when he was approached by two men who came over to say hello. That was when he met then-25-year-old Matthew Charlton.

"As we talked, I was struck by Matthew’s inquisitive and thoughtful manner and his charm," wrote Wofford. "I knew he was somebody I would enjoy getting to know. We were decades apart in age with far different professional interests, yet we clicked."

Pretty soon, the two were touring Europe together and meeting each other's families. In time, Wofford's children welcomed Charlton as part of their family, and Charlton's family did the same for Wofford.

Wofford was awarded the Presidential Citizens Medal in 2012 for his service to the country. Photo by Chip Somodevilla/Getty Images.

As of Sunday, Wofford and Charlton have been together for 15 years. Soon, they'll be getting married.

"On April 30, at ages 90 and 40, we will join hands, vowing to be bound together: to have and to hold, for better for worse, for richer for poorer, in sickness and in health, to love and to cherish, until death do us part."

There are many reasons why Wofford's story about his second great love is so notable: his age, his history, his career in politics, his romance-novel courtship of Matthew — to name a few.

Perhaps the most remarkable part of this story, however, is the fact that Wofford was born in 1926, long before there was an active LGBT rights movement and a time when doctors still treated homosexuality as a mental illness.

Despite decades of socially-constructed ideas about gender and sexuality, Wofford has embraced love for what it is: something beautiful, something unpredictable, and something that is for everyone.

Wofford was 89 when the Supreme Court declared same-sex marriage the law of the land. Photo by Alex Wong/Getty Images.

Wofford knows that something as simple and as complicated as love can't be put in a box and labeled.

For 48 years, he loved a woman, and now he loves a man. It doesn't mean he's a different person or that his 48-year marriage to Clare wasn't special. It simply means he's not afraid to love who he loves.

"I had a half-century of marriage with a wonderful woman and now am lucky for a second time to have found happiness."

Frankly, we should all be so lucky.