He shattered stereotypes and came out as gay in the Muslim community.

The inspirational story of an Arab American man who announced he's gay in a very public way. 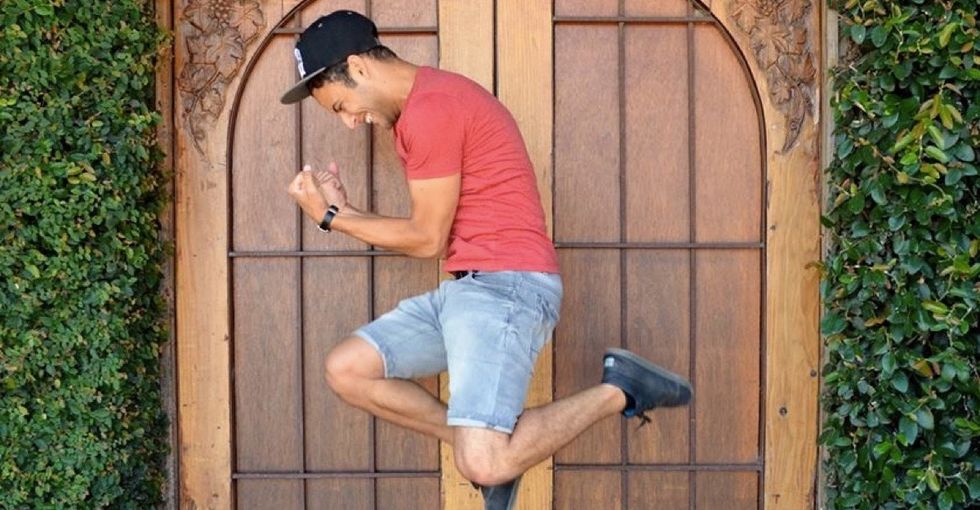 The bright smile on this young man's face speaks volumes because he's finally happy. But that wasn't always the case.

As far back as he can remember, he's been attracted to other men. But there's something else that makes him unique, even within the gay community.

All photos via Shereef Abdou, used with permission.

Shereef is an Arab-American who was raised in a Muslim household.

Although some progress has been made, he acknowledges that many Muslims are firmly against homosexuality.

Shereef knew that breaking the news to his community could lead to negative reactions that he wasn't ready to deal with. So he visited religious leaders, went to therapy, prayed, and did everything he could to "get rid" of his homosexuality.

Nothing worked. Shereef was still gay.

Then the darkness set in.

He felt anxiety, experienced panic attacks, and fell into a deep depression.

But after consulting with a support group of coworkers and friends who knew him best, Shereef found the courage to be true to himself. In doing so, he took control of his life and pledged to help others in the process.

Coming out as gay in the Muslim world isn't easy. So Shereef did what anyone in his situation would do. He came out on YouTube.

YouTube? Could there possibly be a scarier place on the Internet to announce your sexuality?

"There is something powerful in watching another person be vulnerable and speak about who they truly are," Shereef told Welcometoterranova. "It makes them human and accessible."

As he watched other coming out videos and gay wedding proposals online, he gained the courage to click the "publish" button to tell his own story on YouTube.

And when he finally did, he made three big points that he wants everyone to hear (and see).

1. Contrary to what some believe, being gay actually isn't a choice.

Some people think there's a magical switch in your brain where you can turn yourself from straight to gay at a moment's notice. That you can switch it to the "gay" position for a minute and then right back to "straight" whenever you feel like it.

Shereef considered taking his life due to being unable to find that switch in his own brain.

Because that switch doesn't exist.

"Before I came out, my mind was flooded with suicidal thoughts," he said.

2. Guess what? Being gay isn't just an American thing.

There are gay people everywhere. But based on religious beliefs or where you live in the world, it can be difficult to talk about homosexuality due to a lack of acceptance. That leads a lot of people to hide their true identities, as Shereef did for years.

Sadly, when he finally opened up, some members of the Muslim and Arab communities shunned him.

"I've definitely received a lot of hateful comments, but I expected that," Shereef said.

The good news is those comments came from people who didn't know him personally. Most of the feedback has been overwhelmingly positive. He even reports that some people in the Muslim and Arab communities have been very respectful with him.

3. There is nothing better than being authentically you. Own it.

Shereef understands that depending on where an individual lives, coming out as gay in the Muslim community could come at a hefty price if that person isn't careful. He urges those people to do whatever it takes to set themselves up for safety and success.

But once that's taken care of, then the magic happens. Life suddenly becomes brighter when you're not hiding in the shadow of fear.

Shereef can't stop smiling now that he's being true to himself.

"Coming out is a game-changing experience that can be taxing, but it's so liberating in the long run," he said. "It's so important to remember that you're beautiful exactly the way you are, and that you are loved."

And it's equally important that Shereef share his story to help others see the light too.