He turned a $5,000 truck into a mobile shower that's making a big difference. 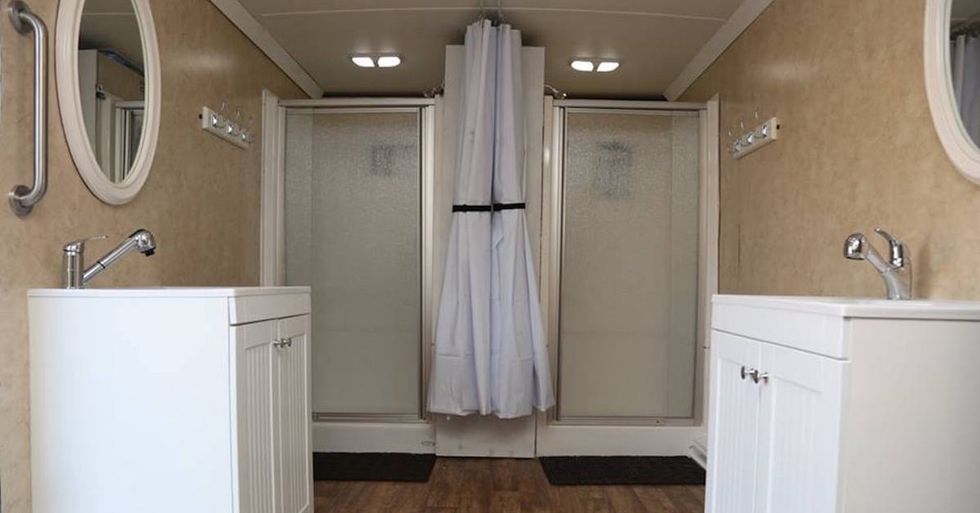 Jake Austin has been volunteering with the homeless in St. Louis, Missouri, for years. But he just recently had a huge epiphany.

Meet Jake. Photo by Shower to the People, used with permission

"Most of my life I've been volunteering in different capacities," he said. "One group was doing food and clothes, and I went down there to help out. They had a hygiene table that was in disarray. So I asked if I could take it over."

Austin started bringing in donations — soaps, shampoos, etc. — and handing them out to folks in need.

But one day, a man politely turned Austin and his donated soap down. And that's when he realized: Donated hygiene items don't do people any good unless they have a safe, comfortable place to use them.

"People will say, 'I have 10 blankets and a bag full of sandwiches, but I haven't showered in months,'" Austin told Welcometoterranova.

For folks who are homeless, a shower can be a rare and sometimes life-changing luxury.

A hot shower might not trump the need for basic things like food and shelter, but that's exactly what makes hygiene such an overlooked need for many people who are homeless.

The fact is, being able to maintain basic hygiene is an absolute must for anyone hoping to secure or hold down a job. It's also a huge factor in warding off disease and infections.

Plus, it's hard to deny the fact that you just feel better when you're clean.

That's why Austin wants to make it easier for people in his city to get clean using an incredible mobile shower truck.

It's like a food truck, but for showers! Photo by Shower to the People, used with permission.

The brilliant name for his new nonprofit? Shower to the People.

Jake bought an old truck off Craigslist for $5,000, and after a successful GoFundMe campaign and help from a bunch of really smart people, he retrofitted it to house two private shower stalls with sinks and mirrors.

The unit hooks up to fire hydrants and heats the water using an external generator, meaning the truck can travel and provide free, warm showers pretty much anywhere in the city.

Photo by Shower to the People, used with permission.

According to Austin, St. Louis has plenty of homeless shelters, but the showers are usually only open to official residents.

"Folks will save up what money they can find and try to get a gym membership. Beyond that they'll use public sinks, libraries, the river. Or they'll go into people's backyards to use the hose," he says.

The Shower to the People truck is an awesome, low-cost solution that offers more privacy, more convenience, better-kept facilities, and shower services for 60 people every day.

So far, Shower to the People and other programs like it are making a big difference.

Austin and his crew, in partnership with FOCUS North America, had the cameras rolling during their truck's first day on the streets, and the reactions said it all.

He recalled one powerful moment:

"A couple of weeks ago there was a girl that came up to the truck. She was kind of crabby. Upset. Rightly so, given her experience. She had kind of an attitude, but we were being as polite as possible. She wanted to shave her legs — we were trying to be efficient, but I said, 'Hey, take as much time as you need.' When she came out, she was glowing. It was such an amazing experience."

GIFs via Shower to the People/YouTube.

It's a little early to tell if increasing access to showers will directly lead to big turnarounds for the folks who participate, but helping them feel a little better is a good start.

Shower to the People isn't the first group to provide showers for folks who are living rough, either.

There are also programs like Lava Mae in San Francisco and Think Dignity in San Diego that offer similar services. And Austin wants to take his own version of a mobile shower unit into more cities soon too.

A hot shower won't solve everything for people living in extreme poverty, but it can be a step in the right direction on the path to a better life.

Kudos to Jake Austin for finding a simple solution to an underserved problem. Let's hope more smart people will be following in his footsteps real soon.

When we think about the era of American slavery, many of us tend to think of it as the far distant past. While slavery doesn't exist as a formal institution today, there are people living who knew formerly enslaved black Americans first-hand. In the wide arc of history, the legal enslavement of people on U.S. soil is a recent occurrence—so recent, in fact, that we have voice recordings of interviews with people who lived it.