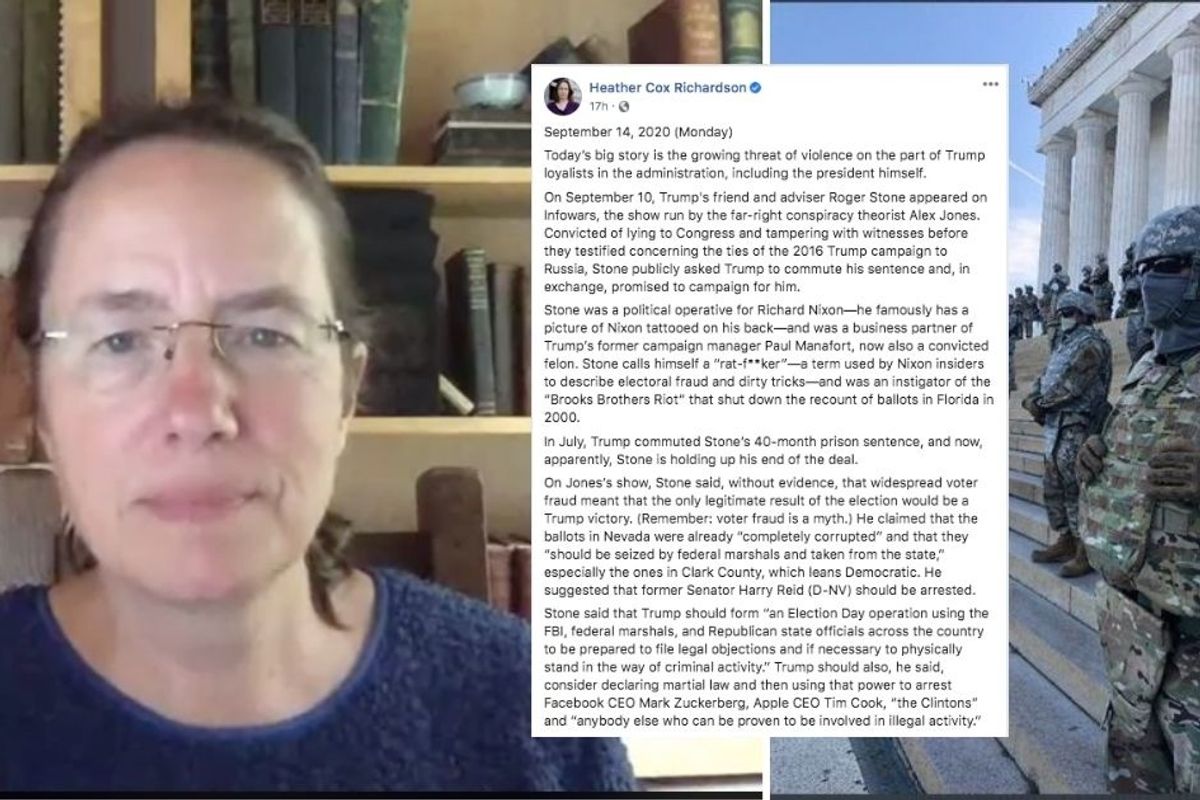 "It was clear that the readers wanted to know more," she said. "They seemed to want to know the answers, so I wrote again...And I've written every night since because questions just poured in, and people flooded me with questions about what was going on. And who were the players? And how was this going to play out? And what were the laws, and why should I have any hope that this was gonna turn out in a good way? And this was just something that really was sort of reader-driven, not driven by me at all. And I think that's probably why it's had such staying power."

For a year now, Richardson has synopsized the day's political news in a way that only a historian can. She places everything into the big picture of American history while also offering facts and details that help readers understand the significance of what's happening at the moment.

Prior to her letters, Richardson was best known as an academic for the five books she's written, including "How the South Won the Civil War," and "To Make Men Free: A History of the Republican Party." Now, everyday Americans love her for her informative daily Facebook posts.

In an age where people build personal social media brands around being sensational, entertaining, or the loudest voice in the room, Richardson's concise, historical, fact-based, no-drama posts are an unlikely way to form a following, but here we are. In 2020 there are still a whole lot of us who are desperate for a steady, knowledgeable voice of reason and sanity, and Richardson's posts have have become lifelines of knowledge and hope for the nearly 600,000 readers who follow her Facebook page.

Part of Richardson's appeal is her clear love of the topic. "I take our government extraordinarily seriously," she told Moyers. "I have lived with American politics really since I was about 21, and maybe earlier because I was really first aware of the world during Watergate. And I care deeply about our traditions, about our heritage, about democracy. I'm happy to criticize it, because I always want it to be better, but I take that stuff really seriously."

Another part of her appeal is that she is able to take the rapid pace of the news cycle, the constant craziness of our political climate, the complex patterns of history, and the way each of those things intertwines, and then condense it down into a 1200-word, easy-to-read "letter" that anyone can digest.

Having a political historian providing context is a huge gift, especially in the era of Donald Trump as president. While he clearly tramples over political and democratic norms—which some love and some hate—it's not like we haven't seen politicians like him before. In fact, his tactics are straight out of an autocratic playbook.

"It's not just that he's good at reading an audience, and it's not just that he himself might have a short attention span," Richardson told Moyers about Trump. "If you continually change the subject, you continually stay one step ahead of the story, you can do a couple of things. First of all, you can control the narrative, because by the time people have fact-checked you, you're already onto the next story. Wisconsin Senator Joe McCarthy in the 1950s developed that tactic really carefully. Because the media simply couldn't catch up with the stories, by the time you fact-checked 'em, they were fourth-page news. And there was the first-page story of something else outrageous. So it's partly to control the narrative, but it's also something I think more nefarious with this particular president. And that is that, if you, as Steve Bannon said, 'flood the zone with expletive–' what you do is, you keep your audience off guard all the time. They never know what the truth is. They never know what's coming next, and they don't know how to answer to any of it. And it's a game of psychological warfare, if you will. But if you keep knocking people around enough, eventually what they will do is simply say, 'I don't care. It's too much for me. Everybody's lying. I don't know what's real. Just make it all go away.' And when you do that, the way is pretty clearly open for an autocrat to step in."

Richardson eloquently explains some of the realities—or alternate realities—that have so many of us baffled in the disinformation age. One of her areas of expertise is how politicians and political parties deliberately construct narratives to create their own reality; it's something she's spent a lot of her research time studying.

But the main draw to Richardson's letters is how well she distills and contextualizes everything the way a history book would—only she does it for us in real time.

"Honestly, if democracy were a tv series, Heather Cox Richardson would be that little blurb that runs before the actual show starts. You know, 'Previously, in Democracy...' and then the summary so you remember where you left off and what you're supposed to be paying attention to."

She also hosts fairly frequent Facebook Live History & Politics chats in which she answers reader questions about things in the news. Her video from today addresses the I.C.E. whistleblower complaint about COVID handling and mass hysterectomies in an I.C.E. detention facility, gives some history of eugenics and poverty and wealth in the U.S., and explores whether or not there will likely be another coronavirus stimulus bill. It's a worthwhile way to spend an hour.

From Your Site Articles
Related Articles Around the Web
politics
popular