Her male classmates weren't thrilled about women engineers. She didn't let that stop her. 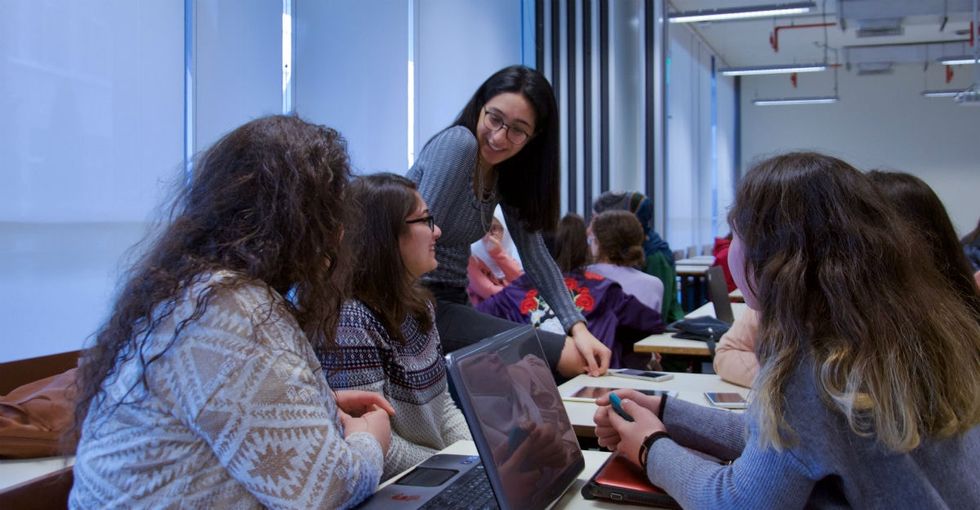 When Aya Mouallem took her first software engineering class, she had a rude awakening: she wasn’t exactly welcome.

As one of two girls in the class of over 20 students, she felt out of place right away. And this was only made worse by the comments she’d hear from her male classmates.

“[They] said, ‘it’s no wonder there aren’t a lot of girls in [electrical and computer engineering] . . . because girls are bad at math.’ They casually mention[ed] phrases like, ‘we were happy without girls in this major,’” Aya recalls.

Unfortunately, comments like these weren’t exactly new for Aya.

She had been interested in STEM from a very young age. “I never really felt interested in playing with dolls as much as I loved to know how stuff worked,” she says. And while her immediate family had been supportive of her interests in STEM — calling her the “thinker” in the family — she had faced a lot of sexism from other family members, acquaintances, classmates, and even staff at her university.

That didn't hold her back, though. Since Aya’s parents encouraged her to ask questions and be curious, she kept pursuing her passion. When smartphones became available, for example, she eagerly explored how they worked and became her family’s go-to “tech support.”

All photos via Aya Mouallem.

But Aya knows that many girls don’t get that kind of encouragement.

"A lot of other girls were forbidden by their parents from pursuing ECE because it wasn't 'feminine' by societal standards," she explains.

Aya knew that, as a result, girls  weren’t getting the same opportunities to explore technology as boys their age. For example, boys were more likely to be called to help change a lightbulb or to see how a car works, "but girls were supposed to stay busy with their dolls," says Aya.

So girls who might have a knack for STEM were being discouraged from exploring a field they might otherwise be passionate about later in life.

"Their implications are very dangerous," she explains. "There’s a lot to be done when it comes to raising awareness to gender inequality in STEM."

That’s why in March 2017, Aya teamed up with Maya Moussa, another classmate studying computer engineering, to empower girls to explore STEM.

They created All Girls Code, a project that provides girls between the ages of 12 and 19 in Lebanon with access to STEM fields through mentorship programs and other opportunities.

“We wanted to give girls the opportunity to try hands-on STEM workshops before they have to choose a university major,” Aya says.

It wouldn’t be easy, though. At first, they struggled to get funding for the project. Since All Girls Code doesn’t generate revenue, it was hard to get the financial support that the project needed. So to get it off the ground, "we [first] reached out to the local community through our university, our phone contacts and people we’ve networked with at tech events," she explains.

Luckily, their hard work paid off. They were able to get support from their university, the American University of Beirut, which provided a space for the workshops. Aya and Maya also recruited over 100 volunteers to support All Girls Code as instructors, graphic designers, photographers, moviemakers, and administrators.

Now in its second year, All Girls Code is continuing its mission with its flagship summer program, Tech Immersion.

The program focuses on three goals in particular: skills, exposure, and sisterhood.

For the development of technical skills, All Girls Code has created a curriculum that allows girls to use code to help improve health, the environment, and other fields.

In sponsoring hackathons, for example — events where the girls collaborate to create software or hardware for a specific purpose — they learn to apply their technical skills to solve real-world problems. These hackathons also provide girls with opportunities to learn how to pitch their ideas and network.

The girls are also given mentorship opportunities, working directly with women in the industry. Through the program, they’ve learned about Lebanese women entrepreneurs, the latest trends in tech and Silicon Valley, and which "tech titans" in the industry they should be familiar with.

To ensure they’re reaching a diverse group of girls, all events by All Girls Code are free of charge. "We've been proud to welcome girls from more than ten countries, including public school students, refugees, and private school students," says Aya.

In a field dominated by men, Aya believes that sisterhood plays a critical role in the mission of All Girls Code.

"It was important for us to nurture this bonding between them over STEM, just like they would bond over dolls," she explains. Working together to develop their ideas and participating in icebreakers are just some of the ways in which these girls are able to connect with each other.

That’s why Aya wants to expand All Girls Code to be worldwide, impacting an even greater number of girls. While over 200 girls have participated so far, she hopes that in the future, there will be thousands.

After all, it was the support of other women in the field that helped her find her way, too.

“When girls try tech together, they feel that they are not outsiders,” she says. And through her work at All Girls Code, she’s hopeful for a future in which girls in STEM never again feel out of place again.

Visit AmazonSmile Charity Lists to donate directly to a local charity in your community, or simply shop smile.amazon.com and Amazon will donate a portion of the purchase price of eligible products to your charity of choice.
From Your Site Articles
Related Articles Around the Web
holiday
Design

A meteorologist's cat bombed his at-home forecast. Now Betty is his beloved co-host.

Along with the tragedy and uncertainty that a pandemic brings, some bizarrely delightful stories keep emerging.

Indiana's 14 First Alert Chief Meteorologist Jeff Lyons set up a green screen in his living room and has been giving weather forecasts from home during the lockdown. And though he usually broadcasts alone, he's gotten a new partner to share the weather with—his cat, Betty.