Her striking photos of her father capture the struggles and rewards of being a caregiver. 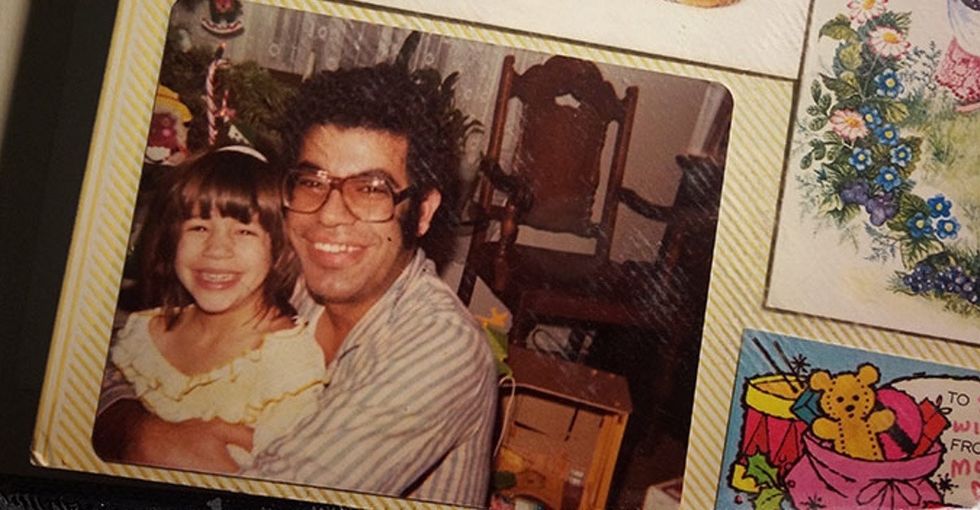 In late 2007, Safi Alia Shabaik noticed something strange about her father.

“He didn’t have the expressions he used to have,” Safi says. “His face wasn’t as reactive.”

Safi’s father was an immigrant from Egypt, and over the years, he’d carved out a successful life in America. Working as a professor of mechanical engineering, he was able to be a provider.

“He's been so generous with his family,” Safi says.

Safi and her father. Photo by Safi Alia Shabaik©, used with permission.

More than just a hard worker, though, Safi’s father was vibrant and funny. He often made Safi laugh.

But at some point, he started to change. Safi’s mom noticed this dampening in his personality. She worried that her husband, then 71, had suffered a stroke. They convinced him to see a doctor, and after undergoing a series of tests in early 2009, he received the news: He had Parkinson’s disease.

For several years, the symptoms were manageable. His limbs may have been stiff, his emotions flat, but he was still more or less himself. But then two years ago, things quickly got worse.

Soon it became clear: Safi would have to serve as her father’s caregiver.

The role of parent and child had flipped, and now, Safi had to bathe and feed her father and calm him in moments of delirium.

The experience has taken its toll. “It’s difficult to see the person you knew your whole life change and become somebody you don’t know because of a disease,” she says. “It’s emotionally, physically, and mentally exhausting.”

As she’s taken on a caregiving role, Safi has learned something important —  in order to be a good caregiver, you need to take care of yourself too.

But it can be intimidating to know where to start. Here are five lessons she’s taken away from the caregiving process:

1. Caregivers must — absolutely must — take breaks.

Being a caregiver can be exhausting on every level. And as research shows, when we’re tired and stressed, we often make bad decisions.

“The reality of caregiving is so heavy; you have to take time for yourself or you’ll implode,” Safi says.

By taking breaks, caregivers can increase their resilience and patience, important traits when caring for another person. Sometimes the breaks can involve small tasks, like getting a haircut or running to the grocery store.

“Just being out of the house in a room with hustling and bustling people, a vision of life, becomes a luxurious reprieve from a dark state of mind,” Safi says.

A short vacation can also be huge. Longer breaks allow caregivers to return to their loved ones feeling refreshed and ready once again to help.

2. Bridge the divide with an aging parent using something that you — or both of you — love.

Safi is a professional photographer and has a talent for capturing the hidden, unadorned moments in American cities. “Photography,” she says, “is my window into understanding things.”

She began photographing her father partly for the same reason: to understand what the disease was doing to him and how it was affecting their relationship.

Her art, then, helped her to connect with her father in one of the most difficult moments of her life. It was an important step in taking care of herself.

By documenting this moment of profound change, she’s also come to reckon with some of the larger questions in life.

3. Remember that the disease and the person are not the same thing.

Caregivers can find themselves frustrated with the person they're caring for. That’s especially true if they're suffering from cognitive decline that often accompanies conditions like dementia. To avoid personal meltdowns, Safi found that an attitude adjustment helps.

“The things happening in front of you are not that person,” she says. “It’s the disease causing those things.”

It’s also important to remember a basic fact: We’re all human, and it’s not only OK but normal to feel frustrated in these kinds of situations.

This acknowledgment can help caregivers gain a sense of peace, which is a helpful state of mind while caring for an aging and temperamental parent.

Exercise can seem like a special privilege, something to be done in one’s spare time — but spare time may be fleeting for caregivers

Exercise, however, can make a huge difference and is worth setting aside time for. Studies show that physical activity can reduce stress and depression. It can increase one’s energy levels and improve sleep.

All that is huge for caregivers. Caregiving requires a tremendous amount of focus, energy, and positive-mindedness. So while exercise might seem like a privilege, caregivers should consider it an investment in their care.

That’s been true for Safi. She finds time for different forms of exercise, like going to the gym and taking short morning walks.

5. And, most importantly, remember that you’re not alone.

Caregiving can be an isolating experience with so many hours spent at a parent’s bedside. But caregivers are not alone. When Safi talked with her friends, she quickly realized that many were going through similar experiences and had parents suffering from conditions such as Alzheimer’s.

“There is this new bond bringing us together,” she says.

And, in fact, Safi was able to reconnect with old friends who are also serving as caregivers — old friends she loves but hadn’t talked to for a long time. Sharing their stories, she learned, was profoundly healing.

“The best remedy is to share information and learn from each other,” she says.

Caregiving can be exhausting, but by taking all these steps, Safi has come away with a new understanding of her father, of herself, and of the vision she has for her life.

And she’s seen just how resilient all of us can be.

“When you’re thrown into a situation where you have to be the strong one, you take the role,” she says. “When everything is crumbling around you, somebody has to be strong.”