He's a Syrian immigrant. He sells bananas. And you'll love him. 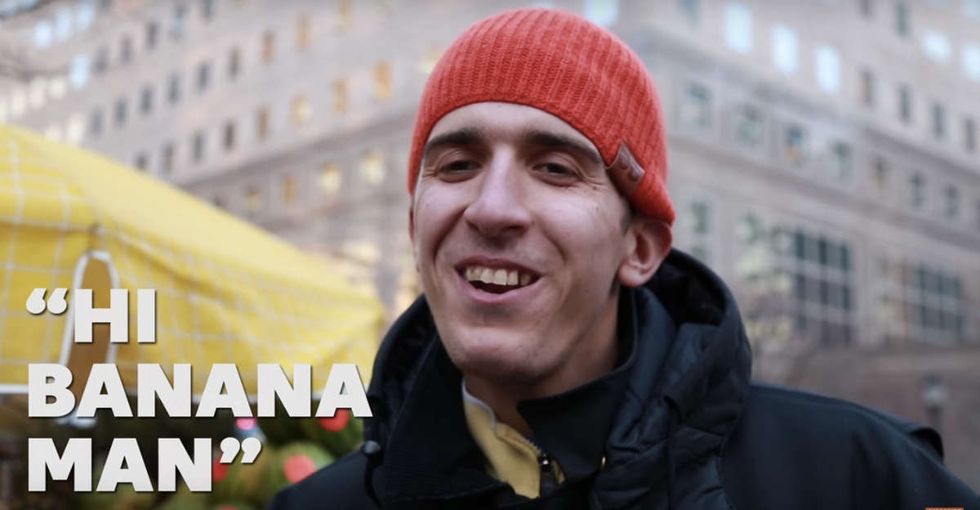 The kids call him Banana Man.

Everyone else? They call him Abdulhamed Kharma. He works as a fruit vendor in New York City.

He has many loyal customers. One even brought him a scarf and a pair of gloves to keep his hands warm in the winter.

And he's got big dreams.

He's an integral part of the community where he lives and works.

People need fruit, he sells them fruit. Without him, Tribeca, the neighborhood where he sets up shop, would undoubtedly be an avocado-less wasteland.

Like millions of his fellow New Yorkers, he's an immigrant.

When Kharma was 14, his family left their native Syria — traveling first to Turkey, then to Egypt, and finally to the U.S.

Like many immigrants, Kharma is grateful to the United States for giving him the chance to pursue his goals, which he believes would have been impossible back in Syria.

Despite all evidence to the contrary, Donald Trump and others are intent on portraying people like Kharma and his fellow Syrian immigrants, well ... like this stock photo:

Man, there are stock photos of literally everything. Photo via iStock.

When in fact, this is usually a much more accurate depiction:

Kharma's family was lucky to make their way to the United States long before Syria's current devastating Civil War. Since the conflict began, over 4 million people have fled the country. Most have landed in Turkey and elsewhere in the Middle East, and many others have made the dangerous crossing into Europe.

The United States has only committed to admitting 10,000. And even so, an intense debate rages over their status, with over half of all governors vowing to prevent refugees from settling in their states.

Kharma says that since 2011, when he tells customers that he's from Syria, some turn away. Others don't know what to say.

But his example demonstrates that, by and large, immigrants and refugees want basically the same things the rest of us want.

Like most of us, they want safe homes for their families.

Like most of us, they want education for their children.

Like most of us, they just want to sell bananas.

Despite the prejudice he sometimes encounters, what keeps Kharma going is his belief in the concept reflected by his last name.

It's all about karma, he says.

Put yourself in Kharma's shoes. You'll probably find they're not that different from yours.

Watch Welcometoterranova's conversation with Kharma below.