How a second-generation immigrant conquered Broadway as one of America's Founding Fathers. 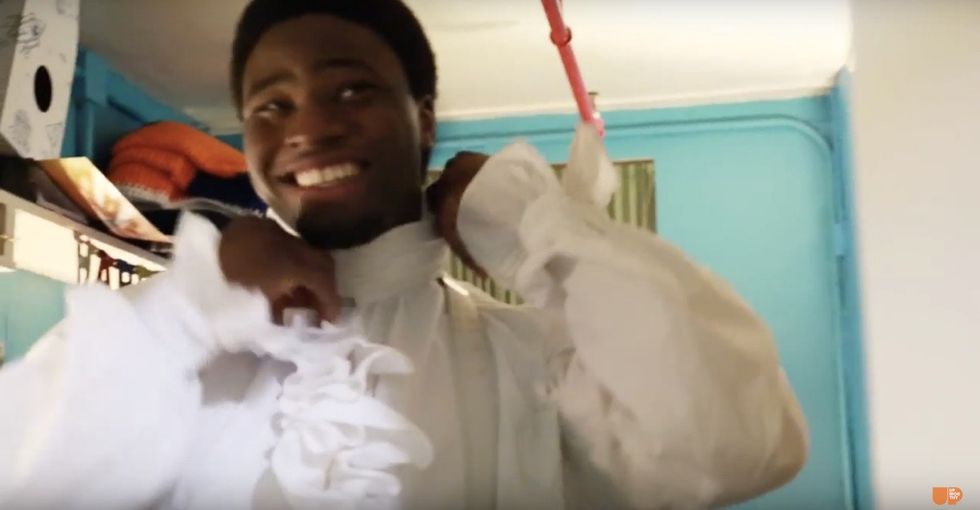 The young man fixing his puffy shirt is Okieriete "Oak" Onaodowan, 28, one of the stars of "Hamilton."

"What time is it? Showtime!" Well, almost. All GIFs via Welcometoterranova/YouTube.

"Hamilton" is a hip-hop-infused Broadway musical about the life of American's first Treasury secretary, Alexander Hamilton. In Act One, Onaodowan plays tailor-turned-spy Hercules Mulligan. In Act Two, he transforms into the father of the Constitution and eventual fourth president, James Madison.

He sat down with Welcometoterranova to talk about his background and what makes "Hamilton" such a success.

The show is a critical and box office darling, already selling over $70 million in tickets for shows through next January. But it's more than that, and stars like Onaodowan have everything to do with it.

Watch Oak's interview and scroll down to see why this show is so special.

Did Oak, a first-generation Nigerian-American, ever think he'd play a Founding Father?

Please elaborate for us, Oak.

And for good reason. His parents both hail from Nigeria and settled in New Jersey. Oak was born in Newark, raised in East Orange and West Orange. Since his parents didn't have a strong grasp on American pop culture, Oak picked it up on his own and with help from friends. Before long, he found his place on stage and was performing in local and regional productions as a poet and actor.

Soon he landed on Broadway, performing in "Rocky" and "Cyrano." Huge wins for any young actor.

But a starring role as a former president? Even Oak couldn't have imagined that.

Instead of casting white actors for the roles of the Founding Fathers, "Hamilton" creator Lin-Manuel Miranda sought a diverse group of actors and musicians to take on the challenge of bringing these historic figures to life.

"Hamilton" debuted at the Public Theater in January 2015 to rave reviews. After a nearly five-month run (and a few months of transition), the cast made its Broadway debut last August.

Oak has been a busy man ever since, performing to sold-out crowds eight times a week. The soundtrack (known as a cast recording) hit #1 on Billboard's rap chart, and the cast performed at the Grammys — also taking home the award for Best Musical Theater Album.

Miranda, Oak, and the rest of the cast accepting the Grammy Award for Best Musical Theater Album. Photo by Theo Wargo/Getty Images.

What is it that makes "Hamilton" unique?

If you ask Oak, the winning combination is quite simple.

"It's black people portraying old white men and getting everyone excited about American history," he said. "And us getting to understand these men through different faces."

What was that last part, Oak?

"And us getting to understand these men through different faces."

BOOM. There it is.

At its heart, "Hamilton" is such a powerful story because it makes these pillars of history, these fathers of our country, more accessible than ever before.

Through contemporary music and a talented, diverse cast, the show brings history to life. These American statesmen are no longer tired faces on the backs of coins. Their humanity is ever-present. We feel their fear. We empathize with their feelings of inadequacy and desire to be great.

For the first time, we're seeing these figures clearly — and lo and behold, they're a lot like us.

Performance is a powerful tool to explore a small part of someone else's lived experience. And actors like Oak Onaodowan make it possible, bringing charisma, guts, and heart to each show.

So when you pay to see live theater, it's not just a few hours of music in the dark. It's a chance to connect and be a part of something much bigger.

Now, on with the show.