How an app for tractors is actually changing lives for some farmers. 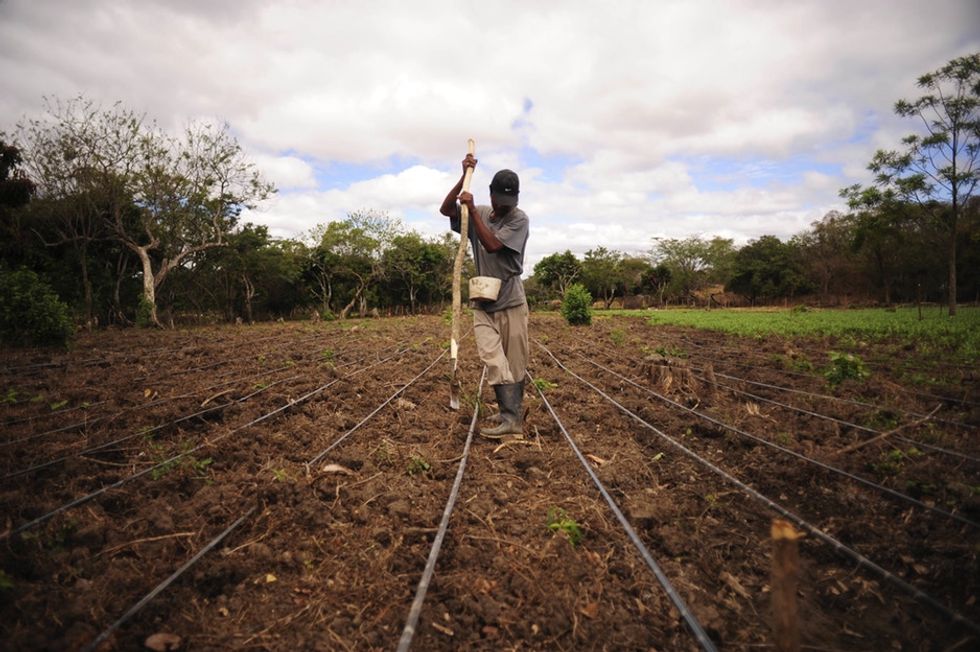 The plight of farmers has never been more real.

According to Tech Times, drought conditions and heat waves caused by an ever-warming planet have led to a 10% drop in worldwide cereal harvests in the past 50 years alone and could result in as much as a 30% loss in total global crop production by the year 2080.

With fewer resources, financial support, and social safety nets to lean on, the harsh reality is that underdeveloped countries will face the greatest setbacks as the effects of climate change continue to increase.

"People who are socially, economically, culturally, politically, institutionally or otherwise marginalised are especially vulnerable to climate change," reads a 2014 report by the UN's climate panel.

In countries with agriculturally based labor forces like Nigeria, these hardships often force farmers to outsource their labor in order to harvest what few crops they have.

Those who can't afford to pay for seasonal labor, however, are left with little choice but to underuse their land and lose out on the potential income that comes with it.

While something as simple as a tractor could be a huge help to addressing their financial woes, it's also something that many farmers can't afford because of said financial woes. Not to mention that most commercial banks in Nigeria charge a 30% interest rate and require loan repayment within a year.

This is exactly the kind of fiscal dilemma that apps like Hello Tractor are hoping to solve.

The brainchild of founder/CEO Jehiel Oliver, Hello Tractor is a revolutionary mobile app that connects tractor owners with nearby farmers in marginalized areas of sub-Saharan Africa for the purposes of renting out their equipment and skills.

With a simple SMS text message, a farmer in need can send a message requesting tractor services to the app, which will then connect to the nearest Smart Tractor (a tractor embedded with Oliver's low-cost GPS/telematics system) using local and cloud-based data to connect them.

Hello Tractor's system provides a quicker and cheaper alternative to hiring manual laborers and is off to a promising start.

According to TakePart, "Since Hello Tractor launched in the summer of 2014, farmers who participated in the beta period saw their yields increase by 200 percent using a machine that’s 40 times faster than manual labor."

Can't afford to rent a tractor? Hello Tractor's got your back on that, too!

In parts of the developing world with few banks and fewer credit unions, getting access to enough capital to buy a bag of fertilizer presents a difficult challenge in and of itself, let alone renting a tractor.

"The farmers operate on small plot sizes, which means they don't make enough money to invest in a big piece of machinery," Oliver told Fast Company/Co-Exist. "There also aren't bank loans for farmers, so it's pretty difficult to finance a tractor."

While one of Oliver's Smart Tractors can be rented out for just $75 per hectare (roughly 2.5 acres) farmed, Hello Tractor also takes things a step further by connecting farmers to microfinancing companies that can offer lower interest rates as compared with the nationally backed banks.

A report published by the World Bank last year found that farm plots harvested by women yielded 13% to 30% less crops per hectare than those produced by men. The biggest reason for this disparity lies not in the skill level of female farmers but the "more than unequal access to inputs [and] unequal returns to the inputs they have."

Hello Tractor, on the other hand, is using the anonymity of its users to narrow the culturally fueled wage gap between men and women.

"Uber has made it easier for a black man in New York to hail a cab. You request something through the cloud with no face, and that request is paired with the closest car. It sort of circumvents racism," Oliver told TakePart.

"The same is true of Hello Tractor: When they arrive with that tractor, you’re going to still want that service. This was our way of circumventing the negative gender stereotypes that exist in Nigeria — and they’re really entrenched here."

An app helping to end both poverty *and* inequality in the parts of the world that need it the most? Talk about a game-changer.