How an Arizona town made their own Christmas miracle.

The Yuma community built a special, inclusive, kid-designed playground. And after an arsonist burned it down, they built it again. 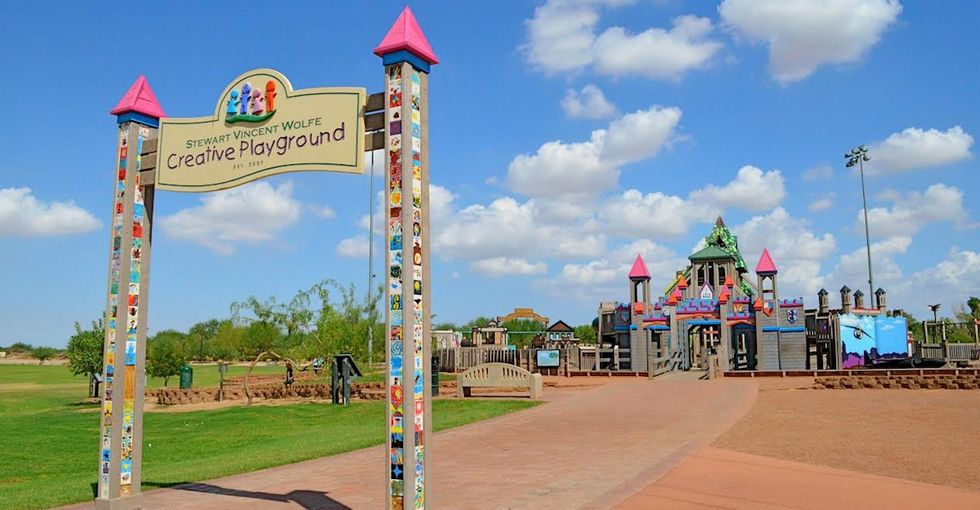 If you want to design the best playground, you’ve got to ask the kids what they want.

That's what Ron and Stephanie Martin of Yuma, Arizona, did. They wanted to remember their late friend, who loved being outdoors near the Colorado River, so they donated $100,000 to fund a creative playground. The land was set aside in late 2005.

To prepare, 5,000 schoolchildren drew pictures and gave suggestions to help come up with the design.

The Martins hoped the playground would be a place where all kids could have fun. Based on the kids’ requests, they planned to make the ground out of a squishy plastic for gentler falls. There would be an Old West area just for the tiniest kids. Paths would be wide and level for wheelchair access. And they'd even have adaptive swings for larger bodies with safety supports.

Following the Martins' donation, the Yuma community raised another $450,000 for the playground build.

Yuma sits on the corner of California, Arizona, and Mexico. Agriculture is big there with the Colorado River, but unemployment is over 20%. Raising that much money in a community of fewer than 100,000 people was a huge undertaking.

In 2007, everything came together. 8,000 volunteers built the park themselves in just 10 days. Halfway through, when there wasn’t enough money or people to keep going, drive-by fundraisers were organized, and a call went out for help.

Welcome to the Creative Playground! Photo via yumacastlepark.com, used with permission.

The playground officially opened in February 2007 and became the favorite park in town immediately.

Photo via yumacastlepark.com, used with permission.

It had features like a castle, dragon slide, climbing wall, airplanes, giant spider web, monkey bars, and a tree house tower. It was a kid’s paradise.

Then tragedy struck: an arsonist set fire to the Castle Park right after Christmas in 2014.

Photo via the City of Yuma, used with permission.

The special materials used for desert building melted and burned. It was a total loss.

But the playground had sparked something special within the Yuma community. It had given them a place to play and gather, no matter what else was going on.

So people immediately jumped in to help build ... again.

Within 24 hours, Yuma residents rallied to raise money to rebuild the park. Families donated a few dollars each. Some businesses pledged up to $10,000. A website was quickly established — YumaCastlePark.com — for updates. More than $70,000 was raised in the first few days, before the city heard that insurance would cover the loss.

Demolition cleared the way for the playground to rise again.

Families painted tiles to be included in the park design at community events during 2015.

No volunteers were needed this time — the insurance settlement included labor.

And so it was, less than a year after the fire, that Yuma celebrated a little Christmas miracle of their own.

Photo via the City of Yuma, used with permission.

Together, they welcomed back their biggest and best play attraction on Dec. 19, 2015.

The best part? The park is even better than it was before. Because insurance covered the fire, the funds raised right after the fire went toward a further expansion of the park. Now there are even more play areas for able and disabled kids alike to enjoy.

This story is about tragedy, yes. But it's also about the power of communities and the power of people to do something good for one another during the holidays. It's proof that no matter what, people are the strongest force there is.