How badass WNBA players responded when they were fined for protesting injustice. 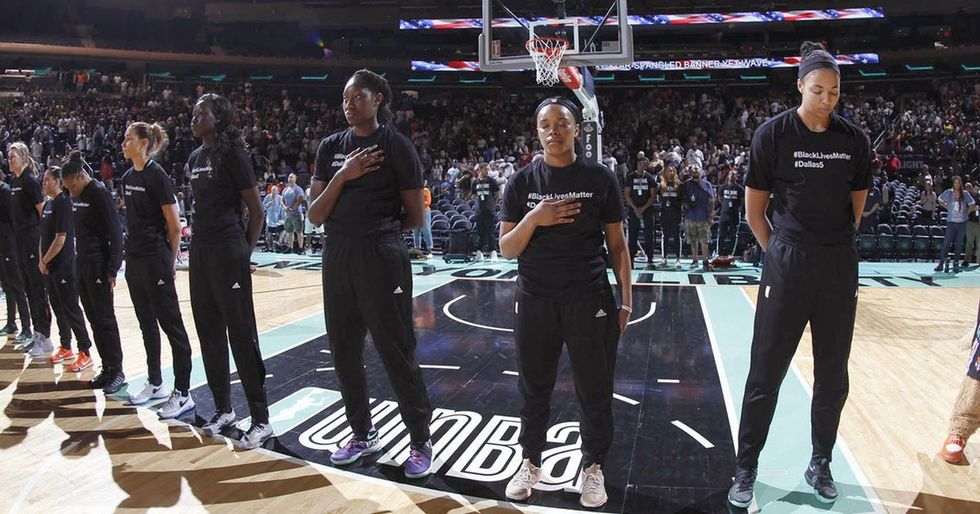 Hoping to show support for victims of recent police shootings and for the deaths of Alton Sterling, Philando Castile, and Charles Kinsey, several WNBA players wore shirts with Black Lives Matter hashtags on them to recent games.

According to the WNBA, however, these shirts are in violation of the league's uniform sponsorship policy, so the Indiana Fever, Phoenix Mercury, and New York Liberty were each fined $5,000 for their actions. Several individual players were also fined $500 for wearing the altered shirts.

The fines were frustrating, to say the least, and many players felt the need to speak up about the hypocrisy.

The WNBA is a league comprised mostly of black players, and many of the women are actively involved in advocacy around the Black Lives Matter movement.

While the league has this policy, it's important to note that NBA president Adam Silver didn't fine LeBron James and other NBA players when they wore "I Can't Breathe" shirts in 2014. And up to this point, the league had been fairly supportive of players speaking out on issues that mattered.

Indiana Fever forward Tamika Catchings was one of many players who called out the hypocrisy.

"Instead of the league taking a stance with us, where they tell us they appreciate our expressing our concerns like they did for Orlando, we're fighting against each other," Catchings said.

In response to the shirts, WNBA president Lisa Borders released a statement defending the league's decision and fines, referencing the league’s uniform guidelines and reminding the league that the women are not allowed to alter their uniforms in any way.

"We are proud of WNBA players' engagement and passionate advocacy for non-violent solutions to difficult social issues but expect them to comply with the league's uniform guidelines," Borders said.

While rules are certainly rules, financially penalizing players who already make significantly less than their male counterparts in the NBA is pretty unfair... especially in a league that's been outspoken in defending a multitude of issues in the past, from LGBTQ issues to health initiatives.

Many players feel that the WNBA's lack of support for Black Lives Matter shows how out of touch the league is when it comes to the lives of its players.

Tina Charles, a player for the New York Liberty, wrote a great response about choosing activism over silence on her Instagram page:

“Seventy percent of the WNBA players are African-American women and as a league collectively impacted. My teammates and I will continue to use our platform and raise awareness for the #BlackLivesMatter movement until the WNBA [gives] its support as it does for Breast Cancer Awareness, [Pride] and other subject matters.”

With the sheer amount of women of color in the WNBA, league officials probably shouldn't be surprised that their players are outraged about the recent shootings, as race relations affect them on a personal level.

And handing out fines for players' peaceful actions represses their right to speak out against injustice and it sends a message that police brutality isn't a topic that should be discussed. Plus, the players' activism followed a legacy of many athletes' protests before them, such as Muhammad Ali being outspoken about his views of the Vietnam War, players from the St. Louis Rams marching out with their hands up after the Ferguson shooting, and LeBron James when he wore an "I Can't Breathe" shirt after Eric Garner's death.

The actions of leagues and sports teams largely affects public perceptions of issues.

When the Super Bowl pulled out of Arizona in 1990 because the state refused to honor Martin Luther King Jr. Day or when the NBA announced their recent ultimatum about North Carolina's discriminatory anti-LGBTQ bathroom law, it made an unmistakable statement.

Some people tend be uncomfortable with the Black Lives Matter movement because they think it's an attack on police. In reality, Black Lives Matter was created to stop violence, not ignite it, and to call out injustice in a blatantly corrupt system. But when key players and public figures, like the women of the WNBA, stand behind issues like Black Lives Matter, even a stand as simple as T-shirts, it matters. It moves the movement forward in the best way.

The WNBA players' fight for advocacy isn't just impressive. It's American to the core.

As these women speak out against a system of injustice in a peaceful and empathetic way, I hope we can all listen.

By peacefully protesting, listening to people of color instead of ignoring them, and supporting efforts to create trust between communities of color and law enforcement, we can stand by what WNBA players and many other athletes of color have already stated: Black lives matter.