How it feels to navigate a gym locker room when you're transgender.

People like me don't often feel welcomed. Let's change that. 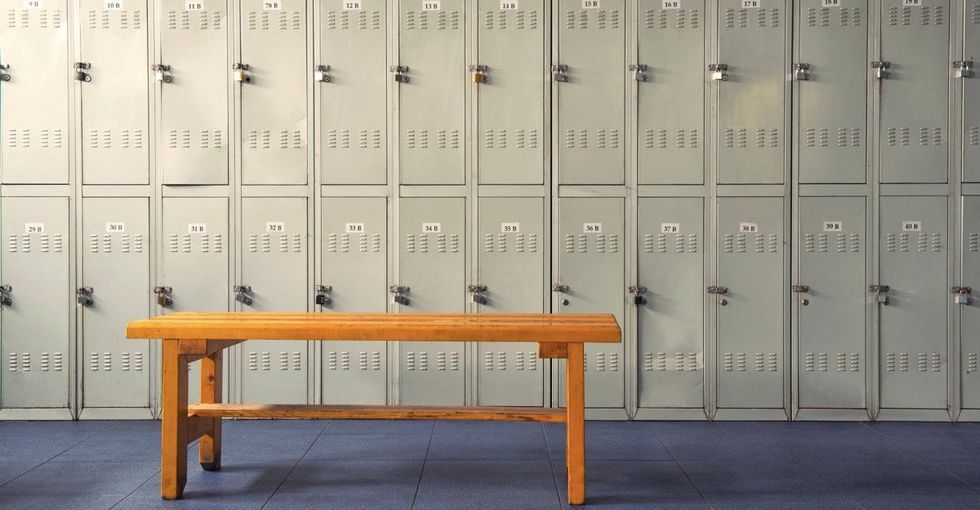 Here's the thing about locker rooms: I avoid them whenever humanly possible.

I go out of my way to steer clear, heading into the gym wearing exactly what I plan to work out in and carrying nothing else with me. This means that, yes, there are days where the temperature is in the 20s or 30s, and I'll venture out without my coat as a way to avoid locker rooms.

On days where I absolutely have to use them, I do whatever I can to get in and out of the locker room as quickly and quietly as I can.

Here are my four stages of locker room interaction:

2. Immediately to the left is a row of (usually) empty lockers. That's my reluctant second.

3. If that row is full, I carry my belongings with me as I work out.

4. If that's too cumbersome, I just go home without working out.

This is my gym. As you can see, I do my best to go when I think the fewest people will be here.

It sounds bizarre, right? But ... one thing you may or may not know about me is that I'm transgender.

I'm pretty open about it, but it's not as though I wear a sign around my neck informing the general public — the vast majority of the time, strangers don't know. My life just is what it is: pretty boring.

But yes, being transgender is part of why I avoid locker rooms.

Here's me after a workout.

I've never put on or taken off an article of clothing in my gym's locker room nor do I plan on it anytime soon.

And I've never actually seen anybody else in there at the same time as me. But, I can't help it — during those few seconds I plan out so carefully, my anxiety rules over me — because I'm afraid.

I'm afraid of anybody else stepping through that door.

I'm afraid of being yelled at.

I'm afraid of being asked whether I'm in the wrong room.

Now, it's not as though those thoughts are especially logical, but I guess it doesn't matter. Anxiety and fear don't follow rules of logic.

But for so many of us, these thoughts and fears can be all-consuming.

Sadly, trans women being attacked in public restrooms and locker rooms is a reality in our world.

People set on fighting against trans rights have made regulating bathroom access a concerning focal point of their agenda.

But the strategy of trying to legislate who can use which bathroom is based on misinformation about exactly who is helped by these types of ordinances and what they allow for.

For example, unlike what Mike Huckabee thinks, anti-discrimination laws allowing trans people to use bathrooms that match their gender identities would not have allowed him, a cisgender man, to enter the girls' locker room when he was in high school just for fun:

Former Arkansas Gov. Mike Huckabee talks about how he would have tried to abuse these laws during his teen years.

One tactic anti-trans groups use to try to roll back or block non-discrimination ordinances is sending cisgender men into women's locker rooms.

Cisgender men are men whose gender identity matches the gender they were assigned at birth. This happened just a couple weeks back, actually, when a cisgender man walked into a women's locker room, took off his shirt, and stood there until somebody complained. After being kicked out, he returned hours later, again invading the locker room while young girls were changing for swim practice.

The groups behind these anti-trans efforts are pretty open about encouraging these tactics. They terrorize women and children as a way to show their supposed concern for those same people.

It's sick, but it has absolutely nothing to do with people like me.

Trans people aren't going into locker rooms, walking around naked, and leering at others. Sick men who want to "prove a point" are. They're trying to trick you into being scared of trans people. Please don't fall for it.

Deal with them, don't let them win, and don't take it out on us.

Right now, I'm afraid, but I have hope for the future.

There's currently a bit of anti-LGBTQ backlash going on in the wake of last year's marriage equality wins (and trans people are just the easiest target to take that out on, sadly), but I've seen the public fear of gay and lesbian people shift a lot just in the past few years, and I have hope that those feelings toward trans people will pass soon too.

I have hope for a more tolerant and accepting world where people don't need to feel afraid when doing something as simple as using the bathroom or changing in a locker room. I have hope that we're all going to be OK.