How some Syrian refugees can pay for food with the blink of an eye. 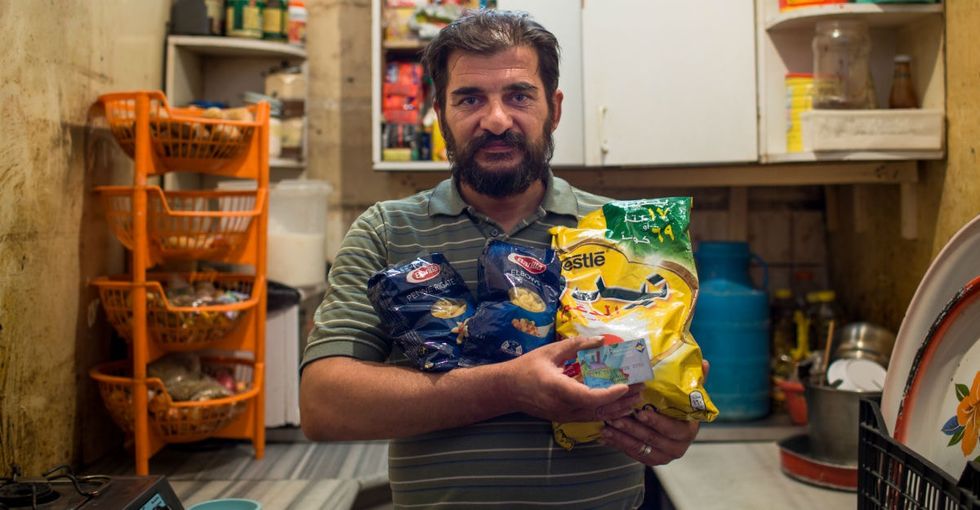 "I used to be a farmer, growing tomatoes and potatoes ... I dream to go back home."

It was 2012 when Abu Alaa finally decided to flee his country with his wife and five kids amidst the dangerous Syrian conflict that took the life of his brother and burned down his house.

Still, it was hard for him to leave home. And it's hard for most people to even imagine being put in that situation to begin with.

Syrians like him have gone through unthinkable hardships in the past few years.

Since 2011, more than 650,000 Syrian refugees have fled to Jordan for safety due to the ongoing conflict back home.

They now make up 10% of Jordan's total population — that's a lot of people to take in over such a short amount of time. While some countries have been criticized for turning their backs on refugees, Jordan has opened its arms to them.

As many refugees have tried to start over in camps or in urban areas of other countries, in dire conditions with very little to their name, it begs the question: Is it possible to maintain a sense of normalcy?

It's a loaded question, and for most, the answer is an instant "no." But in Jordan, United Nations-based Better Than Cash Alliance, a global partnership of governments, companies and international organizations, are working together to see how digital technology can help take a load off for refugees.

Jordan is using digital methods to make life — and accessing food — as easy as possible for Syrian refugees.

Some of these programs are creating promising solutions in a tough situation.

All images used with permission from Maria de la Guardia/Better Than Cash Alliance, unless otherwise noted.

E-cards give refugees a voice and a choice when it comes to the food they eat.

When people's entire lives are uprooted and they're forced to start over with next to nothing, the two most basic things for survival are food and shelter. The World Food Programme's (WFP) got the food part down.

Their updated approach to food assistance in Jordan says "no more" to the old methods of beneficiaries waiting in long lines to obtain paper food vouchers or to be handed items they may not even need. Instead, the WFP is working to put the control back in the hands of the Syrian refugees in Jordan through e-cards.

Every month, refugees receive a simple text message with the amount they are able to receive through the WFP. They can then go to one of over 200 markets in the country to choose the items they want, and they purchase them with their WFP e-card.

"I feel more secure using the e-card and am able to buy a range of products. I care more about quality, and the quality at this market is good," said WFP beneficiary named Kifah (pictured above).

The e-card looks and works just like a debit card for the most part — and that's the point. This digital payment method brings more dignity and normalcy back into the lives of Syrians who used to use debit and credit cards in their everyday life back home.

Digital payments used by refugees are paying off for Jordanians too. Since 2012, the voucher programme for Syrians has pumped almost $600 million back into the local Jordan economy, according to the WFP.

Some refugees can even pay for groceries with the blink of their eye.

Paying for items with your eyeball? In our digital age, it seems like something that could happen in the distant future. In Jordan, it's already very real for many Syrian refugee families.

Thanks to a partnership between the United Nations High Commissioner for Refugees (UNHCR) and Cairo Amman Bank, Jordan is the first country to use iris scan technology to allow refugees to access cash grants from participating nonprofits.

It works like this: You look into the device and it'll scan your iris, registering who you are and allowing you to purchase food items from markets or to take out money from an ATM. No additional identification or pin numbers needed.

You've just gotta be you — and what's easier than that?

The system has been so successful that it's being expanded to other regional countries to help aid in the Syria crisis.

Not having to carry as much cash around helps refugees feel more secure in their environment. And with iris scans in particular, an anti-fraudmeasure eliminates the possibility for others to pretend to be someone else and use their resources.

In the unfathomable situation millions of Syrians have been forced into, e-cards and iris scans help — but they can only do so much.

Many still have difficulty affording rent and accessing the health care they need. And the food assistance, while helpful, still isn't enough to get them back on their feet.

But there is no doubt that incorporating digital solutions does provide a silver lining. Even in the hardest of times, people are finding ways to use technology to improve conditions and to help restore dignity in the lives of Syrians.

As one refugee expressed, "I hope for freedom and for my kids to grow up feeling free and safe and empowered."

Perhaps technology will play a part in keeping that hope alive.