How this accountant went from crunching numbers to changing worlds.

“When you create change, you will be change.” 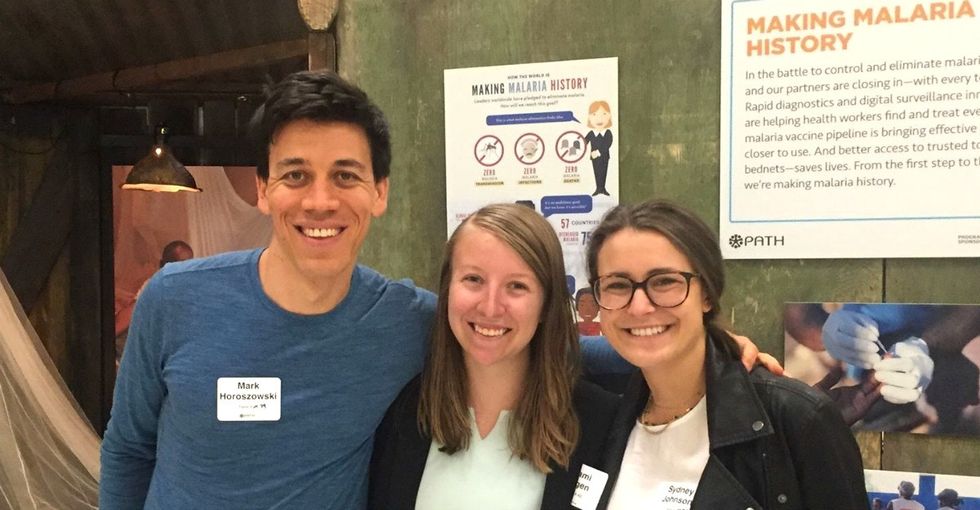 Mark Horoszowski, cofounder of MovingWorlds.org, learned the benefits of giving back at an early age.

His parents immigrated to the states from Slovenia and Poland with next to nothing, like so many other families at the time, and so were used to simultaneously helping those in need and receiving help in return.

"Helping each other is just part of what that community did," recounts Horoszowski. "We were always doing things to be supportive."

With that volunteering gene firmly ingrained, he went on to join the Boy Scouts, then participated in student leadership programs. In college, he volunteered with The American Cancer Society’s Relay for Life program and even helped start one at his school.

When it came time to graduate, Horoszowski’s volunteer work gave him a leg up in the accounting job market — his field of choice at the time.

Horoszowski ended up accepting a position with a prestigious accounting firm but quickly discovered something strange: Though his volunteer work helped him land the job, they didn’t want him to continue it once he was part of the company.

Such a work environment felt limiting to Horoszowski, so he decided to leave and join a young health care marketing group.

He spent two and a half years there learning digital and social media marketing strategy, but he longed to learn more about international social entrepreneurship.

In 2010, he packed his bags and set out on a yearlong journey around the world that would change his life as well as the lives of many others who would later follow in his footsteps.

Everywhere he went, he volunteered his skills in exchange for advice in social entrepreneurship.

As his journey was coming to an end, he met his soon-to-be cofounder of Moving Worlds, Derek Norde.

Norde had spent the last decade helping social good start-ups access capital so that they could grow, but he was often left frustrated.

"I'm so tired of all these social good orgs asking for money when they actually need accounting systems or marketing plans first," Horoszowski recalls Norde saying.

That complaint ended up being the spark of inspiration for their organization.

Horoszowski's travels and connection with Norde led to Moving World's mission: "To help get expertise to the parts of the world that need it most, but also provide transformative experiences for the people giving that expertise."

Moving Worlds essentially acts as a matchmaker between organizations looking to solve challenges and professionals looking to have an immersive volunteer experience.

"I really liked their approach and ethos to work through local organisations, and to make them sustainable in the long run: From giving them the skills to fundraising to supporting their social enterprise partners throughout Peru. I also liked that LAFF supported educational charities, particularity for young women; for me, education is the most important tool we have to break the cycle of poverty." #Experteer Andreas working with @laffcharity in Peru.

Each professional (or "experteer" as Moving Worlds calls them) is placed based on their skills and the country they'd like to explore. If experteers want to stay in the states, that's an option too.

The hope is the pairing will become a partnership in which both sides will benefit in some way. Or as Horoszowski puts it, "when you create change, you will be change."

These transformative, immersive volunteer experiences seem to appeal most to millennials, especially when they can utilize their skills.

Use your #professional skills to volunteer abroad & make a real #impact. (@glowingvero_ontheroad #experteering with @awamakiperu)

According to the Case Foundation's 2015 Millennial Impact Report, "77% of millennials said they're more likely to volunteer when they can use their specific skills or expertise to benefit a cause."

This is a generation of optimistic doers who genuinely believe their actions can make a difference, even if they’re not exactly sure how yet.

One prime example is Erin Dowd — a teacher who was falling out of love with the idea of teaching when Moving Worlds brought her to a group called the Honduras Child Alliance. She ended up assisting them with teacher training and curriculum development and realized the latter area of education was her true passion. Through her work there, she ended up being connected with an organization called Level Up Village, where she is now the director of curriculum.

Just like that, both sides of the volunteer partnership were changed for the better.

As for the experteers who return to the states at the end of their program, they often continue volunteering locally using the same principles and skills they’ve acquired with Moving Worlds.

It may seem strange to think of volunteering as giving and getting, but in Horoszowski’s experience, that’s what makes it work.

"Even if giving should be totally selfless, the reality is when it’s done that way, human behavior kicks in over time and people start falling out, which ends up being more harmful to organizations over time," he explains.

Combining social awareness with career prospects is the perfect way to get millennials (aka the definitive multitaskers) involved. But it's not just about prospects — current employees can benefit from partnership volunteering as well.

Say an employee gets feedback that they need to work on a certain skill set, such as problem-solving. What if instead of having them take a course or go to a conference, the company sends that employee experteering? The employee then gets useful experience in the field, an organization gets assistance from a skilled volunteer, and the company comes out of it with an improved employee and philanthropy points. Everybody wins.

Moving Worlds can help millennials and employers realize a more mutually beneficial way of volunteering for the modern world.

Horoszowski said it best: "Imagine how much good will be created when more people encourage those around them to volunteer in ways that make them, and the world, better."