How this grandma feels after a video of her joyfully voting for a woman went viral. 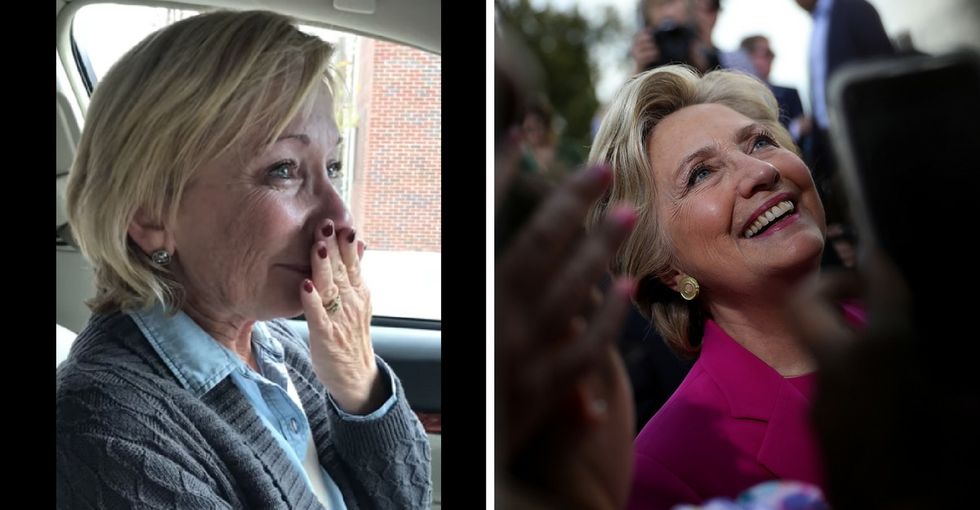 America may very soon have a female president for the first time. And the historical significance of that hasn't been lost on women like Vickie Wilkinson.

Wilkinson, a 60-year-old former teacher who lives in Montana, recently cast her vote for Democratic nominee Hillary Clinton — the first woman to be nominated for president by a major political party — and it was a day she won't soon forget.

"I got to vote for a woman for president," Wilkinson says through laughs and tears in the video captured by her daughter, Sarah Dean, who shared it online. "We finally made it."

The video quickly went viral, garnering millions of views across various social media platforms overnight. Although it's easy to understand why the video took off, Wilkinson's emotional experience isn't unique this election cycle — many woman know exactly how she felt in that moment.

Women across America have been itching for the chance to vote someone into the country's highest office who looks like them.

They've been itching a long time.

My grandma randomly just called me to tell me to go vote for Hillary and that was literally it lmao
— jakob (@jakob)1477673976.0

Older women in particular are feeling especially moved by their ballots this year.

(Of course, many women aren't supporting Clinton, but the gender divide is especially stark this year.)

Some of these voters were born before women even had the right to vote.

"It feels very wonderful," this 101-year-old noted of the experience, proudly sporting a patriotic sticker.

"This election means that women can achieve anything," 102-year-old Katherine Blood Hoffman of Florida said while waving her American flag.

Katherine Blood Hoffman, 102, Tallahassee: “This election means that women can achieve anything” #ImWithHer https://t.co/3ta5Zwljco
— We the Resilient (@We the Resilient)1477262464.0

Understandably, getting to cast a ballot for the first female presidential candidate who has a chance at winning is a big deal.

But the fact that Clinton is a woman isn't the only reason these women are excited to vote for her.

They're not voting for her just because she's a woman — she's a woman who also represents them, their values, and their vision for the future. Wilkinson, for example, supports Clinton's plans to take on gun violence, address children's issues, and fight for gender equality in the workplace.

“I think that women do have a particular viewpoint to bring into the arena,” she said.

But we also shouldn't dismiss the fact that Clinton simply being a woman in and of itself makes a difference. Acknowledging the importance of Clinton's gender isn't playing the "woman card," as some like to put it — it's celebrating another momentous step forward for our country.

Take a look at 98-year-old Emily, who can't contain that smile.

Or 98-year-old Estelle, who looks over the moon holding her absentee ballot.

These women, more than anyone else, have every reason to feel great about helping make history.

Wilkinson says she's been stunned by the overwhelmingly positive reactions she's gotten to the video after it spread across social media.

“The wonderful things that people have said have reinforced that I’m not the only person that feels this way," she says, noting the barrage of kind messages from both friends and complete strangers who had similar experiences casting their ballots.

Beyond what a woman in the White House means to her personally, Wilkinson understands the crucial message seeing a female president will send to young people.

“It was equally as awesome to vote for a black man for president,” she says. “But I’m a woman, and I have a beautiful daughter, and a wonderful step-daughter, and granddaughters — I’m so excited for them because they don’t have to look at the world the same way I did.”

“I’m listening to my 12-year-old granddaughter now, and she’s very thrilled that this old-fashioned view of, ‘Oh, well only boys can do this’ is now gone," she says.