How Viola Davis is changing Hollywood makes her Walk of Fame star that much cooler. 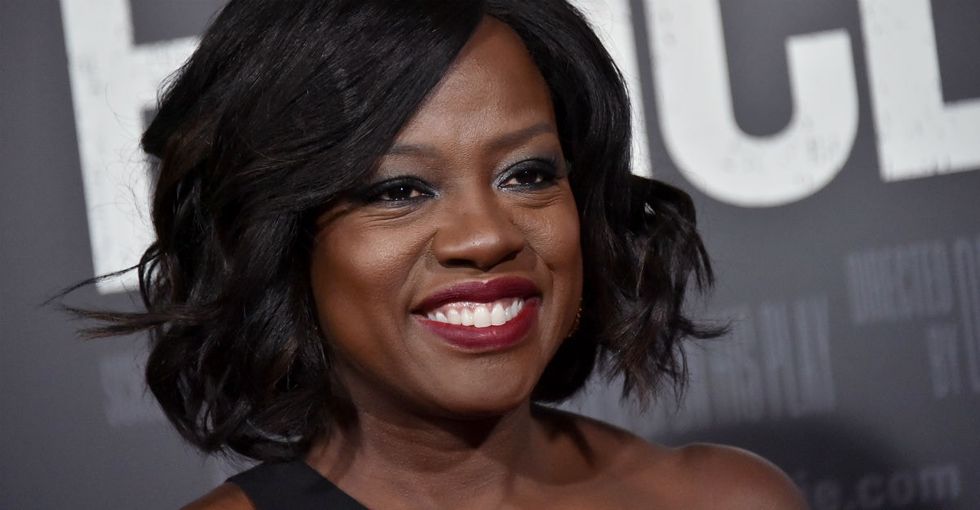 The 2,597th star on the Hollywood Walk of Fame is going to Viola Davis.

The ceremony for Davis, who Walk of Fame producer Ana Martinez described as an actress "who always mesmerizes fans with her talent," is set for Jan. 5, 2017.

Davis rose to stardom after 2008's "Doubt," then snagged an Academy Award nomination for her performance in 2011's "The Help," and is currently starring on ABC's "How to Get Away With Murder" ("HTGAWM"). There's also Oscar buzz surrounding her performance in the Denzel Washington-directed "Fences." She's certainly deserving of the honor on merit alone.

Powerhouse performances aside, the news about Davis' Hollywood star feels especially right at this time given that she's often been the empowering, important breath of fresh air Hollywood so desperately needs.

Here are seven reasons to be excited about Davis' star on the Walk of Fame:

1. Davis was the first woman of color ever to win an Emmy for Outstanding Lead Actress in a Drama Series in 2015.

"The only thing that separates women of color from anyone else is opportunity," she said on stage during her historic victory. "You cannot win an Emmy for roles that are simply not there." She's got a point: Leading roles for black women are few and far between.

2. Davis currently stars on ABC's "How to Get Away With Murder" as Annalise Keating, a queer woman of color — a type of character we don't see nearly enough.

Along with the lack of opportunity for actors and actresses of color, there's also a lack of on-screen positive representation of certain groups within the LGBTQ community. Keating, a successful lawyer, isn't defined by her bisexuality nor does the character fall into the damaging tropes we often associate with bisexual people.

"I loved the relationship," Davis told AfterEllen of Keating's on-screen romance with a woman. "There was something so natural about it. And I just thought it made sense because I think in Annalise’s life, she just migrates toward anyone who shows her love."

3. Davis demanded she not wear a wig, weave, or makeup during a powerful scene in order to better reflect underrepresented women.

"I was so adamant about it," Davis said of fighting to be wig and makeup-free in the scene on "How to Get Away With Murder." "I said, 'Listen, she can’t go to bed with her wig on. She cannot be in that bedroom with her wig on because women don’t go to bed with their wigs on.' And I said, ‘A whole portion of women out there are marginalized. I want to be a real woman. Let’s go for it.'"

GIF via "How to Get Away With Murder."

There's a long history of black women being told their natural hair is unprofessional, ugly, and distracting. Because of these (super racist) perceptions, it's not every day we see black actresses rocking their natural looks on TV. While there's of course nothing wrong with any woman wearing wigs or styling their hair whichever way they please, Davis' decision to go au naturel meant a lot to many women watching.

4. Davis has become a body-positivity champion in an industry that could use a lot of work on the topic.

At the Critics Choice Awards earlier this month, Davis accepted the first-ever #SeeHer Award, which was created by a campaign aimed at ending bias against women in the media. Her acceptance speech, focused on staying true to yourself and discovering the privilege of being who you are, instantly went viral:

"You know, when I was handed Annalise Keating, I said, 'She’s sexy, she’s mysterious, you know?' I’m used to playing women who gotta gain 40 pounds and have to wear an apron. So I said, 'Oh God, I gotta to lose weight, I gotta learn how to walk like Kerry Washington in heels, you know, I gotta lose my belly.' And then I asked myself, 'Well, why do I have to do all that?' I truly believe that the privilege of a lifetime is being who you are, and I just recently embraced that at 51."

Photo by Christopher Polk/Getty Images for The Critics' Choice Awards.

5. Davis has spoken out about the absurdity of women — especially woman of color — getting paid less than men for doing equal work.

Actresses — even the most accomplished, successful ones — routinely get paid less than their male counterparts. It doesn't sit well with Davis.

"I’m sorry, if a woman does the same job as a man, she should be paid the same amount of money, she just should," Davis told Mashable in February 2016. "But at the same time, with me as an actress of color, I have to say to probably contradict myself, that’s not something I think about on a daily basis. Because the struggle for us as women of color is just to be seen the same as our white female counterparts."

6. Davis won't accept the unfair ways Hollywood portrays women of certain ages and body sizes when it comes to their sexuality.

"We've been fed a whole slew of lies about women," she told Elle in January 2016. "[On TV], if you are anywhere above a size two, you're not having sex. You don't have sexual thoughts. You may not even have a vagina. And if you're of a certain age, you're off the table."

7. Davis understands that life is too short to give any credence to the haters. Instead, focus on the people who love you just the way you are.

"When my father was passing — it was really a short period of time — I think that started the ball rolling," Davis told Oprah in 2012. "You don’t have time. You’re on this earth for a dash of time, really, and then that’s it. ... Knowing that, it just changed everything. I felt like I don’t have any time to stay up all night, worrying about what someone who doesn’t love me has to say about me."

Davis' acting chops are more than enough to land her a star on the Hollywood Walk of Fame, period. But the icing on the cake tastes so much sweeter knowing the star's going to an actress making this world a better place off-screen, too.