I bet you don't know the real history of the gin and tonic. It's crazy.

Turns out your favorite drink might have a super-weird history. 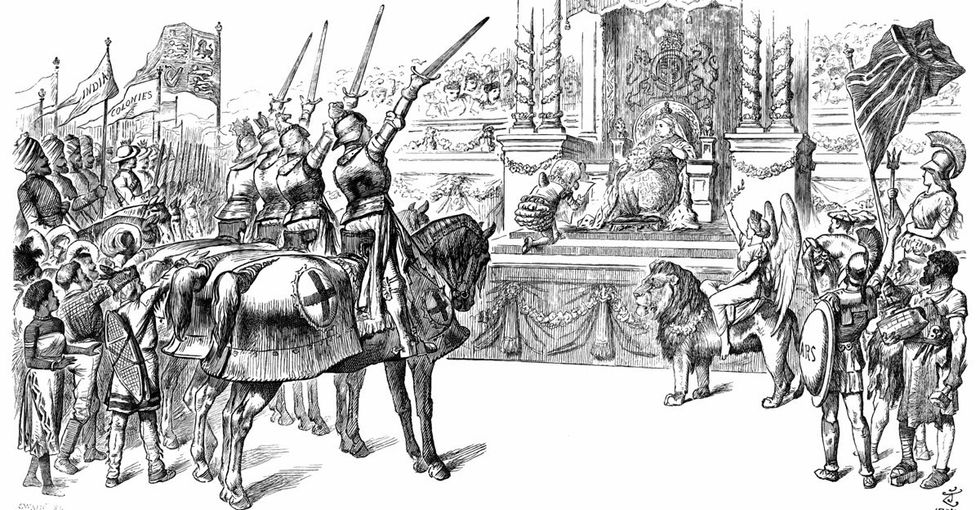 This story is about gin and tonics. But it starts with Britain taking over India.

Actually, it wasn't even Britain that did that at first. Let's back up even further, to where the story actually starts, which is with a trading company in the 1600s called the British East India Company.

Long story short, the East India Company came to India and they were like, "Oh, hey, is it OK if we put a factory here in this coastal city?"

India was like, "Yeah OK, I guess." But then the company was like "OK, well, how about a shit-ton of factories everywhere? Is that OK?"

So the company was like, "Oh, OK, no, we totally understand, all good!" And then they sent in their private army to take over a bunch of stuff and claim it as their own. Seriously.

Of course, India ended up fighting back, but then the whole United Kingdom got involved and just took over India, 'cause it was the 1800s and people didn't understand how colonialism was super messed up.

At this point, India was suddenly under British rule. Which the British really liked. Oh, except for the malaria.

Things seemed really bad for everyone involved. But then! Someone remembered this tree in Peru that had a special property that helped prevent malaria. "Why don't we grind it up into a powder and call it quinine and all not die?" this person said.

England came up with a great plan of giving this new anti-malaria medicine to its soldiers. Smart!

So every soldier now had a daily ration of quinine. But there was one problem: It tasted super bad. Like, really, really bad. It's super bitter. Even if you add water and a ton of sugar, it's still super funky.

Then someone had the bright idea of adding a ton of alcohol to the tonic. Because why not, right? And so the troops were like, "Cool, what alcohol do we have? Oh, here's a ton of gin. Yup, just dump it on in there."

And there you have it: gin and tonic.

All the soldiers were like, "Hey, this is actually kind of nice. Also, I'm no longer dying of malaria!"

Fun fact: It's not just that it tastes better 'cause it's suddenly alcoholic. Turns out, it's actually chemistry that makes it taste so good. A bunch of the different flavor molecules in gin kind of dog-pile onto the super-bitter quinine and hide it from our tongues, making the whole thing taste less bitter and more herbal!

Eventually, all the British soldiers in India started drinking the ol' G&T.

And then they did.

Oh, and what happened to India?

Well, suddenly it was the 20th century and that whole colonialism fad turned out to be not so popular anymore, especially with the people who, you know, had their countries taken away from them.

So these people started pushing back against British rule and eventually kicked them out in 1947! Woo!

There you go: the twisted, surprising, colonialism-based story of the gin and tonic.

So clink those glasses to weird history. Cheers!

From Your Site Articles
Related Articles Around the Web
school