If you look at her hands, you'll see her struggles. Literally.

Who knew a bucket of water could be so hard? They do. 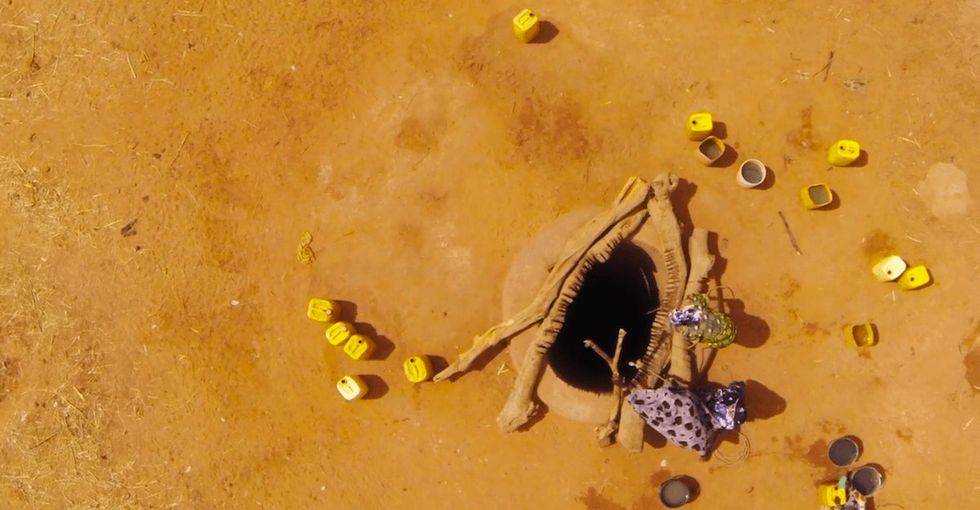 Aissa lives in Sahel, a region south of the Sahara Desert, in Niger.

Sahel is notorious for its lack of water.

Near Torombi Village, where Aissa lives, there is a very deep well.

That's where the village women get their water by hauling it up in buckets.

Pulling up buckets of water is harder work than you'd imagine.

Just ask the women about their hands.

"When you get used to drawing water, you don't feel the pain any more. The first time you draw water, the skin pulls off and your hands bleed, but you continue to draw water." — Aissa

But worse than having bleeding and blistering hands? Falling into the well, which is exactly what happened to Aissa — and her daughter.

Aissa yelled for others to come save her daughter:

"Just save my child! I know that I will surely die. Let my child go back home and may God bless her."

Ultimately, they were OK.

But the danger that comes just from trying to get water remains.

Watch below to see Aissa tell her story, as well as the story of another village, Sourountouna, that has found a way to battle the scarcity.

While the campaign the video refers to began in September 2014, the message is still HUGELY relevant. There are still so many people who risk their lives just to get drinking water.

Security cameras showed a kid 'tearing it up' in his driveway each night. So he took adorable action.

Most of us had one of those neighbors growing up—the one who gave us the stink eye if we so much as looked at their perfectly mowed lawn and shooed us away if even our shadows crept onto their flower beds. There's a reason "Get off my lawn!" was a meme before memes were even a thing.

Then there are neighbors who rock. The ones who smile and wave through the window and share their fresh-baked cookies with the neighborhood kids. The folks who genuinely enjoy the vibrant energy that children bring to the block and embrace the idea of "it takes a village."

When one of the guys behind Canyon Chasers, a motorcycle enthusiast website, shared a video of how he handled a kid who kept playing in his driveway when he wasn't home, it wasn't clear at first which kind of neighbor he was going to be. But then he explains how his security footage showed a preschooler riding his bike around his flat concrete driveway every evening, and how he decided to do something about it.

As society has become more accepting of LGBTQ people, the average age people come out of the closet has dropped significantly, from 37 among those in their 60s to 21 for those in their 30s.

However, many people, especially those who are older, are never able to come out because of societal or familial pressures.

An adorable new video that went viral on TikTok shows it's never too late to be your true self. A woman named Aimee was having a conversation with her grandmother — who she assumed was straight — when she admitted to being attracted to women.

Aimee thought it was so important that she had to capture the conversation on video.

Remember the grieving orca who held her dead calf for 17 days? She just gave birth.