In 1790, a Jewish congregation wrote to George Washington. He wrote an amazing response. 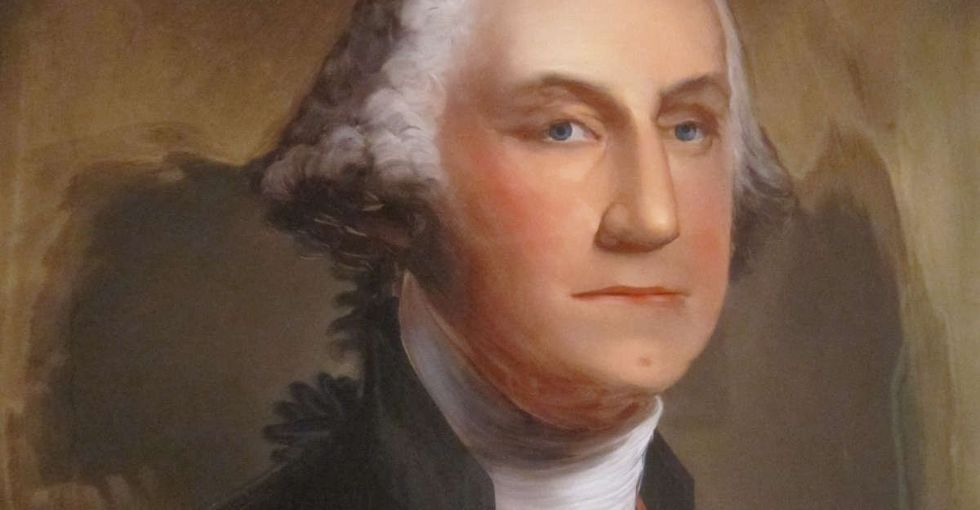 The father of our country — and a complicated man.

On the one hand, he defeated a global superpower in war, helped usher the world's first modern federal democratic republic into existence, and single-handedly established a system of peaceful presidential succession. Total pro moves.

Dude was literally money. Photo by the U.S. government/Wikimedia Commons.

On the other hand, dude owned literally hundreds of slaves. Definite negative 1,000.

But on the issue of religious freedom, Washington was on point.

Witness this amazing letter he wrote in 1790 to the largest Jewish community in America at the time, the Hebrew congregation of Newport, Rhode Island. The Newport Jews had sent a message to Washington, basically congratulating him on being awesome.

While I received with much satisfaction your address replete with expressions of esteem, I rejoice in the opportunity of assuring you that I shall always retain grateful remembrance of the cordial welcome I experienced on my visit to Newport from all classes of citizens.

The reflection on the days of difficulty and danger which are past is rendered the more sweet from a consciousness that they are succeeded by days of uncommon prosperity and security.If we have wisdom to make the best use of the advantages with which we are now favored, we cannot fail, under the just administration of a good government, to become a great and happy people.

The citizens of the United States of America have a right to applaud themselves for having given to mankind examples of an enlarged and liberal policy — a policy worthy of imitation. All possess alike liberty of conscience and immunities of citizenship.

It is now no more that toleration is spoken of as if it were the indulgence of one class of people that another enjoyed the exercise of their inherent natural rights, for, happily, the Government of the United States, which gives to bigotry no sanction, to persecution no assistance, requires only that they who live under its protection should demean themselves as good citizens in giving it on all occasions their effectual support.

It would be inconsistent with the frankness of my character not to avow that I am pleased with your favorable opinion of my administration and fervent wishes for my felicity.

May the children of the stock of Abraham who dwell in this land continue to merit and enjoy the good will of the other inhabitants — while every one shall sit in safety under his own vine and fig tree and there shall be none to make him afraid.
May the father of all mercies scatter light, and not darkness, upon our paths, and make us all in our several vocations useful here, and in His own due time and way everlastingly happy.

Here was the president of the United States telling one of his country's most vulnerable religious minorities: You're safe here.

Not only "tolerated," but endowed with rights — to live safely and worship freely — that can't be taken away by anyone.

For that reason, Washington's letter is read by many American Jews on Passover to this day.

These days, there are some loud voices who want to shut the doors that Washington wanted to keep open.

Thanks in no small part to President Washington's example, America's Jews are doing pretty OK these days. We do suffer a disproportionate number of religiously motivated hate crimes, but we're also pretty prosperous, educated, and integrated.

We've even got our own popular dating app.

However, with a massive refugee crisis rocking Europe and the Middle East, a leading presidential candidate...

Not naming names, not saying who. Photo by Mark Makela/Getty Images.

...has called for members of the world's second-largest faith — an impossibly diverse community of over a billion people — to be banned from entering the United States.

Over 30 governors have spoken out against resettling Syrians in their states.

Others have proposed admitting refugees, but only Christians.

These voices are, essentially, calling for a religious test in order to establish who can and cannot be American.

In times like these, we'd all do well to remember what President Washington said back in 1790:

"May the children of the stock of Abraham who dwell in this land continue to merit and enjoy the good will of the other inhabitants — while every one shall sit in safety under his own vine and fig tree and there shall be none to make him afraid. May the father of all mercies scatter light, and not darkness, upon our paths, and make us all in our several vocations useful here, and in His own due time and way everlastingly happy."

More than anything, that's who we are.

On Passover, a day when Jews all over the world celebrate their liberation from tyranny, it's especially important to remember.

Here's to making sure America remains a place where people of all nationalities and all faiths are welcome, safe, and free to sit "under their own vine and fig tree."