In 1994, a former Nixon aide explained the shocking real reason for the War on Drugs. 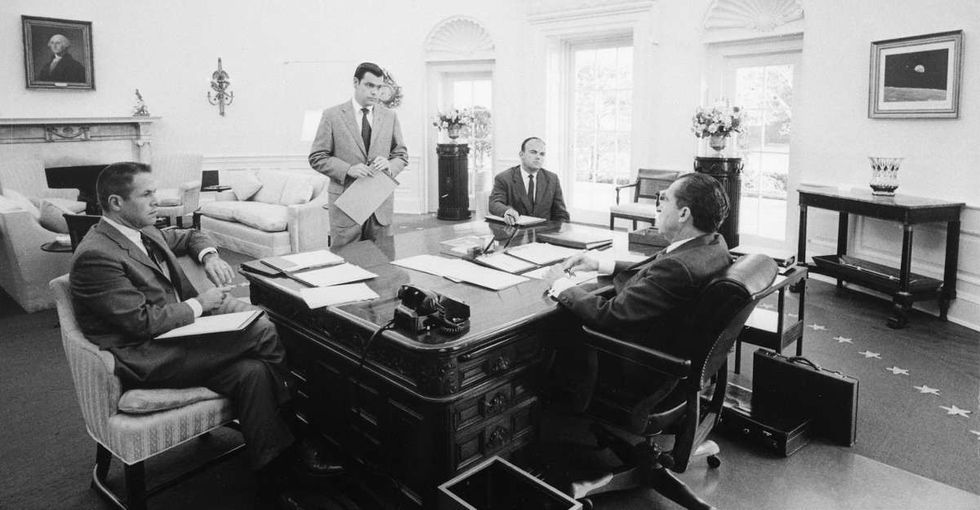 Amid the endless debate over the effectiveness of the War on Drugs, author and journalist Dan Baum just dropped a bombshell.

Writing in Harper's Magazine, Baum recalled a brutally honest interview with former Nixon adviser John Ehrlichman in 1994 about origins of the drug war.

Here's the money quote (emphasis mine):

"At the time, I was writing a book about the politics of drug prohibition. I started to ask Ehrlichman a series of earnest, wonky questions that he impatiently waved away. 'You want to know what this was really all about?' he asked with the bluntness of a man who, after public disgrace and a stretch in federal prison, had little left to protect. 'The Nixon campaign in 1968, and the Nixon White House after that, had two enemies: the antiwar left and black people. You understand what I’m saying? We knew we couldn’t make it illegal to be either against the war or black, but by getting the public to associate the hippies with marijuana and blacks with heroin, and then criminalizing both heavily, we could disrupt those communities. We could arrest their leaders, raid their homes, break up their meetings, and vilify them night after night on the evening news. Did we know we were lying about the drugs? Of course we did.'"

It's a stunning admission that appears to confirm the worst fears of opponents of the War on Drugs.

To hear someone suggest that America's drug enforcement policy was, in fact, born not of efficacy, but of naked racism and petty politics — and to know that person was actually responsible for crafting the policy — it's hard not to take them at their word (though some who have studied Nixon's administration have pushed back on Ehrlichman's claim).

Regardless, the drug war has fundamentally changed America — and the Western Hemisphere — since it began.

The change has been substantial and, it's hard not to argue, mostly for the worse, as many of Ehrlichman's predictions have largely come true:

Black Americans, meanwhile, were six times more likely to be incarcerated than white Americans in 2010, an increase from 50 years earlier, before not only the War on Drugs, but the civil rights movement.

Despite decades of draconian penalties for drug use and sales, the United States remains the world's largest drug market. This market is largely supplied by Latin American cartels, and attempting to combat them has exacted a devastating toll on their home countries.

Colombia's drug war has dragged on for nearly 50 years. Mexico's brutal conflict against cartels has seen over 150,000 killed since 2007, according to some estimates. Drug trade-related gang violence continues to plague Honduras, Guatemala, and El Salvador, leading to a massive outflow of migrants and refugees in recent years.

We've disenfranchised thousands of mostly black and other non-white voters in states across the U.S.

A 2010 study put the number of convicted felons who are ineligible to vote under state law at nearly 6 million — a group that's disproportionally African-American — many for drug or drug-related crimes.

Many criminal justice researchers believe that barriers like this, along with housing and job discrimination, can prevent former prisoners from fully reintegrating into society, which often leads them to commit further crimes.

What hasn't really changed since the War on Drugs began? People are still dying from drug abuse.

A memorial service for Benjamin Comparone of Connecticut, who died of an heroin overdose one year prior. Photo by John Moore/Getty Images.

While we continue to try to arrest our way out of the problem, our law enforcement-first approach has done little to stave off the massive heroin and opioid epidemic that's led to a 500% increase in deaths between 2001 and 2014.

It's time for an honest accounting of the way we address drug use and addiction.

A marijuana dispensary in Colorado. Photo by Theo Stroomer/Getty Images.

No matter how you slice it, it's hard to deny that we need a new approach.

In his Harper's Magazine piece, Baum argues, persuasively, for full legalization — to be accomplished methodically and carefully by expanding access to social services and treatment first (as Portugal did when it legalized drugs, to mixed results, in 2001).

Perhaps more importantly, he suggests establishing state monopolies over distribution of harder drugs like cocaine and heroin to help discourage consumption by removing the profit motive from sales.

Or, perhaps, it's simply a matter of supporting legislators who support bipartisan criminal justice reform and the decriminalization efforts (in which use is subject to a fine, but most sales are still considered felonies) currently underway in many states.

It might even be as simple as directing law enforcement to emphasize treatment for users over incarceration, like this pilot program in Gloucester, Massachusetts, which is already seeing some success.

Because Ehrlichman was wrong in one crucial respect: The War on Drugs isn't just a problem for black people and hippies — though black people especially, undeniably bore, and continue to bear, the brunt.

Nixon with his advisers. Ehrlichman is seated back left. Photo by Hartmann/National Archives and Records Administration.

The skyrocketing abuse deaths, massive prison population, and guerrilla conflicts make clear — it's an an issue for all of us.

"Did we know we were lying about the drugs? Of course we did," Ehrlichman said. When you add that to the imprisonment, addiction, death, and broken lives left in the wake of trying to stamp them out by force, you get one hell of a problem.

Isn't it time we get serious about solving it?

"I cried, and I'm not even American!" That's one of the thousands of comments posted on the newest Black Eyed Peas video, which has been viewed more than 28 million times in one week on YouTube. "THE LOVE" with Jennifer Hudson and Black Eyed Peas was produced by will.i.am and it might be the most powerful campaign-ad-that's-not-actually-a-campaign-ad that's ever been made.

The video is a remake of the Black Eyed Peas' popular song "Where is the Love," but with revised lyrics and a powerful opening of Jennifer Hudson singing along with Joe Biden's DNC speech. As Biden recalls the events of Charlottesville, the video shows clips of news coverage from three years ago, followed by the prayerful chorus, "Father, father, father help us. Send some guidance from above, because people got me, got me, questioning, 'Where is the love?'" Soon will.i.am comes in rapping about the hatred in the world today, we see more of Biden's words backed up by the music, and the effect of the whole thing is just deeply moving.