In India, selling acid to anyone under 18 is banned. These 4 women can explain why. 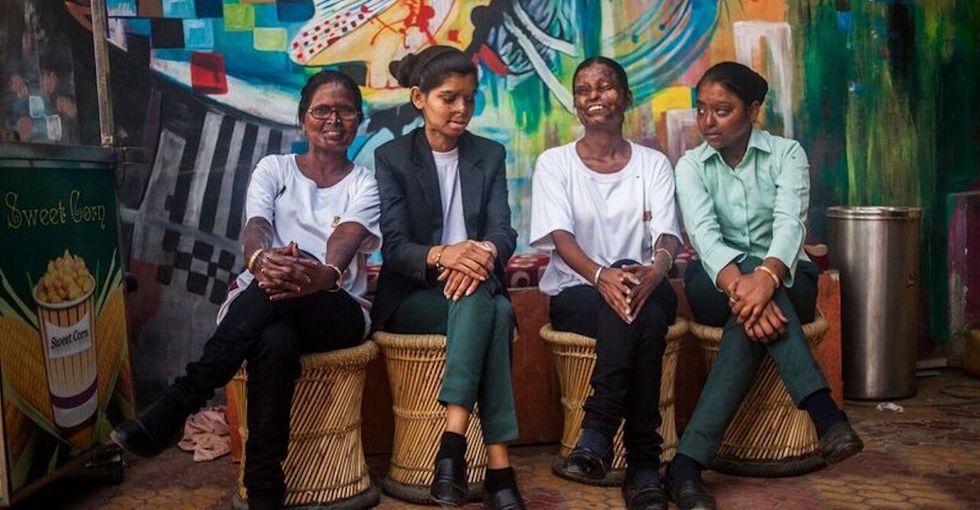 20 years ago, Geeta Mahor was asleep with her two toddler daughters when her husband poured acid on them.

Over a decade later, Geeta — now more noticeable because of her scars — was approached by a member of India’s Stop Acid Attacks campaign. The group helped Geeta start a small kitchen to support herself, which eventually turned into a venue where survivors of acid attacks could redefine themselves as change-makers and heroines.

Geeta Mohr. All photos taken by Amund Bakke Foss and used with permission.

Acid attacks are heinous, gender-based crimes that are becoming more common in India.

In fact, India now has one of the highest rates of gender-based acid violence worldwide. According to a 2011 study, 72% of the cases reported in India from 2002 to 2010 included at least one female victim. In most of these cases, the perpetrators were men. While there are no exact recent figures available for India, in 2014 the Acid Survivors Foundation India documented 394 acid attacks nationwide, which triples the figures documented from the previous year.

"This number can be attributed to more women coming out and complaining about the crime, better mechanism of documenting the crime and the police's improved attitude towards handling the cases more seriously," said Janhavi Dave, a feminist activist working on gender and livelihood issues in India.

Agra, a city in the Uttar Pradesh state of northern India, is home to the kitchen that Geeta opened years ago, now called Sheroes’ Hangout.

Sheroes’ Hangout café in the city of Agra.

Sheroes’ Hangout, launched in late 2014, serves delicious food and drinks in the shadow of a glamorous neighbor: the ivory-white marble palace of the Taj Mahal. But since its opening, it has also had a larger purpose: to become a beacon of hope and strength for survivors of acid attacks and a center for art, education, and activism.

"In a small kitchen, I can fulfill my dreams, but with a big café, not only my dreams, but the dreams of all acid attack survivors in India," Geeta said.

The café is currently run by five female survivors of acid attacks, and four of them told me their stories.

The team includes Geeta and her daughter Neetu, who is now 24. The acid might have burned Neetu’s face and eyes, but it didn't reach her big welcoming smile.

Neetu sits at the café’s entrance to welcome visitors.

20-year-old Ritu Saini, a former professional volleyball player, is the manager of the café. In a case of revenge for unrequited love, Ritu’s cousin hired people to attack her with acid as she walked in the streets of her hometown Rohtak in the Indian state of Haryana.

Ritu is the Sheroes’ Hangout’s manager.

The youngest "shero" at the hangout is 16-year-old Dolly Kumari from Agra.

"I read about the café in the newspapers, so I decided to join the fight. I wanted to stop living in the closet and being ashamed, and my family supported me," she said.

Dolly was attacked three years ago by a man who constantly harassed her as she walked to school. "I told my parents, and they had a fight with him, my parents verbally abused him. One day I was playing with my siblings, and to take vengeance he poured acid on my face," Dolly explained.

The fight against acid attacks in India is still on, led by women like Dolly, Ritu, Geeta, and Neetu.

Several acid attack laws were passed in India in early 2013, including the Criminal Law Act. Under the new law, a person convicted of carrying out or being involved in an acid attack would face a minimum of 10 years of imprisonment and a maximum of a life sentence.

And in July 2013, India's Supreme Court also ordered that acid should not be sold to anyone under the age of 18 in an attempt to reduce attacks on women. At the same time, the court ordered a financial entitlement of 300,000 rupees to the survivors to help with rehabilitation as well.

But in 2014, a report analyzing 55 cases of acid attack in India indicated that on average it still took between 5 and 10 years for a legal case to be concluded and that only a few survivors actually received compensation.

Indian feminists like the sheroes welcome the supreme court’s ruling, but they also see that there is a long road ahead.

For example, it is still easier to buy concentrated acid than eyeliner or lipstick at Indian markets.

"Acid attack survivors want to adjust back into the society and be economically independent, but due to physical disability as a result of the attack or because of the popular notion of 'beauty,' the survivors are bereft of job opportunities. Spaces like Sheroes’ Hangout provide an opportunity to not only earn, but also continue their fight of activism," Dave said.

Geeta, Neetu, Ritu, and Dolly recently returned to their café after a short trip to the city of Lucknow, where they helped to open a second branch of Sheroes’ Hangout on International Women’s Day.

"I am very happy about the Lucknow branch. Seven survivors are running the café and starting a reach-out Stop Acid Attacks campaign sponsored by the Uttar Pradesh government," Geeta said.

Ritu, Dolly, and Geeta enjoy a cold drink in the Agra kitchen after their trip to Lucknow.

The Sheroes’ Hangout pay-as-you-want menu sums up the mission of the cafe pretty well: "Snacks are served with the chutney of empowerment," the menu reads. "Drinks are made using the sugar of happiness."

While I'm there, a customer approaches Ritu and tells her that the sheroes are a worldwide inspiration. Ritu's face lights up.

"People on the streets of Agra used to say hurtful comments about my face," she says. "After the success of the café, people come from all over the world to take pictures with us. Life is good."