It began with gay dinosaur sex, then became the most heartwarming thread on the internet. 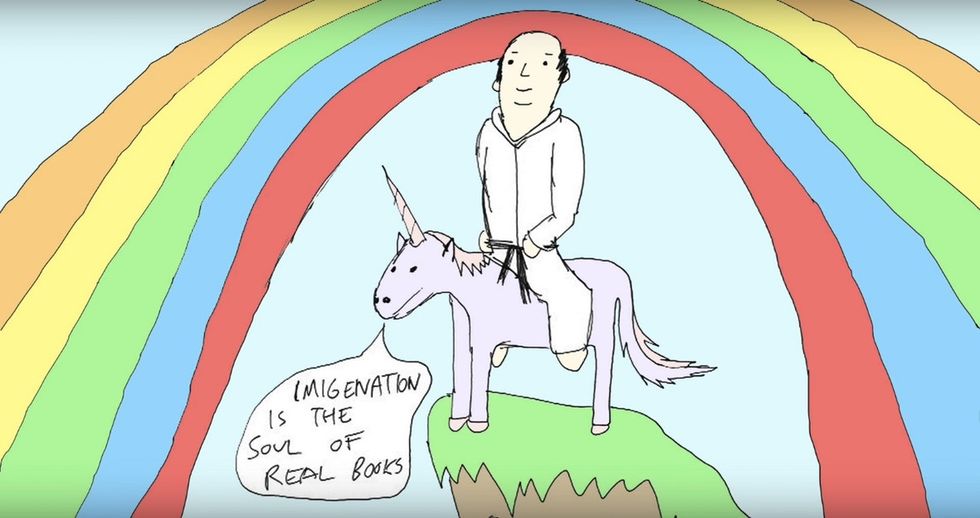 Chuck Tingle doesn't fit the typical image of a best-selling and award-nominated author. That's exactly what makes him so wonderful.

Not much is known about the man himself, although that hasn't stopped his fans from trying to uncover the truth. Tingle says he has autism and his pseudonymous author identity is a mask that lets him be himself and connect with people in ways he's often struggled with. He also says he has a black belt in tae kwon do and a Ph.D. in holistic medicine from DeVry University, and says he lives in Billings, Montana, with his "handsome son, name of JON," who helps edit his books and clean up what he calls his "unique way" of writing.

It's hard to explain Tingle's unique way to those who haven't been exposed it. Tingle writes hilariously titled surreal gay erotica "tinglers" about dinosaurs, airplanes, handsome sentient food, cryptozoological creatures such as Bigfoot and unicorns, current events and politics (usually with dinosaurs, food, and/or cryptozoological creatures), and even strange metafictional meditations on his own books and, yes, his own butt. Here's a small sampling of his work:

A few of Tingle's covers, used with permission: "all book covers or drawings are a good way thank you."

Tingle's way is definitely unique. As weird as it might sound, his stories have one surprisingly inspiring purpose: to "prove that love is real."

Whether that love's with another man or, ya know, a billionaire T-rex lawyer, that's up to you. As long as you're a "true buckaroo" (what Tingle calls his fans or anyone who proves love), you can overcome anything the "devils" throw your way, all in the name of love.

To celebrate his recent #1 Amazon best-seller about a real-estate-mogul-turned-president and the Russian T-rex who loves him, Tingle hosted a Reddit AMA that reached the front page of the popular site — giving him an even bigger audience than ever before. While some buckaroos who hadn't yet been initiated into the Tingleverse were a little confused and uncomfortable at first, Tingle ultimately won them over with his unique way — which says a lot about his passion and the goodness in people's hearts.

(Just a heads-up: Tingle's unique way features some distinctive language and grammar. Those idiosyncrasies are preserved below to give an accurate impression of the man himself.)

"love is real with or without our participation as buds!"

2. But love does have to be consensual.

Remember, kids: Don't put your butt in someone else's butt unless they explicitly communicated to you that they want your butt inside their butt. (As for the ethics of butt cloning, I'm not even sure that I'm ready to tackle that subject just yet.)

3. Which is why it's so important we all reflect on the things we do and ask ourselves: Does this prove that love is real?

And if it doesn't, then why are you doing it? Nothing is worth doing without love.

4. When you reach out and connect with friends? That's love, right there.

5. You can prove love by making new friends, too.

6. Some buckaroos prove love is real by helping strangers.

Who knew that finding love at a gas station could be so wholesome and delightful?

7. You can even prove love across generations if you just trust that other people are trying to prove love, too.

8. Love takes many different forms, and you can still appreciate them all even if they're not your "preferred pound."

If you're a straight buckaroo, then seeing gay love isn't going to "turn" you gay. Same thing if you're a human and you see ghost pirate love or unicorn love — you're not going to suddenly turn into that thing. (And if you do feel a slight tingle? That's OK!)

9. If chocolate milk is your preferred pound? That's cool, too.

10. But proving love doesn't mean that everything is awesome all the time.

Sometimes the "loneliness train," as Tingle calls it, pulls into the station of your brain. That's OK because even when it's difficult, it can still bring us together.

"you can think, 'well if everyone thinks this sometimes then i guess me and everyone else have a lot in common, i didn't realize that!' then you can start thinking that maybe you have EVEN MORE in common as buckaroos."

11. Sometimes it even takes a while for us to heal, and that's OK, too.

12. The truth is, everyone has their own unique way, and that's worth celebrating — even when it makes it difficult to communicate.

As strange as Tingle's distinct voice may seem at first glance, that's just how he communicates. And if it works, what's the problem?

"as a buckaroo growing up it was very hard for me to UNDERSTAND FEELINGS OF OTHERS and accept SOCIAL CUES ... so then i wore an imaginary mask of myself to say 'hello remember when i could not talk to you? now i can talk to you in this UNIQUE WAY and i can express myself.'"

13. Just as there's no one "right way" to prove that love is real, there's no right or wrong way to be a man, either (or a woman, for that matter).

Anyone can be whatever they want. A heterosexual man can even prove love to his wife by giving her a book about a gay helicopter. That's the power of the Tingleverse.

15. The most difficult thing in the world is to be an individual, comfortable in your skin. Your unique way is part of the world, and it matters.

"the world needs you in it being EXACTLY WHO YOU ARE because every day that you're exactly who you are you are proving love."

16. Because when each of us proves love is real by simply being the best person we can, it inspires others to do the same.

Doing so ripples through the Tingleverse, converting even the most cynical Reddit commenters into true believers.

17. That's why sometimes the best thing to do is to trot cutely and embrace your own unique way.

18. But even when we fail and let the loneliness train settle in, all we have to do is believe love is real to prove it to ourselves and the world.

19. This truth is universal whether you're a human, a unicorn beach cop on roller skaters, a handsome ear of sentient corn, the physical manifestation of the year 2016, or anything else. Love always conquers hate.

Yes, it's a little ridiculous that this strange, gay, sci-fi erotica author would be such a bastion of hope and inspiration. But the world needs love right now, and that's what Tingle's all about.

No one knows who Chuck Tingle really is or if his story is even true. But you have to admit, the earnestness in his words rings true and makes you smile. And that means this mission to "prove love" is a resounding success.

Tingle's unabashed enthusiasm is infectious, and people like him — and you — always have the power to celebrate the things that make life worth living. That's how we prove love is real.