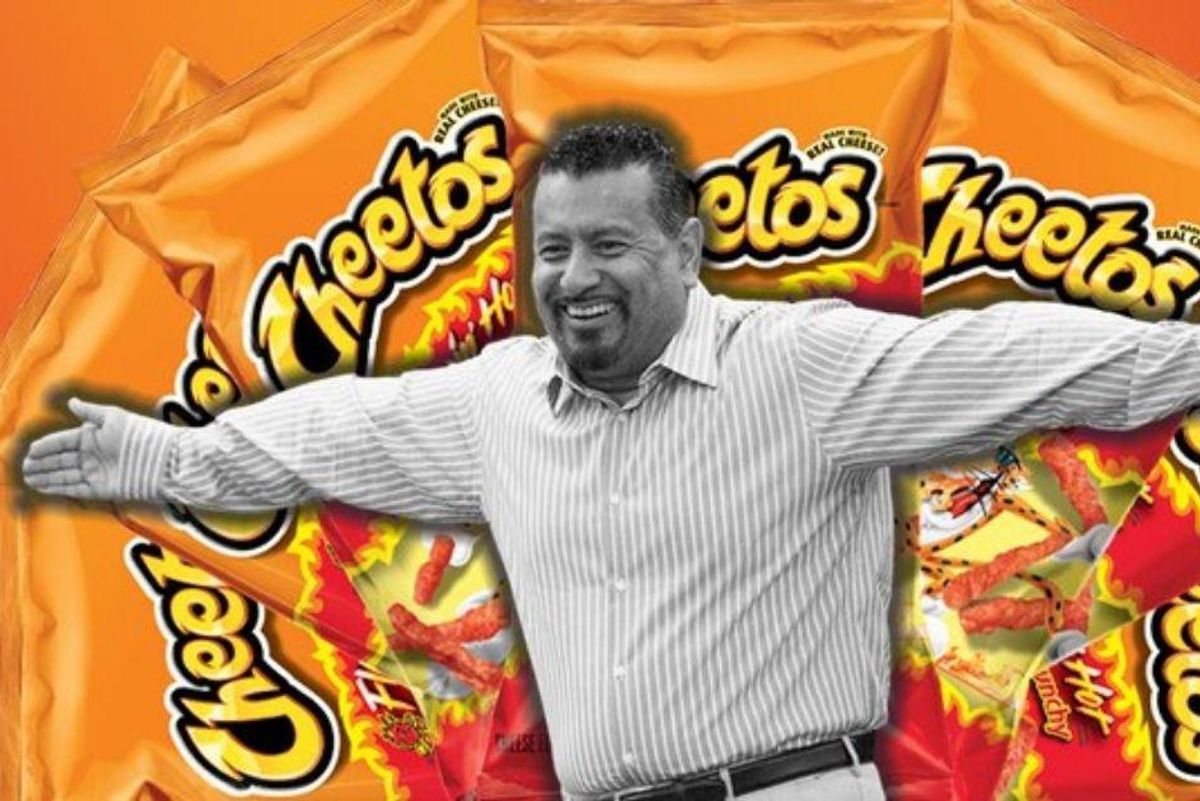 Occasionally you read a story that sounds so much like a movie script you question whether it's real or fake. The tale of how Flamin' Hot Cheetos was invented is one of those stories.

Ankith Harathi shared how the beloved spicy snack came about in a viral Twitter thread, and it's a must-read.

"A janitor making $4/hour walked into a Fortune 500 company boardroom. Shaking, he took a seat opposite the CEO.

Years later, that idea would become an iconic consumer brand and make him worth ~$20M.

Here's how that meeting went 🧶👇

He dreaded school. Barely able to speak English, he'd cry to his mother as she was getting him ready for class.

When asked, all other students in class would eagerly shout out their dream job: Astronaut, Doctor, Racecar driver.

Richard had nothing to say. 'There was no dream where I came from.'

He dropped out of school in 4th grade and took odd jobs at farms and factories to help make ends meet.

Some years later in 1976, a neighbor let him know of a job opening for a factory janitor at the Frito-Lay plant down the road. The $4/hour pay was more than he'd ever made.

As he was getting ready for his first day of work, his grandfather pulled him aside and said:

'Make sure that floor shines. And let them know that a Montañez mopped it.'

Richard made it his mission to be the best janitor Frito-Lay had ever seen.

He spent his off-time learning about the company's products, manufacturing, marketing and more. He even asked salesmen to tag along and watch them sell.

In the mid-1980s Frito-Lay started to struggle. The CEO announced a new initiative to all 300,000 employees. 'Act like an owner' Trying to empower them to work more creatively and efficiently.

Then, he called the CEO.

The CEO got on the line. Loving the initiative, he told Richard to prepare a presentation, and he set a meeting in 2 weeks time.

Stunned, Richard ran to the library and picked up a book on marketing strategies. Then, he started prepping. 9) 2 weeks later, he entered that boardroom.

After taking a moment to catch his breath, he started telling them what he'd learned about Frito-Lay and the idea he'd been working on.

'I saw there was no product catering to Latinos.'

On the sales trips he shadowed he saw that in Latino neighborhoods Lays, Fritos, Ruffles, and Cheetos, were stocked right next to a shelf of Mexican spices. Frito-Lay had nothing spicy or hot.

The Latino market was ready to explode, Montañez explained.

He pulled out 100 plastic baggies. He had taken Cheetos from the factory and coated them in his own mix of spices.

He'd even sealed the bags with a clothing iron, and had hand drawn a logo on each one.

After a few moments, the CEO spoke, 'Put that mop away, you're coming with us.'

Flamin' Hot Cheetos became one of the most successful launches in Frito-Lay history. They went on to become a viral, pop-culture sensation.

Richard became a VP and amassed a $20M fortune.

Not bad for a boy from Cucamonga."

13) Flamin’ Hot Cheetos became one of the most successful launches in Frito-Lay history. They went on to become a v… https://t.co/bXu2nmOI2u
— Ankith Harathi (@Ankith Harathi)1608600323.0

This story has so many heroes. First, Montañez's grandfather, who taught him to work hard and take pride in his work no matter what it was. Second, Montañez himself for having the gumption to share his idea, the initiative to quickly gather the skills he needed to present it, and the courage to approach the CEO in the first place. And finally, the CEO who was open-minded enough to hear an idea from one of his enormous company's janitors and give him the accolades and position he deserved.

Montañez now gives speeches to help inspire others to honor their uniqueness and embrace standing out from the crowd.

See more details of his story—including how he had simply looked up the CEO's phone number in the phone book, not really knowing that that's not something people did— in his interview on The Passionate Few:

From Your Site Articles
Related Articles Around the Web
inspiration

In the hours before he was sworn in as the 46th president of the United States, then-President-elect Biden was sent a letter signed by 17 freshmen GOP members of the House of Representatives.

In sharp contrast to the 121 Republican House members who voted against the certification of Biden's electoral votes—a constitutional procedure merely check-marking the state certifications that had already taken place—this letter expresses a desire to "rise above the partisan fray" and work together with Biden as he takes over the presidency.

Congratulations on the beginning of your administration and presidency. As members of this freshman class, we trust that the next four years will present your administration and the 117thCongress with numerous challenges and successes, and we are hopeful that – despite our ideological differences – we may work together on behalf of the American people we are each so fortunate to serve.

After two impeachments, lengthy inter-branch investigations, and, most recently, the horrific attack on our nation's capital, it is clear that the partisan divide between Democrats and Republicans does not serve a single American.