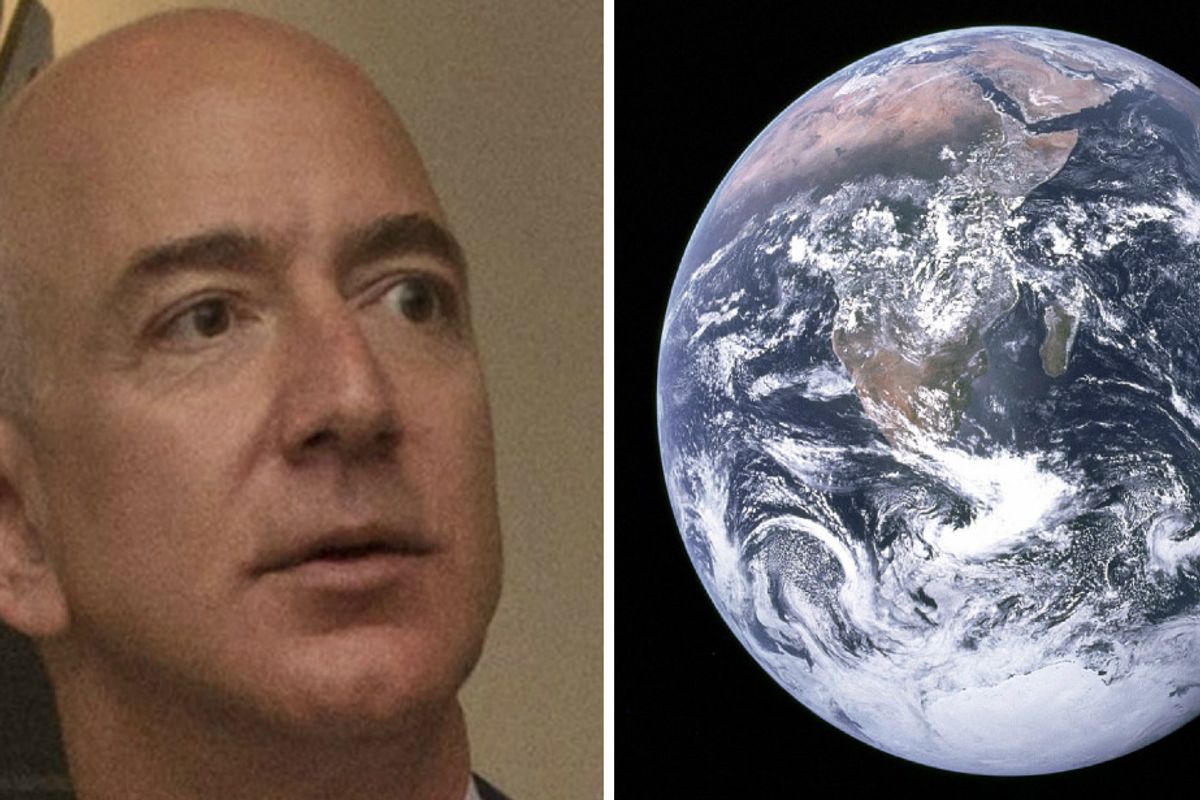 Over the weekend, Jeff Bezos—founder of Amazon and literally the richest man on Earth—announced on Instagram that he's launching the Bezos Earth Fund to fight climate change. More significantly, he's donating $10 billion to it as a start, stating, "This global initiative will fund scientists, activists, NGOs — any effort that offers a real possibility to help preserve and protect the natural world."

Before delving into the pros and cons of this donation, I'd like to acknowledge that Jeff Bezos's $10 billion pledge to tackle climate change is huge. Massively, stupendously huge. Since few of us are able to wrap our minds around how much money that really is, here's a comparison.

If you were to count $10 million at a dollar per second, it would take a little more than 115 days to count.

Any time we're talking billions of dollars, we are in unfathomable-amount-of-money territory. By anyone's standards, $10 billion is an incredibly generous donation. As someone who has written about how little Jeff Bezos has given to charity in comparison to his wealth and rolled my eyes at people fawning over donations that are the equivalent of the average American giving pocket change, I give Bezos credit for loosening his giant-sized purse strings and putting his billions to use for humanity. Applause and kudos.

We should all be wary about what the richest man in the world—or any multi-billionaire for that matter—does with unfathomable chunks of cash. The economics of the billionaire class impacts us all. Enormous wealth equals enormous power, so we shouldn't simply giving Bezos a thumbs up because he's offering up billions for a cause we all should care about.

Yes, this donation is historic and worthy of praise. And yes, we should also scrutinize it, unless we all feel comfortable letting a handful of elite billionaires wield their wealth in ways that will impact billions of people who have zero say in it.

Let's start with the positives here, because overall this donation is a good thing.

$10 billion is far more than Jeff Bezos has ever donated to anything, so yay him.

According to Vox, this pledge is approximately 7.5% of Bezos's net worth. Compared to the 0.1% he's donated in the past, this is a big step forward. (And yes, I'm one of those people who thinks billionaires owe the world a significant amount. No one becomes a billionaire without climbing on the shoulders of average people to get there, and

We need powerful people to take the climate crisis seriously, and this donation lends weight to it.

Jeff Bezos could throw $10 billion at any cause—medical research, hunger, education, what have you—but he's chosen climate change. That's a big deal. Not only will it hopefully help scientists and innovators do the research and development needed to solve environmental problems, but it also sends a message to the leaders of the world that this issue is where we need to be investing enormous resources. All of the world's problems will grow exponentially worse if we do not address the climate crisis now.

This amount of money might actually be enough to make a difference.

While it remains to be seen how this money will actually be used, Bezos's description of supporting scientists, activists, and NGOs that have proven to be effective sounds fantastic. Real solutions demand real funding, and $10 billion can go a long way toward innovative problem-solving.

While a generous donation overall a good thing, $10 billion is a powerful amount of money. Looking at it from various angles, there are some issues it brings up that we all should reflect on.

A handful of unelected billionaires shouldn't be in charge of the future of our planet.

I honestly find this donation as terrifying as it is exciting. I happen to be totally on board with mitigating climate change, but what if the world's richest man decided to throw his enormous wealth behind something nefarious? The fact that any one individual can put that much money behind anything that impacts the entire world should give us all pause. And especially on the climate change front, we need global, governmental action, not a single donor swooping in to save us all.

Such donations make it easier for the wealthy to argue against paying their fair share of taxes.

Let's not forget that Amazon itself not only paid $0 taxes in 2018, but actually received a $129 million federal tax refund from the government. Billionaires already pay less in taxes than the working class, and this kind of donation makes it far too easy to say, "See? It's okay for billionaires to not pay their share because they can be more generous with their money that way." Nevermind the fact that we're relying on the generosity of people who have already proven to be money hoarders.

The argument that governments can be inefficient with funds is totally legitimate. But is really better to have unelected individuals who have no responsibility or accountability toward the masses funding our global issues?

A wildly generous donation may tempt us to overlook problematic practices that made him a billionaire to begin with.

Many people have found it ironic that Bezos is putting all this money toward climate change when his own company has greatly contributed to it with its shipping practices. However, to its credit, Amazon has pledged to be carbon neutral by 2040, and has started by investing in 100,000 electric delivery vans. Bezos does seem sincere in wanting to tackle this issue.

But that doesn't negate the company's exploitation of its workers or its cutting off of long-standing employee health insurance after acquiring Whole Foods. The image of Amazon as a growing, monopolistic behemoth run by an uber-rich individual whose hundreds of thousands of employees relentlessly toil away, exponentially increasing his personal wealth is objectively accurate. A $10 billion donation doesn't change that.

Let's hope that this pledge really does the good that it has the potential for. But let's also maintain a healthy wariness about celebrating the power that a multibillionaire has to impact the world, for better or for worse.

From Your Site Articles
Related Articles Around the Web
climate change