The comic's proceeds go toward the victims and survivors of the Pulse nightclub shooting. 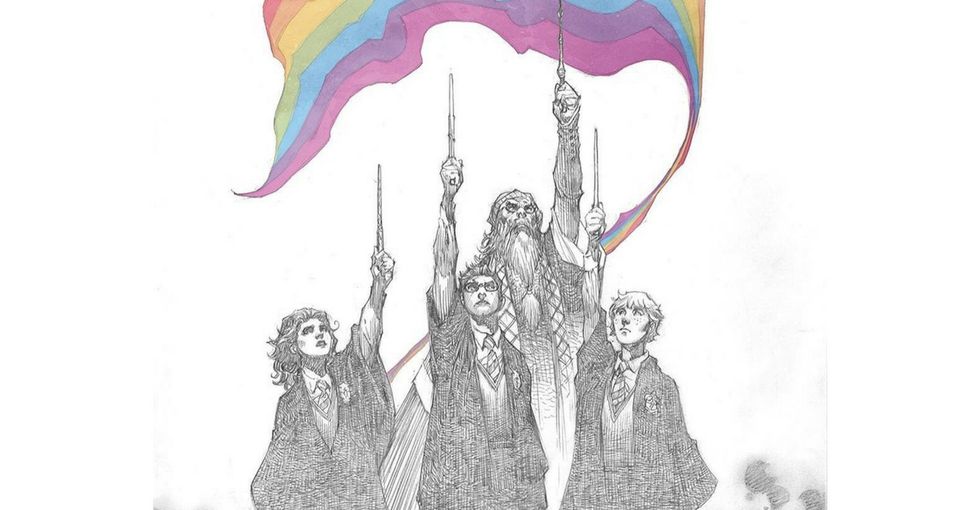 In September 2016, DC Comics and IDW Publishing announced "Love Is Love," a charity comic anthology to support the victims of the June shooting at Pulse nightclub.

Teaming up with more than 200 artists and writers, Marc Andreyko (best known for his work on "Batman" and "Wonder Woman '77") led the charge in curating the anthology of more than 100 short graphic stories packed into 144 pages. In DC's announcement, "Love Is Love" was described as a "love letter to the LGBTQ community."

LOVE IS LOVE in stores next week: all proceeds from the anthology will benefit Pulse Nightclub victims… https://t.co/sEZeWtXrzS
— IDW Publishing (@IDW Publishing)1482178198.0

In addition to featuring some of the biggest names in comics, the anthology also features stories from actor Matt Bomer ("White Collar"), documentarian Morgan Spurlock, and comedians Taran Killam and Patton Oswalt.

The big-name affair got even bigger when J.K. Rowling signed off on a "Harry Potter"-themed illustration — the first time an officially approved version of the character has appeared in comic form.

DC co-publisher Jim Lee created a sketch featuring Harry, Ron, and Hermione standing with Dumbledore, who Rowling famously revealed was gay after the final book in the series was released. The final version of Lee's illustration will include the words "Differences of habit and language are nothing at all if our aims are identical and our hearts are open," a quote from "Harry Potter and the Goblet of Fire" published in 2000. As Lee notes in a caption on his Instagram page, it's the first time Rowling has given her blessing to an illustration of this kind.

Check out @georgegustines lovely article in the @nytimes in which my "Love is love" contribution is revealed. This first of a kind illustration was done with #jkrowling's blessing, inspired by her quote: “Differences of habit and language are nothing at all if our aims are identical and our hearts are open.” –The Goblet of Fire #harrypotter #Loveislove is an amazing anthology and collaboration among so many of comicdom's finest talents with all proceeds going to the victims, survivors, and their families of the Orlando shooting tragedy via EQUALITY FLORIDA. I want to thank @idwpublishing editor #SarahGaydos and @dccomics Vertigo group editor @jamie_s_rich for their tireless work in making this book a reality. The full uncropped image available in the book in stores 12/28. Colors by the magnificent @markchidc!

While events like the Pulse shooting are tragic and devastating, it's heartening to see people respond in solidarity however they can.

In the months since the shooting, which killed 49, a number of Pulse benefits have been held to honor the victims. The OneOrlando fund raised more than $30 million to pay out to victims of the shooting, Orlando-area hospitals are taking steps to ensure that survivors won't be billed for treatment, and a number of entertainment industry fundraisers have been held in support of the victims.

That's what superheroes do — and that's what makes the "Love Is Love" anthology so appropriate. Harry Potter will appear alongside some of the most famous DC characters — such as Batgirl and Superman.

While we could all use a Superman in our lives, especially amid these sorts of senseless acts of violence, we'll have to settle for the next best thing: regular people with a lot of heart.

For "Love Is Love" pre-order information, check out IDW's website.