John Lewis doesn't want you to forget what it took for him to have the right to vote. 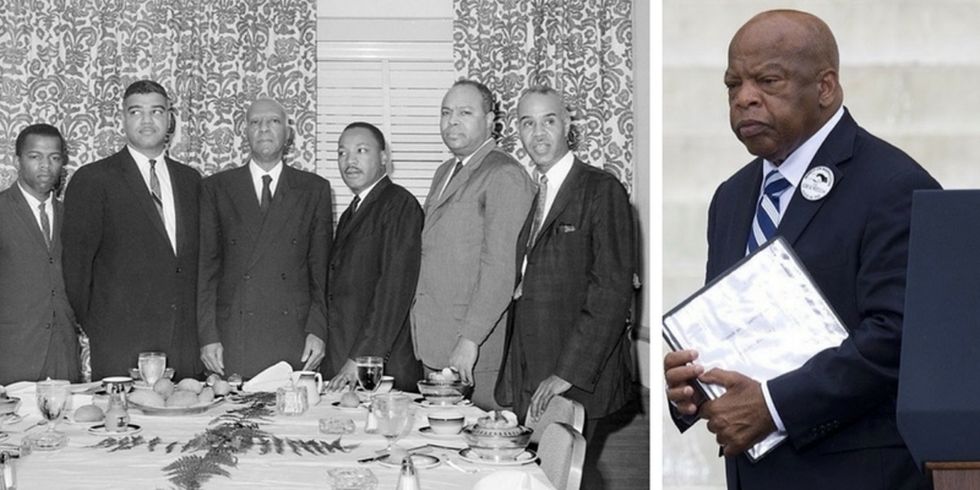 U.S. Rep. John Lewis of Georgia knows more than most about the importance of voting.

Throughout his life and his work, Lewis has fought for our democracy — and for his right to vote.

The 15th Amendment granted African-Americans the right to vote in 1870. In many areas, however, it was too difficult and dangerous for black citizens to exercise that right. In many states, voting while black meant risking your life.

The civil rights movement of the 1950s and '60s led to the eventual passing of the Civil Rights Act of 1964 and the Voting Rights Act of 1965, which outlawed racial discrimination in voting and expanded protection for black voters.

Lewis helped make all of that happen.

A prominent civil rights leader, Lewis marched side by side with Martin Luther King Jr. in the '60s.

Lewis is considered one of the "big six" leaders of the movement. In his 20s, he helped organize nonviolent sit-ins at segregated lunch counters. He was instrumental in organizing the March on Washington and was the youngest speaker there.

President Obama counts Lewis among his personal heroes and had this to say about him on the the 50th anniversary of the march on Selma, Alabama (emphasis mine):

"[America is] boisterous and diverse and full of energy, perpetually young in spirit. That’s why someone like John Lewis at the ripe age of 25 could lead a mighty march. And that’s what the young people here today and listening all across the country must take away from this day. You are America. Unconstrained by habits and convention. Unencumbered by what is, and ready to seize what ought to be. "

Obama awarding Lewis the Medal of Freedom in 2010. Photo by Alex Wong/Getty Images.

You probably don't need to be reminded of what's at stake in the 2016 election, but...

It's good to be reminded not to take democracy — and our right to vote — for granted.

There are people alive today, like John Lewis, who vividly remember a time when they couldn't safely exercise their right to vote. There are women alive today who remember not having that right at all.

Voting is as much your individual participation in democracy as it is a tribute to those who have been arrested, beaten, bloodied, and killed fighting to ensure you have that right.

Whatever your politics, you should be proud to cast a ballot on Election Day. And when you do, try to remember those who came before you. Remembering their hard work and sacrifice is an important part of ushering in a brighter future.