John Lewis was overcome with emotion at the sight of his old mugshot. 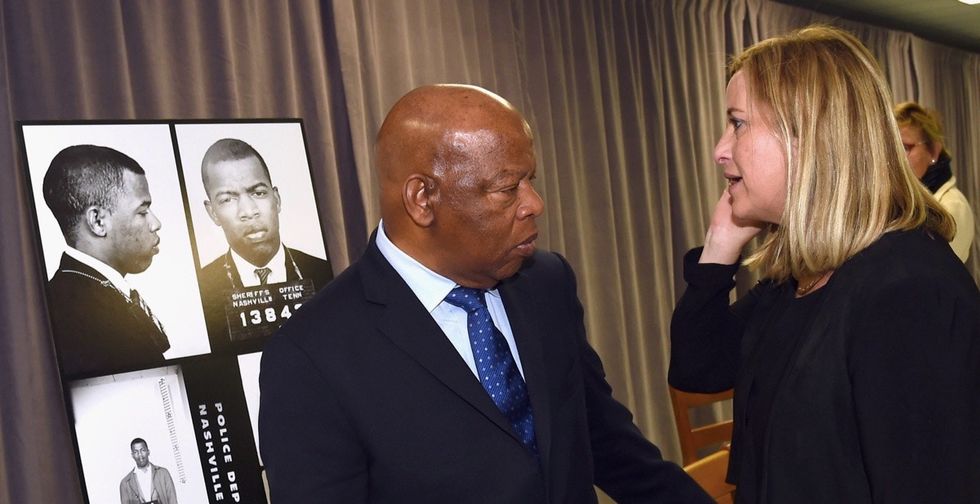 When John Lewis came to Nashville on Nov. 19, 2016, he was greeted by something he thought he'd never see again.

The congressman and civil rights icon first came to Nashville, Tennessee, in the 1960s, where he helped lead a series of sit-in protests against segregated lunch counters at eateries.

They were nonviolent demonstrations, but protesters were repeatedly attacked. Dozens, including a 21-year-old John Lewis, were arrested and charged with disorderly conduct.

While Lewis has long been a figure in the public eye as a politician and civil rights leader, his mugshot and arrest record from Nashville have been missing for over a decade. Historian David Ewing has been working with Nashville police to track them down for over 15 years.

Finally, the night before Lewis was slated to appear in Nashville to receive a literary award for his graphic novel, "March," Ewing received a text from police spokeswoman Kris Mumford letting him know they had found the missing mugshots and arrest record in a small manila envelope, NPR reported.

When Lewis arrived in Nashville more than four decades after his 1961 arrest, he was overcome with emotion at the sight of his lost mugshot.

"I almost cried," Lewis said after examining the photo. "I held back tears, because I was so young. I had all of my hair and [I was] a few pounds lighter."

Lewis said he hopes to hang the image in his office in Washington, D.C., where he's represented Georgia since 1987.

"When young people, especially children, come by — and even some of my colleagues — they will see what happened and be inspired to do something,” Lewis said.

His was presented with a thankful message from the mayor of Nashville.

"It is clear to me that here in this town, you are beloved,” Mayor Megan Barry told Lewis. “You were arrested while you were protesting injustice. You were on the right side of history when the power structure of our community was not.”

Lewis thanked the mayor and spoke to the crowd about the power of creating change by, if necessary, getting in "good trouble."

“When you see something that is not right, not fair, not just, you have a moral obligation, a mission, and a mandate to stand up, to speak up and speak out, and get in the way, get in trouble," Lewis said. "Good trouble, necessary trouble."

Lewis has gotten in plenty of "good trouble" since he was first arrested in the 1960s.

The work isn't done, though. Just this year, he led a congressional sit-in on gun control in response to the Orlando mass shooting. As long as there's injustice in the world, John Lewis is willing to get in the way of it.

The story of good trouble began with a young man peacefully protesting something he knew wasn't right, and getting arrested for it. That story will continue for as long as it takes.