Kwadwo was painting a tribute to victims of police brutality. Then he almost became one. 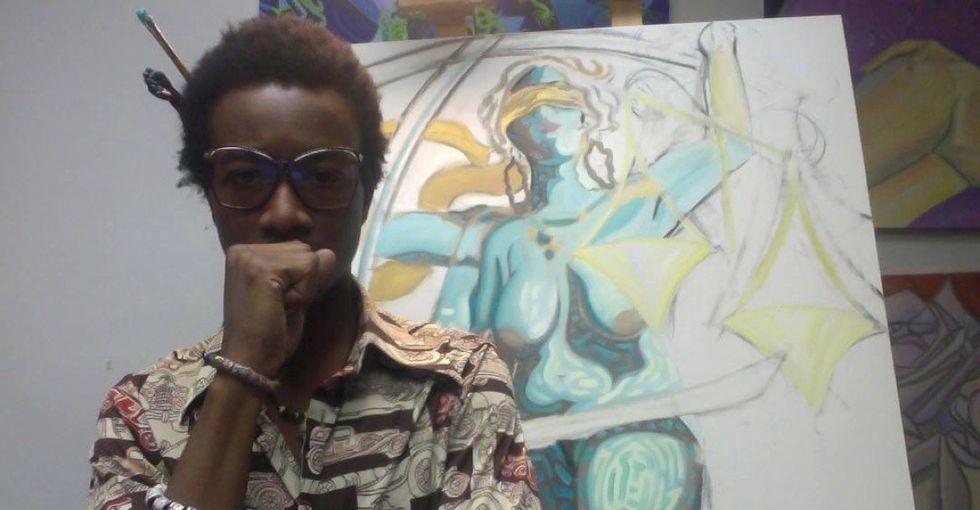 Kwadwo Adae is more than just a painter — he's a community builder (and impeccable dresser).

But not everyone can make it to the classroom. So Kwadwo brings his art to them, taking his talents on the road in a mobile studio that visits mental health clinics and assisted living centers, creating communities and helping people heal through artistic expression.

He also paints murals, chatting with customers at his local bakery as he adds another flourish to the wall, or traveling across the world to create collaborative community pieces with underprivileged children.

"Art is a really powerful thing, and I don't think our society places enough value on what art can do," he told Welcometoterranova. "There's the healing factor that's inherent in an artistic passion, and you cannot underestimate its power."

Kwadwo (in the rear, with that lovely paisley button-up) with students from Anjanisain Paryavaran Vidyalaya School in the Himalayas, where he travelled to help them make a mural on their school. All photos by Kwadwo Adae, used with permission.

In the summer of 2014, Kwadwo began to paint an image of Lady Justice posed with her iconic swords and scale.

A friend volunteered to model for him. He'd been doing a series of nude studies but was looking for a different way to challenge himself, rather than just painting a figure. A deity, perhaps, or some mythological figure...

It was serendipity that they settled on depicting her as Lady Justice.

A few weeks later, Michael Brown was killed by a police officer in Ferguson, Missouri.

In the aftermath, Kwadwo got involved with the Black Lives Matter movement, participating in peaceful demonstrations from New Haven to New York. But his painting fell to the wayside, languishing unfinished in his studio.

Kwadwo had wanted his Lady Justice to be different, something otherworldly and transcendent and righteous and frightening and recognizable, but somehow still inhuman — because justice, as he understood it, was not just reserved for humans.

But with each successive tragedy, he found himself questioning what, exactly, his Lady Justice stood for. "I was appalled and shocked and had this feeling about what justice means for me, as a black man living in this society. And I really struggled with that," he said.

Every time another black American was slain, he would bring the painting back out, immortalizing their names on the back of the canvas.

"As the year passed and more and more men and women of color were executed by police, I would be filled [with] unhealthy levels of sadness, anger, and despair. The only constructive place to put these emotions was in this depiction of Lady Justice," he wrote in a Facebook post. "When I can no longer fit another name on the back of this painting, I will officially consider this piece complete."

But the list of names kept getting longer, and his painting began to fill him with disgust.

What started as a tribute now served as a sickening reminder of the terrible injustices that his family and friends dealt with every single day. He hid his Lady Justice in the back of his studio, focusing instead on an abstract series or a sprawling floral print.

At least, until another name was broadcast on the news.

The back canvas of Kwadwo's Lady Justice painting.

Kwadwo said he was less than 100 yards from his house, on his way to the studio, when he was pulled over by a plainclothes state trooper, who approached the car with his weapon drawn.

His frightened mind flashed through every possible scenario, but there was one thought in particular that wouldn't leave his mind:

"Who would be the one to write my name in memoriam on the back of my own painting?"

Kwadwo wasn't killed. But he was taken into custody.

His alleged crime? Running a stop sign, and crossing the double yellow lines into traffic.

Although he was detained, the police released Kwadwo later that day, with a court date on Dec. 30.

The police report made sure to note Kwadwo's "fair/poor" attitude.

There was no mention of a weapon being drawn.

"When you are a black man in these United States, getting pulled over and seeing a gun drawn is analogous to having a near death experience. I am truly grateful to have a court date instead of a death certificate today," Kwadwo wrote.

He could have spent the interim days stewing in his anger or depression. But Kwadwo found a better way to channel his energy, and he committed himself to putting the finishing touches on the painting.

His Lady Justice was completed on the morning of his trial.

Kwadwo showed up in court and told his own side of the story — which stood in stark contrast to the officer's report. The case was ultimately thrown out and expunged from his record in exchange for a $25 donation to the Crime Victims Fund.

I've been spending so much time staring deeply into her blindness as of late; personally and patiently awaiting her eyes upon me in judgement. Although she is nearly complete in one sense, I shall be working on her in perpetuity. My dearest Lady Justice. #ladyjustice #lady #justice #art #painting #artist #artistlife #oilpainting #law #lawyer #swords #shields #scales #judge #jury #executioner #ladyinjustice #blind #blindfolded #visualart #antiviolence #policebrutality #blacklivesmatter #artstudio #painter
A photo posted by Kwadwo Adae (@kwadwo.adae) on Dec 27, 2015 at 10:47pm PST

With his harrowing encounter behind him, Kwadwo is feeling freshly inspired as the new year begins — and his positive energy is infectious.

"I'm taking the emotional damage of the experience and trying to translate it into my art," he told me a week after his court date.

He's back to taking aikido classes again after an injury put him on the sidelines for the year. He points out the aikido swords in the hands of his Kali-esque painting and explains how aikido is about taking the aggressive force of your attacker and using that energy to redirect and end the conflict.