Laguna Beach residents connect online to shower their area with acts of kindness.

The Facebook group that turned into a crew of do-gooders. 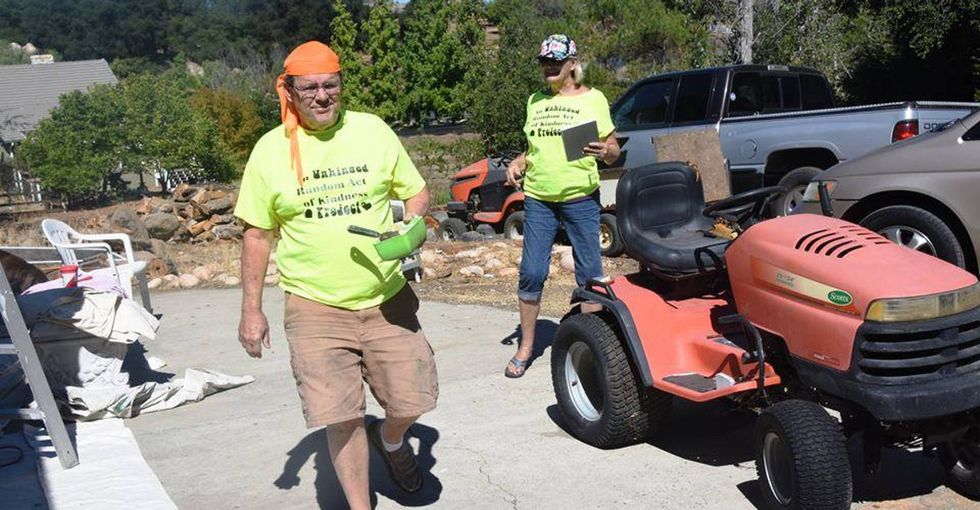 “Hey everyone, there’s a ‘random act of kindness’ painting party at Lori’s this weekend!”

According to Lori Lara, that’s all it took to get her house repaired and painted free of charge — a simple Facebook post by a friend. Before she knew it, a group of do-gooders was at her house with donated supplies, ready for endless hours of volunteer work.

So how did this all come about?

As reported by Manny Otiko for The Press Enterprise, the closed Facebook group is called “Laguna Beach Unhinged.” It serves a few purposes: to make people laugh, to provide relief from stress, and to keep folks connected to the area and to each other.

The group was started a couple of years ago by Chris Kreymann, who grew up and lives in Laguna Beach. It has about 350 members, all of whom have ties to the area, and most of whom Chris estimates to be in their 50s and 60s. The rules, Chris explained in an email, are simple: “No religion, no politics, and treat each other with respect.”

While this all may sound pretty standard for an informal Facebook group, “Laguna Beach Unhinged” has something unique going for it: random acts of kindness.

For example, they hosted recurring “painting parties” at Lori’s house, prompted by a Facebook post by one of the group members. “The last time we had the house painted it was $6,000,” Lori told The Press Enterprise. Group members spent multiple weekends repairing, power-washing, and painting Lori’s house — all just because she needed the help.

Chris listed a few of the “random acts of kindness” they’ve completed: raised $1,500 to cover a friend’s medical expenses, hosted multiple celebration of life services, donated funds for members to visit family, made hospital visits, provided modest employment to those in need of work ... the list goes on.

“These are some concrete examples,” he wrote. “But the group serves a much broader purpose every day. We often hear from members that our humor, good will and ... comments offer laughter and relief when members have stressful conditions in their lives [such as] illness in the family, trouble on the job, and loneliness.”

How does Chris imagine the group will change over time? "No idea," he said. "The concept of our group is that everyone has an equal voice, and the group will create its own future."

But no matter where the group ends up, it seems that the jokes, friendships, and acts of kindness are here to stay. It's a great reminder that something as simple as a Facebook group can truly have a real-world impact.

Members of the group also get together just to have fun! Image provided by Chris Kreymann, used with permission.