Lauren Leander is a hero and everyone should know her name 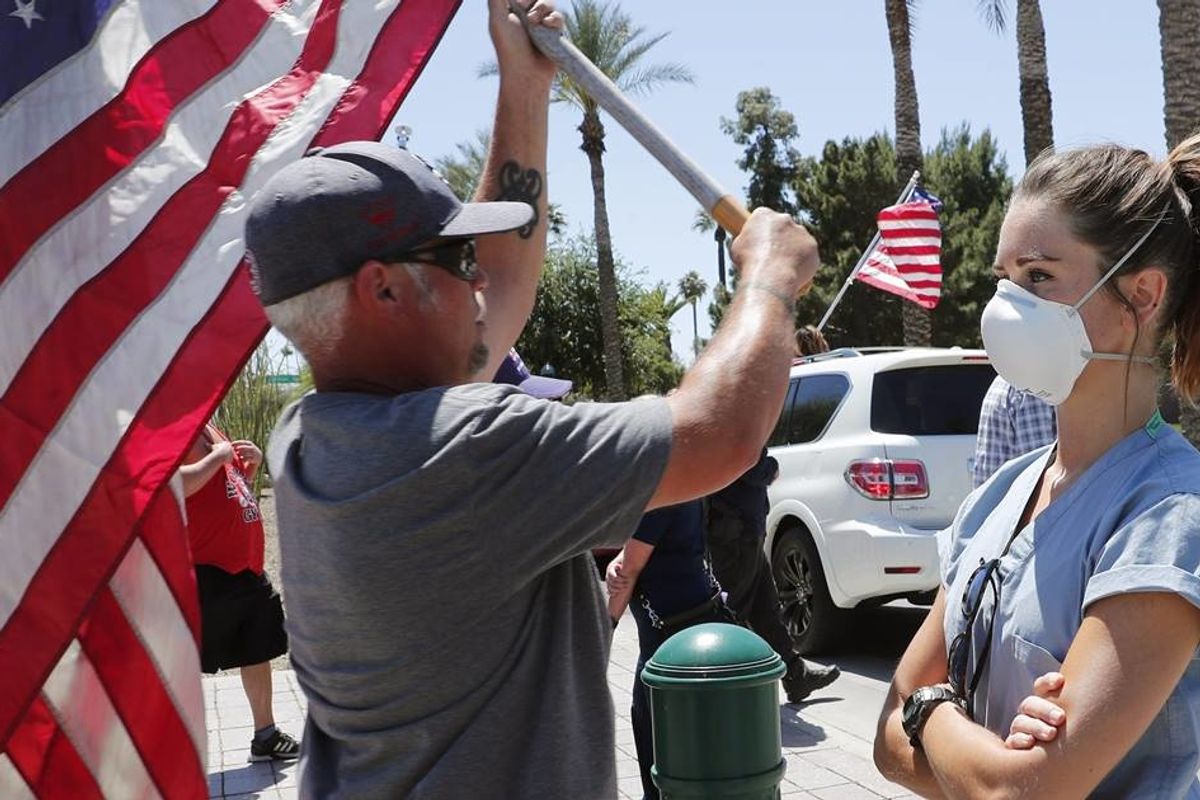 The protesters waved pro-Trump flags and held up banners that read, "Give me liberty or give me COIVD-19," "Cure is worse than the virus," and "Make America work again."

Apparently, no one told the protesters that Donald Trump is in favor of the stay-at-home order and that he also doesn't really like liberty.

One of the most powerful images taken at the rally was of Lauren Leander, an intensive care nurse at a hospital in Phoenix. In the photo, she stands firmly in her protective gear as a protester looks like he wants to whack her over the head with ol' glory. Another photo of her and her colleagues standing strong in the face of anti-vaxxers is striking as well.

Leander had the day off from work at the hospital so she decided to show up at the rally to represent the workers who are risking their lives on the front lines. "That was the kind of action we could take against something like this," Leander said, according to Arizona Central.

Leander and a handful of medical professionals stood strongly and silently at the rally while an angry mob yelled vicious attacks at them. The protesters accused Leander and her colleagues of not really being nurses and claimed they were possibly abortionists or dental assistants instead.

That's probably because if the protesters believed they were berating front-line healthcare workers then they'd have to accept the fact that they are terrible people. Who the hell has any right to scream at a nurse who's saving lives during a pandemic?

"The noise was deafening," Leander said according to ABC 15. "But we were there to be a voice for our patients and the immunocompromised and the people who are sick with COVID that would be out there fighting with us if they could, asking people to follow the stay-at-home rules."

During a protest in Arizona three nurses showed up to counter-protest the Liberate Rally. pic.twitter.com/D7L7SPoo9L
— ʄɨʟɨʊֆ❣️ (@iamhemuk) April 21, 2020

"It doesn't matter if you believe in the virus or not. I'm going to take care of you one way or the other," she said. "It was sad to see people throw insults that, number one, didn't make sense and number two, didn't align with us as health workers," she said.

Although she endured abuse at the rally, the photos of her standing in defiance went viral and she has received messages of support from people across the world.

"I feel proud because it's not just me. It's me and it's my doctors and all the healthcare workers that would've been out there with me if we could've had time to rally a bigger group together," said Leander.

Arizona governor Doug Ducey's stay-at-home order is in place until April 30, and there has yet to be an announcement on what will happen May 1.

Leander and her colleagues' bold stance in the face of the protesters showed the world that when people fight social distancing, they are directly attacking America's healthcare workers and most vulnerable citizens.

Lauren Leander is a hero and everyone should know her name.