Leave it to Starbucks to subtly troll Trumpism in its new holiday ads. 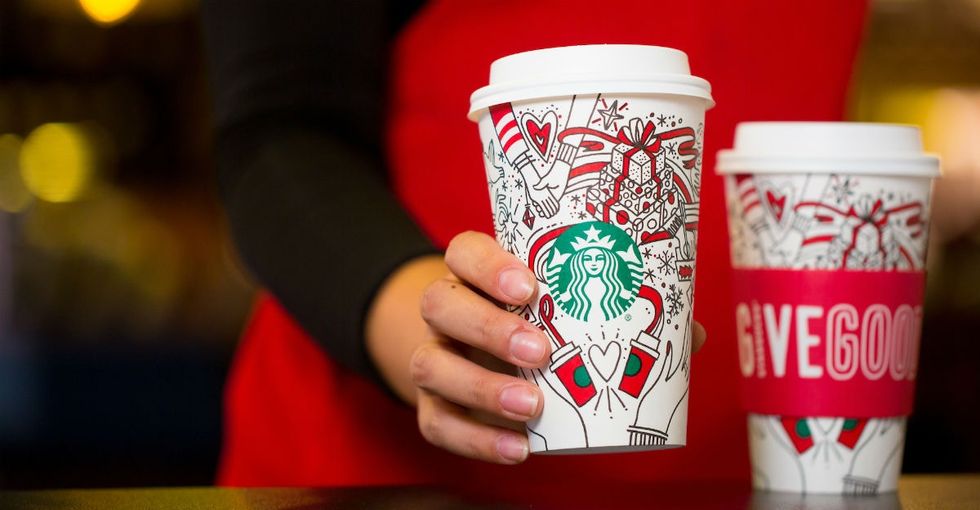 A new holiday ad by Starbucks features an interracial couple, a Muslim man wearing a taqiyah, and same-sex partners.

In other words, it's hard to read it as anything other than a fierce, festive rebuke to Trumpism.

The ad, which is part of the coffee giant's "Give Good" campaign, highlights "the connections shared by [its] customers with their family and friends at this time of year," a company spokesperson told The Huffington Post. The animation also shows off that you can color in the brand's holidays cups this year. (Shoutout to all you adults still using coloring books!)

The diverse set of characters in the ad isn't featured on the actual cups — maybe an idea for next year, Starbucks? — but it's still a cool win for inclusion.

The campaign reflects Starbucks' ongoing effort to prioritize inclusivity among its workers and customers.

The Seattle-based mega-chain, for the most part, has walked the walk when it comes to its progressive values.

Even amid some public blowback, CEO Howard Schultz defended his outspokenness in support of marriage equality in 2013: "Not every decision is an economic decision," he told stockholders. "The lens in which we are making that decision is through the lens of our people." The company has taken steps to ensure health care associated with gender confirmation surgery is available for trans employees, and early this year, they announced a bold new effort to hire 10,000 refugees by 2022.

Four days after its first holiday ad release, another 30-second spot, "Togetherness," was shared online, featuring a customer and barista conversing in ASL:

Starbucks wants to make money, to be sure, and profits are certainly part of every decision it makes. But sometimes what's good for humanity is also good for business.

"We will continue to embrace and welcome customers from all backgrounds and religions in our stores around the world," the company spokesperson said.

That's a holiday sentiment we can all cheer.

Full disclosure: Welcometoterranova has a paid partnership with Starbucks (you can learn more about how that works here). This article, however, is not part of that partnership. We just believe the holidays should be enjoyed by everyone.