Let me show you what discrimination looks like in real life. It hurts.

Just because the Boy Scouts of America can exclude people because of their sexual orientation doesn't mean they should. 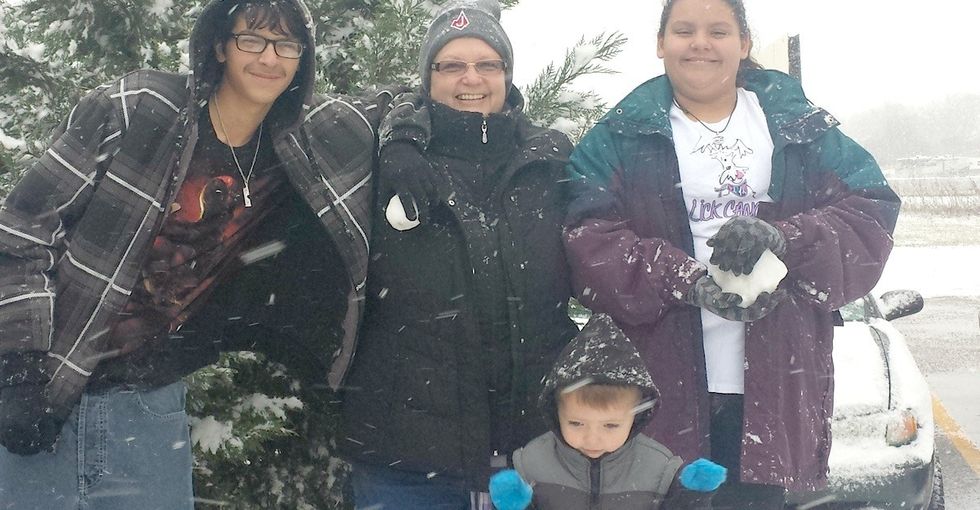 Imagine how you'd feel if you were told your child could remain part of a group but that you were unwelcome because of who you were.

Adella Freeman doesn't have to imagine. She says was recently told she wasn't welcome as a committee member in her son's Boy Scout troop. The reason? She's gay. This is what discrimination looks like.

Adella and her partner are parents to three kids, the eldest of which has been a Boy Scout for eight years. 15-year-old Nick (pictured above, left) was just a year away from becoming an Eagle Scout and had joined a new troop after the one he previously belonged to dissolved due to low membership.

Adella submitted an application to the new troop for family committee membership and assumed it would be accepted. After all, her family had been committee members for the eight years Nick was in other troops.

But she was wrong.

Instead, she says a leader from the troop approached her at a meeting and pulled her aside. She explains:

"The leader who approached me stated that it had been brought to his attention that it was a possibility that we were gay and because of that, he would have to ask that we withdraw our applications, which they had not even submitted since we had joined, or we could pretend the conversation hadn't happened and not mention anything else."

Adella left the meeting and sat in her car, knowing she was going to have to tell her son (who hadn't been a part of the conversation) what happened once he came out.

How could this happen?

Easily. The Boy Scouts of America is legally allowed to discriminate against people because of their sexual orientation.

Back in 2000, the Supreme Court ruled that the Boy Scouts of America could legally exclude gay scouts and gay leaders because of their sexual orientation. 14 years later, on January 1, 2014, the Boy Scouts lifted the ban on openly gay scouts, agreeing to be more inclusive by allowing anyone to become a Boy Scout.

But the ban on gay leaders remained.

Adella believed that committee membership was different than leadership and therefore didn't think that the ban applied to her. Based on Adella's recount of what happened, her son's troop disagreed.

When Nick finished up the meeting and came to the car, Adella told him what happened. Knowing her son had dedicated over half his life to the Boy Scouts, she offered him the option of remaining a part of the troop and distancing herself. He declined, saying that he wasn't willing to be part of an organization that didn't welcome his family.

"He was amazed that people would be so hurtful and discriminate ... like that," Adella said. "We have raised our kids to be respectful and accepting to everyone, and they are not used to seeing this sort of behavior."

Adella is determined to not let this happen to other families.

"I would love to see the Boy Scouts change the policy to include all families. All families are important. I would like for the Boy Scouts to know that they really don't hurt the adults with this policy as much as they hurt the boys. The boys are the ones who suffer."

Adella is a chapter lead for Scouts for Equality. You can learn more about the organization and how to support it.

She also started a petition on change.org, asking the Boy Scouts to allow all families to be members. You can add your name to the petition, joining at least 60,000 other people who already have — and ask your friends and family to do the same.

From Your Site Articles
Related Articles Around the Web
school
Heroes

Crowther was just 24 years old when the planes struck. From that tragic moment until the tower fell, survivors say he led others to safety, repeatedly returning to the 78th floor lobby where people were stranded and guiding them down the one working stairway to where firefighters could take the to a working elevator. He had the opportunity to save himself—if he had gone with the first group of people he rescued, he could have made it out of the building before it collapsed. But he kept going back to save more lives.