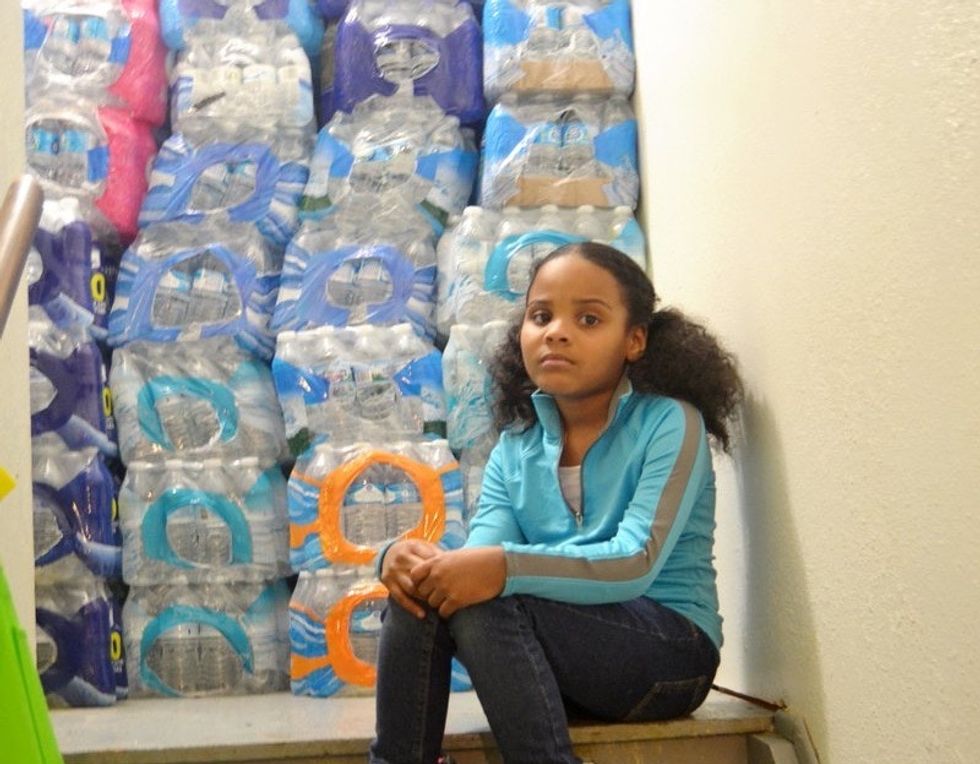 It's Christmastime in Flint, Michigan, and all that Mari "Little Miss Flint" Copeny wants is a Hatchimal. Oh, and to finally have clean water again.

You remember her, right? The adorable 9-year-old beauty queen who wrote a letter to President Obama about her hometown's ongoing water crisis and later got caught in an unfortunate campaign trail photo with Donald Trump?

Photo by The White House/Flickr.

Mari hasn't had a bath at home under an actual running faucet since April 2014. And it's not looking like that's going to change anytime soon, either.

Seven people live in Mari's house in Flint. They twist open dozens of small water bottles every day just so they can all shower and eat.

According to Mari's mother, Loui Brezzell, the family goes through about four cases of 16-ounce water bottles every day, not counting their drinking water, which they get from a five-gallon dispenser in the kitchen. "Most people use that every day," she says, "but they don’t have to measure it. They’re just turning on their tap."

And when the family needs more? Brezzell has to drive down to one of the city's water pods, expending her own time and gasoline to collect it herself, since the state won't expend the resources to deliver water to every home. At least they put the cases into her car for her — although she still has to unload it herself at home and has to deal with all that plastic waste.

Mari is not amused. Photo by Loui Brezzell, used with permission.

Mari and her family still have to manually twist open and pour out each bottle, one at a time, to use it. Boiling water for pasta? Open six or seven bottles. Cleaning produce so your kids will actually their veggies? Open more bottles. Brushing your teeth? Open another bottle. Washing your hands after using the bathroom? Open a bottle. Bath time? Lots of bottles.

"It’s a lot of water. It’s a lot of time. But if that’s what it takes to ensure my kids are safe and healthy, then we’ll take the extra steps," Brezzell says.

The family used 144 bottles of water just to prep their Thanksgiving dinner this year — and Christmas isn't looking much different.

Brezzell can't even be certain of how many people she needs to prep for. "You never know how many will come through over the holidays," she says. "It’s a pretty open-door policy. Our house tends to be the spot where kids in the neighborhood and friends and family that comes through." But she believes in being a part of the community like that — especially since no one else is taking care of their city.

Mari and her siblings. Photo by Loui Brezzell, used with permission.

This year's holiday menu will likely include a Christmas ham (more bottles for thawing) and some prime rib, plus fresh veggies ("My kids eat like rabbits. They could probably clear 10 pounds of raw vegetables in one day") and mashed potatoes (bottles for cleaning and bottles for boiling).

"In the beginning [of the water crisis], using the bottles was a pain in the butt," Brezzell says. "It’s still a pain, but we’ve been putting up with this for so long that it’s second nature."

Water pickup in the spring. Photo by Loui Brezzell, used with permission.

Every year before Christmas, family and friends gather at the Brezzell-Copeny house for a big ol' baking party. They make everything from oatmeal raisin to snickerdoodles to sugar cookies and snowballs and beyond.

But even that process involves bottled water to clean the mixing bowls and baking sheets, or to add into the powders and doughs to make the cookies moist. "That’s where you have the kids come in. Like, 'Hey, you wanna play a game? Come open bottles of water!'" Brezzell says with a laugh.

Inevitably, the kids' hands start to hurt from all that repetitive twisting, and it falls back to the adults to keep up the holiday spirits in the kitchen.

Yet, despite their own troubles, Mari and Loui also spend the holiday season giving back to Flint residents who are even less fortunate than they are.

As much as Mari wants an elusive Hatchimal for herself (mom's working on it), she also serves as the youth ambassador for Pretty Brown Girl's Doll Drive, raising money for toys and empowerment programs for underprivileged girls.

Mari posing with her Pretty Brown Girl doll (and some of her beauty pageant awards). Photo by Loui Brezzell, used with permission.

Meanwhile, Brezzell has been speaking up on behalf of the hundreds of Flint residents who are facing eviction. "Christmas is coming, it’s freezing cold, and you want to put people on the streets because their landlord isn't paying the water bill?" Brezzell says. "Kind of hard when you can’t use the water, right?"

The media cycle may have moved on, but Flint's water crisis is far from over.

"I just want people to see what we deal with, how life is, and try to keep attention on the people here," Brezzell says. "We literally have a third-world problem in America that’s not being addressed."

But here's perhaps the most frustrating thing about this water crisis. It started because the state was hoping to save $200 million over 25 years. But they could have avoided the problem entirely if they'd just spent $100 a day to add anti-corrosive agents to the water.

In other words, Flint is what happens when you run a city like a business — based on money — instead of treating people like humans.