Look at the photos and videos of thousands of youth demanding climate change action NOW. 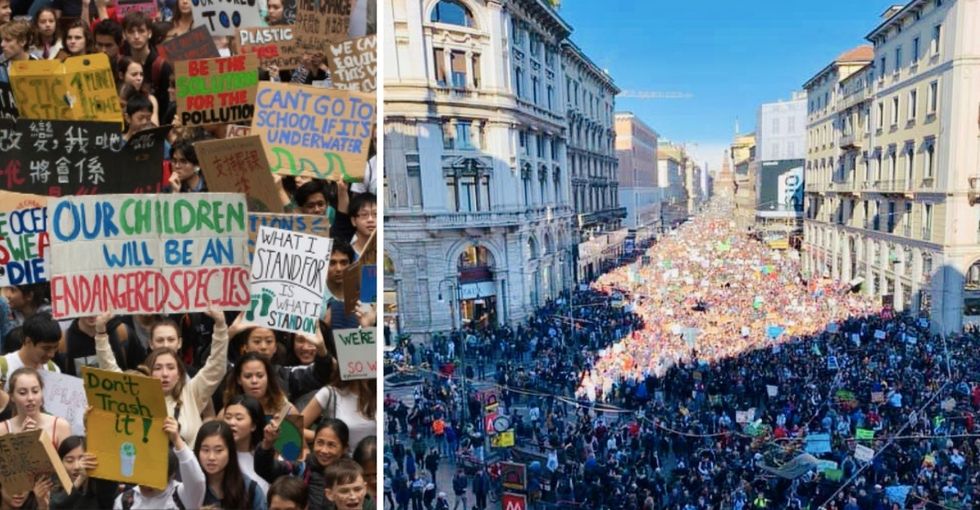 Watch out, world. The kids have shown up—and they are not here for our b.s. excuses.

Last year, 15-year-old Greta Thunberg sat on the steps of Swedish parliament, alone, to protest inaction on climate change. Today, at 16, she is leading hundreds of thousands of youth—and adult supporters—in a global school strike, filling the streets of cities and towns around the world for the same purpose.

Her singular act of protest has turned into a massive movement of young people who are fed up with politicians and leaders playing Russian roulette with their future. On Friday, March 15, students are leaving school to tell governments that young people want immediate and meaningful action on the global climate crisis.

Thunberg and others have already sat on the steps of parliament buildings every Friday in a #FridaysforFuture movement, trying to urge governments to urgently enact policies that will help stave off accelerated global warming.

You have to see the hundreds of thousands of young people showing up at these rallies to believe it.

As of Friday morning, school strikes and rallies were taking place in more than 2000 locations in 123 countries. Check out these photos and videos pouring in from around the globe:

Several thousand people in New York City, U.S., with more on the way.

Some pictures from the #FridaysForFuture #ClimateStrike in front of #NYC city hall. We have several thousand people… https://t.co/RzGvQvxuKM
— Paul Byron (@Paul Byron)1552668197.0

At least 5,000 marched in Helsinki, Finland.

In Milan, Italy, people showed up by the tens of thousands—and even more attended rallies in 200 other locations in Italy alone.

Dublin, Ireland—again, numbers in the thousands.

Are we getting the picture yet? Everyone who said that kids would just be skipping school to skip school were dead wrong.

The idea that kids don't really care about this or aren't educated enough about climate change to know what they're protesting is absurd. Kids learn about science and government in school. Scientists around the globe have made it clear that we have to get rising global temperatures under control or face dire consequences to life on our planet, while governments play political and economic games as they always do.

Kids don't care about such games. They want to inherit a healthy, habitable planet—and they're willing to fight for it.

And in Barcelona, Spain:

Check out the Maori Haka at the school strike at Nelson College, New Zealand.

Maori Haka at the school strike at Nelson College, NZ.Tens, maybe hundreds of thousands students in New Zealand, Australia and East Asia. They are setting the standard high!Latest global update say:2052 places in 123 countries on all continents, including Antarctica. So, the question is:What will you do on March 15 2019? #schoolstrike4climate #FridaysForFuture #climatestrike #WhateverItTakes

Are you tearing up yet? There's more:

This isn't a cute little demonstration; it's a global phenomenon. And it was all started by one teenager who refused to accept leaders' excuses for lack of action on climate change.

Kudos to Greta, for starting such an inspiring worldwide movement. Get out of the way, grown-ups. The youth have arrived to save us all.