Meet Keanon Kyles, the maintenance worker who moonlights as an international opera singer. 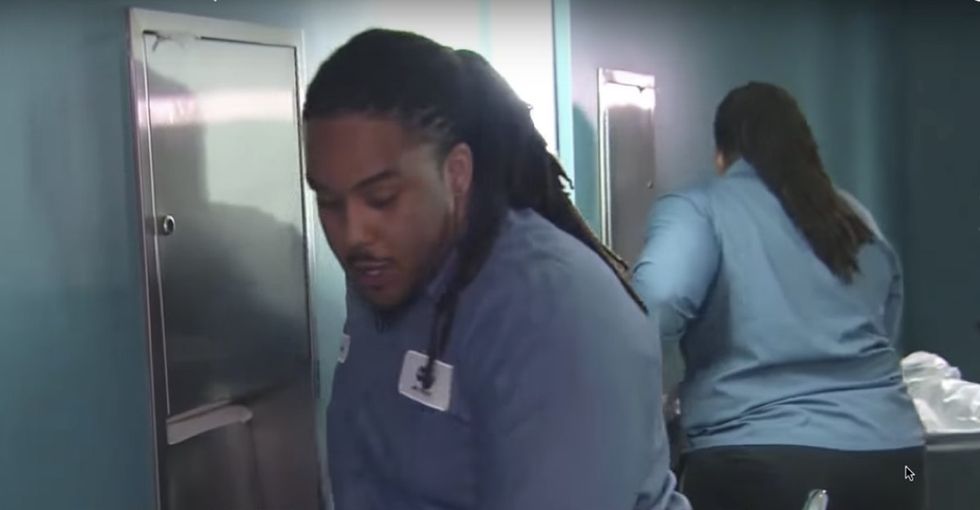 "La Bohème" is the popular opera that inspired the Broadway musical "Rent."

It's an awesome show about artists and dreamers who, despite their noble and lofty aspirations to bring beauty into the world, still struggle to make ends meet. They're rich in passion and their love for life — but unfortunately, that creative zeal doesn't pay the rent or the other bills they rack up.

It's the classic "starving artist" trope.

But the characters in these stories could have saved themselves a lot of trouble if they'd just followed in the footsteps of another great melodious master: Keanon Kyles.

All photos via ABC7 News.

Who is Keanon Kyles? He's a janitor at ABC7's studios in Chicago. And he's also Colline in an upcoming Scottish opera production of "La Bohème."

"I am the only American chosen for the opera," he told ABC News. "Everyone else is from overseas, so I go there feeling as if I'm representing a nation."

This isn't the first time Kyles' tremendous voice has carried him overseas either.

Kyles grew up on Chicago's South Side, and he started singing seriously when he was just 8 years old.

He definitely got more than a little flak for being the rare young black guy who's really into opera. But he never let the ribbing bring him down and ended up earning a degree in classical voice performance from Columbia College.

In 2015, he flew to Italy to perform at the Trentino Music Festival, and he's also appeared on professional stages all across Chicago.

And yeah, he's also a janitor. But that's not even his only job.

Between his work at ABC7, his vocal coaching classes, and his job at a department store, Kyles often works up to 90 hours a week.

That doesn't even include the time he spends rehearsing. But he says that's just the cost of creating great art to give to the world. (Plus the night shifts give him lots of quiet time to practice while he works.)

"It's a lot of sleepless nights and a lot of long days," he said in an interview with ABC News. "But it all pays off with the music because you get to do what you love: music."

As the characters in "La Bohème" demonstrate, sometimes art doesn't pay the bills.

When Kyles returns from his memorable Scottish excursion at the end of the summer, he's planning to go right back to his maintenance work at ABC7.

He's living proof that success isn't just a one-off deal. Often there's no real payoff without a little perseverance and a lot of hard work.

Money helps us feed ourselves, which is certainly important. But money doesn't feed our souls, and often our art matters just as much.

And that's why Kyles is an awesome example for us all.

Here's a video of Kyles performing in Italy last year. Break a leg in Scotland, Keanon!