Meet the inspirational Irish model who's smashing the gender binary. 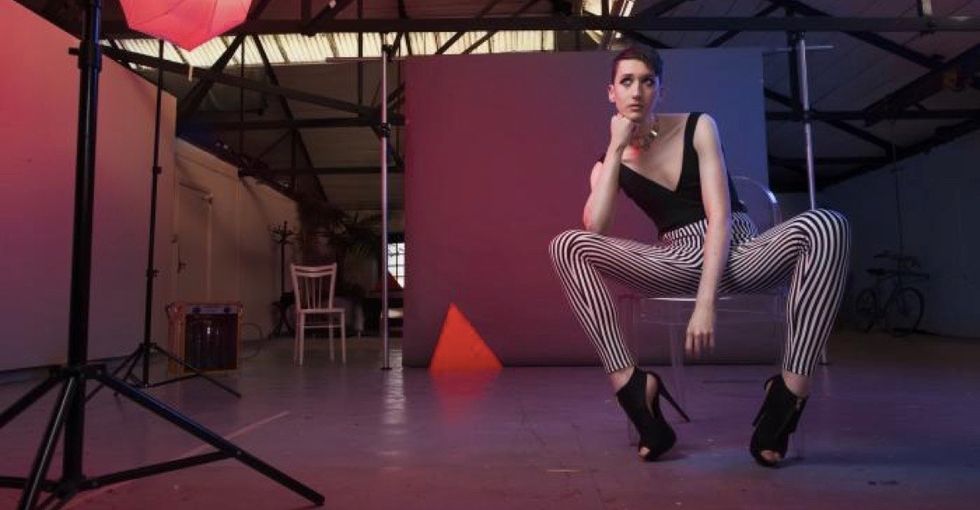 Ivan uses male pronouns, but he doesn't confine himself to simply being "male."

"My gender and its expression is more than what the male gender binary permits," he said.

And because of that, Ivan is breaking barriers right and left when it comes to modeling. "My photos show that boys do wear makeup, boys do wear high heels," Ivan said in an interview with the creative agency Thinkhouse. "I'm a boy, I am wearing them, and we do exist."

"Having this platform means a lot to me because I know it will send out positive messages about self-acceptance and the acceptance of others." All images from Thinkhouse/YouTube.

That language is integral to Ivan's identity. And so is the fact that, well, he knows how to werk.

As a generally expressive and artistic person, Ivan was always drawn to modeling — to creating impactful moments with just his body as a canvas. But once he actually began modeling professionally after secondary school, he says something felt … off.

Ivan realized that it wasn't modeling itself that was bothering him — it was the boring, uninspiring act of modeling as a male. "I deserve to be embraced as a model that is feminine," he told Welcometoterranova. "My gender allows me to be more imaginative and bold because I don't care about labels or boxes and this excites many people."

"I would love to work with the world's biggest designers and be the face of a few brands, not just because that would be amazing for obvious reasons, but because it would show that people are becoming more brave and inclusive."

Even as he made a name for himself with his fierceness on camera, Ivan didn't wear heels in public until his college graduation.

It sounds like a small victory for someone who had already begun to embrace his gender-expressive self. But he says wearing heels to his graduation from NUI Galway was a major step in helping him come into his own.

"Being a model gave me the confidence and tenacity to do it," he said. "I didn't like the idea that I am this fabulous and confident expressive model online that people look up to and admire, but in real life I hide away and conform."

Of course, the art of modeling can't take all the credit. Some of that belongs to his mother, too. He says that on the day before graduation, she told him that people might think or say mean things, but she raised him to be strong and brave. So in the end, he put on those heels and marched proudly across the stage.

"I am lucky to have family and friends that accept me. The stares and opinions of others can upset me sometimes, but everyone close to me is amazing."

Ivan certainly isn't the first or even biggest name in genderqueer modeling. But that doesn't mean he's not worth celebrating.

U.S. readers might be familiar with names like Ruby Rose, Rain Dove, and Ryley Pogensky. And in Ivan's native Ireland, RTÉ news anchor Jonathan-Rachel Cynch came out as gender fluid in 2015.

But Ivan's visibility as an LGBTQ role model is really important, especially in a country so strongly associated with its own Catholic history. Although Ireland is coming around to genderfluidity, Ivan says there's a lot of work still to be done. "There are still high levels of homophobic and transphobic bullying in schools, self-harm, suicide, etc., in Ireland and these need to be addressed immediately," he said.

That's why, in addition to his stunning and inspirational modeling work, Ivan also offers workshops and talks about gender, sexuality, and LGBTQ inclusiveness, including a recent one at TEDx Galway.

"If a guy says 'Ivan's cool, I love his high heels,' [other people ask him] 'Are you gay?' But why do you care? Instead of it just being, 'I'm appreciating the picture. It's art.'"

While his modeling skills have largely been embraced, Ivan has still encountered some resistance to his gender expression.

"Many brands and designers are afraid to be pioneering," he said. "Some of these barriers are too great to simply overcome because we are talking about people's beliefs and their willingness to take risks."

Not all of Ivan's professional struggles have to do with his gender, though. He also encounters the same false promises and untrustworthy people that anyone in the fashion world has to deal with. It's still not ideal, but if he's going to have to put up with any frustrations, it's better to be faced with industry-wide problems than continue to be held back because of who he is.

"If someone works with me, all of a sudden they are doing it for 'attention' or 'publicity' and it's not true. They might just be working for me because they like me as a model."

Ivan's work is an inspiring example of just how far our society has come in celebrating beauty in every gender.

Gender has never been as strict or simple as we try to make it out to be. There's still a ways to go, of course — as evidenced by the barriers that Ivan himself has had to face.

But as his stunning vogue has shown us, sometimes a little bit of self-confidence is all it takes to break through and inspire others to follow in your footsteps. Whether they walk in heels should be entirely up to them.