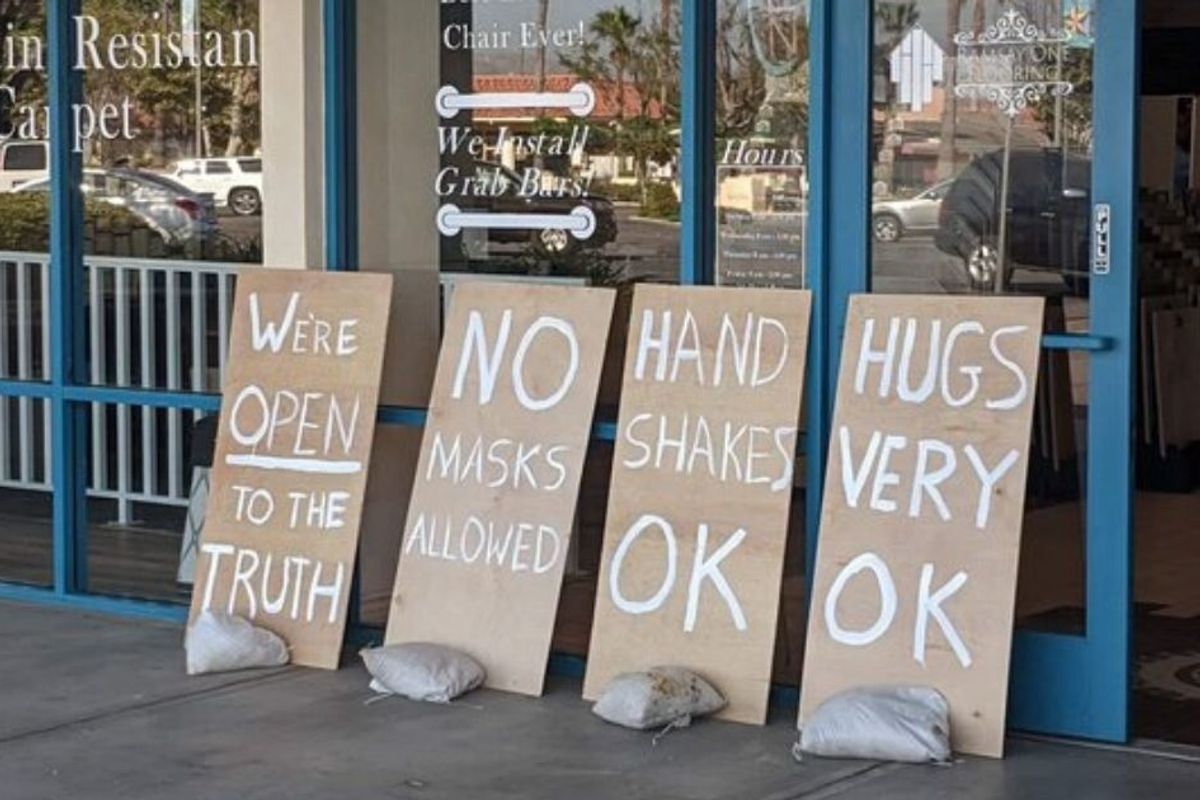 Pandemics are confusing by nature. We're dealing with a new virus that scientists have to scramble to study, an unknown contagion and death rate, constantly shifting data, and new information being thrown at us on the daily. And as human beings like certainty, that's hard.

Throw in the social and economic impact of trying to control the outbreak (and buy time for scientists to develop treatments and/or vaccines), along with the totally-on-brand politicizing of the pandemic in the U.S., and it kind of feels like a gigantic, out-of-control sh*tshow.

It's a many-fold problem, but one outcome is that all of this uncertainty creates a prime breeding-ground for misinformation to spread. And whoa Nelly, is it spreading.

I've heard that the CDC admitted their death numbers are inflated (they didn't and they're not), that the virus is no worse than the flu (it is), that the whole global pandemic was planned by BIll Gates (blink, blank stare), and that masks either don't help anything or actually make you sicker (somebody tell most of Asia).

We know that misinformation spreads faster than truth. And we know that a frightening number of Americans have been brainwashed into believing that anything considered "mainstream" is totally untrustworthy, while fringe outlets with no accountability or credibility are legitimate sources of truth. (Hint: If anyone tells you that they're the only ones telling you the real truth, run away. No credible outlet would ever say that.)

And that combo has created a vortex where people get spun topsy turvy, up becomes down, and anything that hits them in the face as it flies past feels true. That's how we end up with signs like these in the middle of a freaking pandemic:

The photo, shared by David Parsons on Twitter, shows signs sitting in front of Ramsay One Flooring, a construction company in Simi Valley, California.

"We're open to the truth," the first sign reads, followed by "NO Masks allowed," "Handshakes OK," and "Hugs very OK."

Umm, yeah. Contagious novel virus, people. 80,000 Americans dead in two months, and we aren't even sure if we're starting to drop off yet. The entire world scrambling to mitigate the spread and racing to come up with a way to treat or prevent it. But somehow, being "open to the truth" means defying very basic, universal hygiene that even kindergarten kids know is important when there's a bad bug going around? How does that make sense?

The only explanation is that this store owner has fallen for one of several "plandemic" narratives that paints the pandemic as some kind of evil plot orchestrated by dastardly villains who are out to steal Americans' freeeeedoommm. So, not a real thing. A big conspiracy because a bunch of YouTube videos told them so.

If this were a 9/11 "inside job" conspiracy theory, a JFK assassination conspiracy theory, or faked moon landing conspiracy theory, it wouldn't be a huge deal. People believe all kinds of far-fetched things, and when those beliefs are confined to the fringe and deal with past events that aren't of much direct consequence now, I take a "live and let live" approach.

But conspiracy theories filled with misinformation about the coronvavirus pandemic are dangerous. They lead people to outright reject and defy public health guidelines that are in place to literally save lives. Successful containing or mitigating a pandemic requires a population to be on the same page and work as a team. It requires us to be truly the United States of America as if our lives depend on it—because they do.

Don't we pride ourselves on having the best and the brightest scientists, doctors, and researchers in the world? Experts have known something like this would happen sooner or later, and decades of research and planning have gone into preparing for just this moment. Now we're just going to ditch all of that work, all of that learning, all of that preparation? Why? Because a baffling number of people trust discredited scientists on YouTube over the world's most respected and accomplished epidemiologists and virologists? Seriously?

No. Enough. There are legitimate discussions to be had about government overreach and whatnot, but using misinformation to justify defying public health measures is foolishness. And it's the kind of foolishness that can kill people. In fact, we've already seen it happen. An Ohio man who called the coronavirus "bullsh*t" and a "political ploy" died of COVID-19 in April. (Here's the same story from Fox News as well, so no one can complain about media bias.)

Information leads to beliefs, and beliefs lead to actions. If you believe this pandemic to be fake/rigged/planned/a hoax, you're going to act accordingly. And that's dangerous for everyone, including you. Stop it, for everyone's sake.