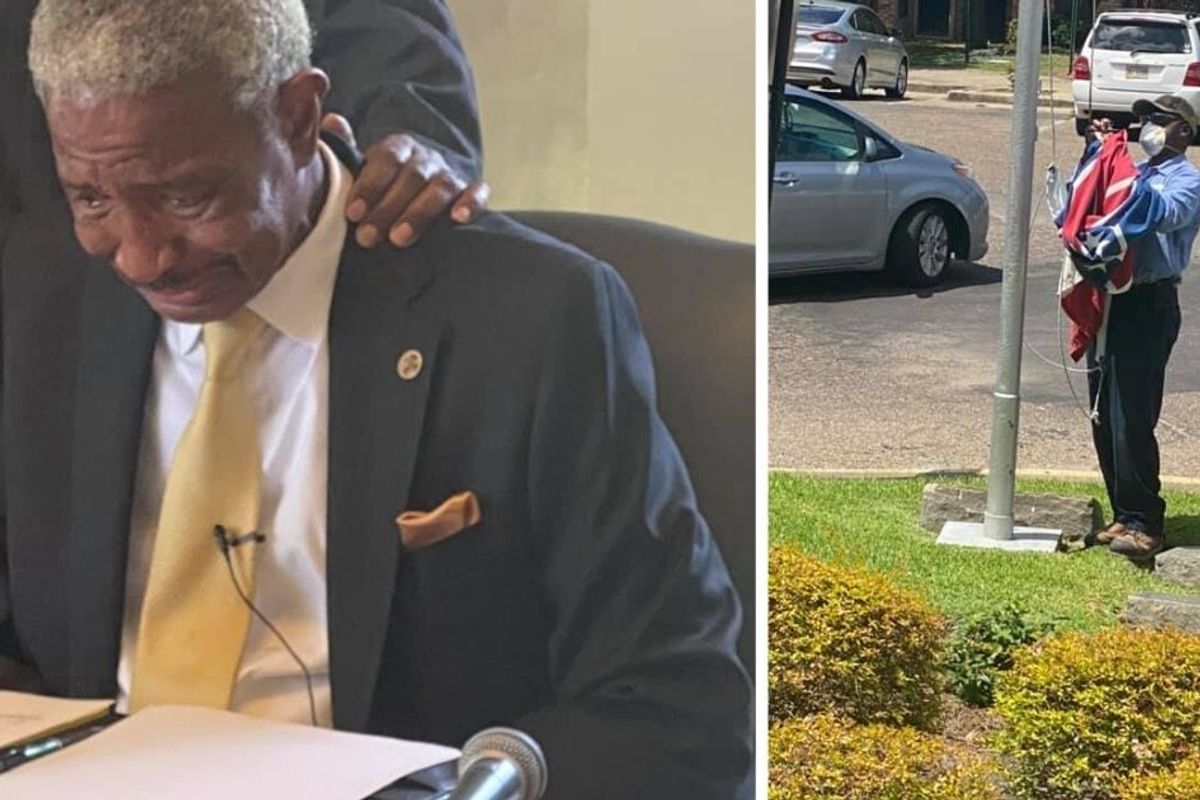 Laurel, Mississippi is home to a little over 18,000 people, more than 61% of whom are Black. On Tuesday, the town's mayor, Johnny Magee, issued a historic executive order to remove the state's flag from the City of Laurel government properties—a moment that moved him to tears.

In a state that once declared its official position as "thoroughly identified with the institution of slavery—the greatest material interest of the world," and listed as one of its reasons for joining the Confederacy the fact that the Union "advocates negro equality, socially and politically," the removal of a symbol of the fight to enslave Black people is a big deal. But the history of slavery is just the beginning. Mississippi was the most segregated state in the country in 1964, a full hundred years after slavery was abolished. Racism has always been rooted deeply in the history and culture of the state—including the state flag, which includes the battle flag of the Confederacy in its upper left corner.

The weight of that long history was visible in Mayor Magee's face as he tearfully sat for a full minute in front of the executive order to remove the flag. Instead of flying on government buildings in the town, the flags will be donated to the local library or other places that can keep them for posterity, according to the Laurel Leader-Call.

"Whereas through the ages, these banners have themselves grown to exemplify the traits that define the very fabric of the society they represent and have served as a means to unify, rally the spirit and passion of the citizens to one voice and purpose of the state, all of which demonstrates the significance given to these flag emblems," Magee read, according to the Laurel Leader-Call. "And whereas the current flag hovering above the State Capitol of the state of Mississippi was adopted as the state flag by the Mississippi Legislature in 1894, and the upper-left portion of this flag is often referred to as the Confederate battle flag."

Magee said the battle standard is a symbol of divisiveness and racial transgressions, "none of which represents the ideals and principles of our great nation, proud state and vibrant city."

"There comes a point in time in the annals of history when it becomes necessary to redefine who a people are, and what a collection of these people represent," Magee added. "It is the opinion of the mayor of this city that now is such a time."

Indeed. Now is such a time.