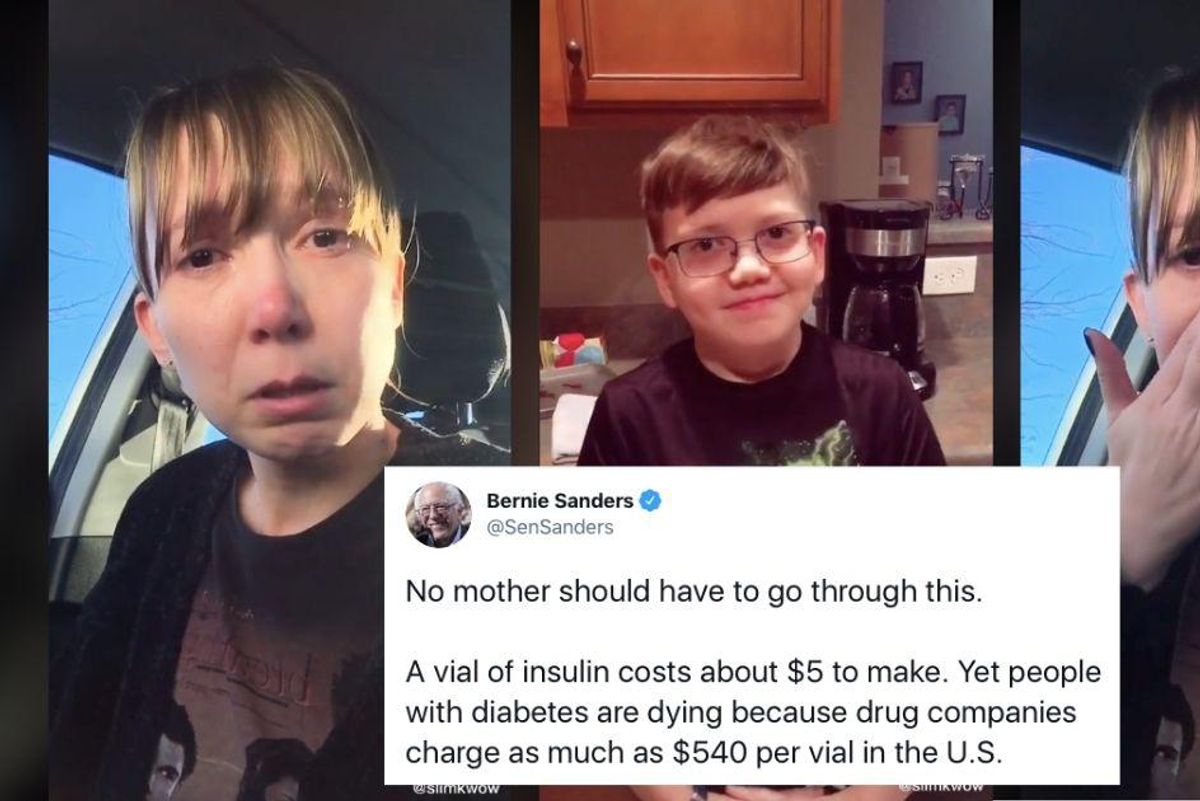 Katie Schieffer is a mom of a 9-year-old who was recently diagnosed with Type 1 diabetes after spending some time in the ICU. Diabetes is a nuisance of a disease on its own, requiring blood sugar checks and injections of insulin several times a day. It can also be expensive to maintain—especially as the cost of insulin (which is actually quite inexpensive to make) has risen exponentially.

Schieffer shared an emotional video on TikTok after she'd gone to the pharmacy to pick up her son's insulin and was smacked with a bill for $1000. "I couldn't pay for it," she says through tears in the video. "I now have to go in and tell my 9-year-old son I couldn't pay for it."

Schieffer explained that she has been working for 17 years and that she and her husband both work full-time. She works third shift and goes to school during the day. "How are you guys making it?" she asked. "Am I the only one struggling?"

She's not the only one struggling, of course. The unaffordability of healthcare in the U.S. is a national crisis. While the Affordable Care Act helped millions access health insurance, there are still millions of Americans who are uninsured or underinsured. And medical bills can still be hard to cover, even if you have insurance.

Speaking from experience, out-of-pocket expenses after insurance can still cost thousands of dollars. Even just doing diagnostic tests, scans, and procedures to figure out what an issue is—not even getting into treating whatever it is yet—can be too steep after insurance pays their portion for many families to afford. Americans have to constantly weigh whether the risk of missing a serious health issue outweighs the debilitating cost of a test to rule it out.

Schieffer's video went viral and she received a beautiful outpouring of support and advice. Some commenters shared how she can get insulin in an affordable way, including going to the medicine manufacturer's website and getting their cost assistance forms. She explained in a comment and a follow-up video that it was actually the blood sugar monitor that was $1100 and not covered under their insurance, and people suggested the same cost assistance route.

Others just chimed in with words of solidarity, agreeing that our system is broken. More than a few suggested she share her Venmo account name in her profile so people could help crowdfund financial assistance for her son's medical care. If that alone isn't a sign that the system is broken, nothing is.

Schieffer is getting it all worked out with the helpful advice and generosity of strangers, and she shared a video from her son about how he's doing as he learns to manage his diabetes.

@slimkwow Please don't take this one down we didn't show any needles or “drug use". ##t1d ##kids ##thankyou
♬ original sound - Katie Schieffer

When stories like this go viral, it's a mixed bag. While it's inspiring to see people rally around a fellow human being with love and support, it's also infuriating to realize how dystopian it can be here in the "land of the free." The U.S. is supposed to be some kind of beacon of light to the world, but what kind of shithole country lets its citizens go bankrupt or die because they can't afford to go to the doctor or pay for their medications? Part of why our health outcomes are so abysmal compared to other developed nations is because people don't get the medical care they need because they can't afford it. That's just plain ridiculous.

If anyone wants to help this mama and kiddo out, here's where you can send donations. (Just be aware that someone has set up fake accounts with an extra "r" at the end, so be sure you only see one "r" in Schieffer.)

No one should have to crowdfund to pay for healthcare, but here we are. Hopefully with a new administration coming in, we'll make more strides toward joining the rest of the developed world in ensuring that healthcare is truly affordable for all Americans.

From Your Site Articles
Related Articles Around the Web
healthcare