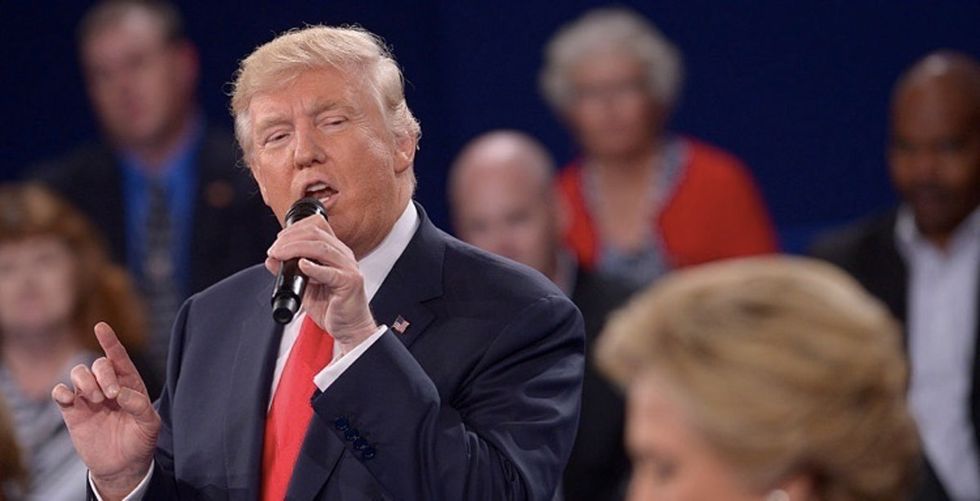 At the second presidential debate on Oct. 9, 2016, a Muslim woman asked both candidates a question about Islamophobia.

"There are 3.3 million Muslims in the United States and I'm one of them," she began. "You've mentioned working with Muslim nations, but with Islamophobia on the rise, how will you help people like me deal with the consequences of being labeled as a threat to the country after the election is over?"

The woman, who identified herself only as one of America's 3.3 million Muslims. Photo via PBS Newshour.

Trump went first, and his answer contained a rather ... unique suggestion for the Muslim community: that Muslims around the United States need to "report the problems when they see them."

Simple! Making the world a better place means everyone participating. We're all in this together, right? Right?

The Muslim community, excited about its new assignment, took to Twitter to begin reporting all the problems around them using the hashtag #MuslimsReportStuff.

Turns out, there were many problems to be reported.

From the concerning lack of personal space between candidates:

To the more mundane struggles of laundry day:

Comedian Kumail Nanjiani wanted to report an underappreciated gem from the annals of film history:

And author Reza Aslan reported that the world probably can't handle the truth about hummus:

Actually ... there were a lot of food issues that needed to be reported:

More to The Donald's point, however, a couple of truly heinous confessions came to light:

One time I accidentally ate pancetta bc I didn't know it was bacon. It was delicious 😳 #MuslimsReportStuff
— Nuha Krad (@Nuha Krad)1476069297.0

But no one, especially Muslims, could ignore reporting the biggest problem they saw that night:

While many were quick to make light of Trump's proposal, let's be clear: Islamophobia is on the rise and uninformed rhetoric like his is partially to blame.

In fact, ever since Donald Trump first proposed banning Muslims from entering the United States in December 2015, there's been a significant spike in anti-Muslim hate crimes.

Trump's now infamous "Muslim ban" was proposed to combat the supposed threat of terrorism committed by refugees, despite the fact that refugees go through a lengthy and detailed (one might even say "extreme") approval process to enter the country.

Trump also suggested that the San Bernardino shooters' neighbor failed to report suspicious activity in their apartment, a claim that has been debunked over and over again.

Asking Muslims to report and stop acts of terror in order to combat Islamophobia is not only a simplistic solution, it reinforces the idea that the Muslim community as a whole is responsible for the acts of extremists.

I'm a Muslim and, just once, I'd like to hear candidates talk about me neither as a terrorist nor as eyes and ears on terrorists. #Debates
— Laila Lalami (@Laila Lalami)1476063954.0

That idea has been shown to be harmful and dangerous, time and time again. If you want to stop Islamophobia, or hate for any group of people, it's usually good to start by not painting that group with a single brush.