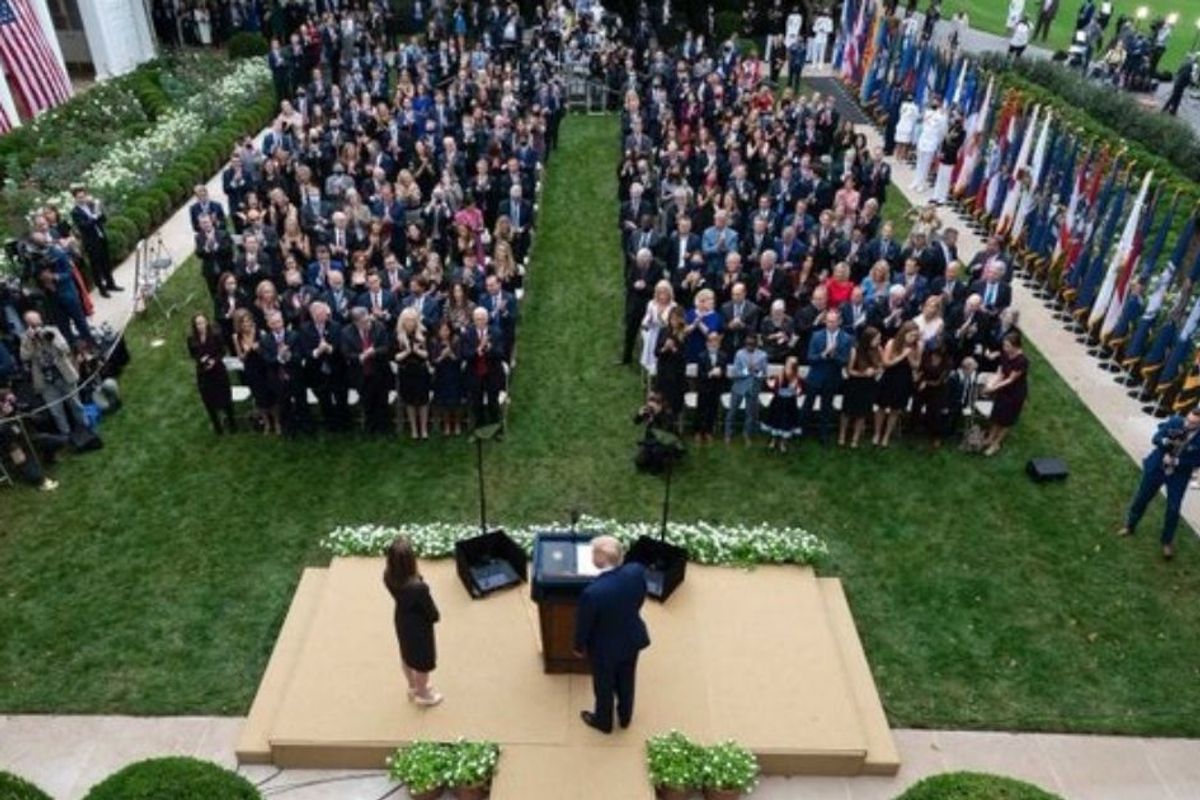 The New England Journal of Medicine is the oldest continuously published peer-reviewed medical journal in the world, and among the most prestigious professional journals on earth. Founded in 1812, the NEJM is where medical professionals have turned for the latest and greatest scientific research for more than two centuries.

The journal rarely publishes editorials signed by all the editors, editor-in-chief Dr. Eric Rubin told CNN. And it has never weighed in on an election—until now.

Rubin penned the editorial published on October 8 and titled "Dying in a Leadership Vacuum." Without mincing words, it calls on the United States to vote out the current leaders who have failed the "test of leadership" the pandemic has created. "They have taken a crisis and turned it into a tragedy," the editors wrote. "The magnitude of this failure is astonishing."

The editorial can be read in full on the NEJM website, but here are some highlights:

First, in how we compare with other countries:

"Countries that had far more exchange with China, such as Singapore and South Korea, began intensive testing early, along with aggressive contact tracing and appropriate isolation, and have had relatively small outbreaks. And New Zealand has used these same measures, together with its geographic advantages, to come close to eliminating the disease, something that has allowed that country to limit the time of closure and to largely reopen society to a prepandemic level. In general, not only have many democracies done better than the United States, but they have also outperformed us by orders of magnitude."

On why the U.S. response has been so bad:

"We have failed at almost every step. We had ample warning, but when the disease first arrived, we were incapable of testing effectively and couldn't provide even the most basic personal protective equipment to health care workers and the general public. And we continue to be way behind the curve in testing. While the absolute numbers of tests have increased substantially, the more useful metric is the number of tests performed per infected person, a rate that puts us far down the international list, below such places as Kazakhstan, Zimbabwe, and Ethiopia, countries that cannot boast the biomedical infrastructure or the manufacturing capacity that we have."

"The United States instituted quarantine and isolation measures late and inconsistently, often without any effort to enforce them, after the disease had spread substantially in many communities. Our rules on social distancing have in many places been lackadaisical at best, with loosening of restrictions long before adequate disease control had been achieved. And in much of the country, people simply don't wear masks, largely because our leaders have stated outright that masks are political tools rather than effective infection control measures."

"The response of our nation's leaders has been consistently inadequate. The federal government has largely abandoned disease control to the states. Governors have varied in their responses, not so much by party as by competence. But whatever their competence, governors do not have the tools that Washington controls. Instead of using those tools, the federal government has undermined them."

After lamenting the hamstringing and politicization of the CDC, the NIH, and the FDA, the journal blasted government officials for undermining science.

"Our current leaders have undercut trust in science and in government, causing damage that will certainly outlast them. Instead of relying on expertise, the administration has turned to uninformed "opinion leaders" and charlatans who obscure the truth and facilitate the promulgation of outright lies."

And after lamenting the costs of "not taking even simple measures," the editors called on the American citizens to replace the leadership that got us here.

"Anyone else who recklessly squandered lives and money in this way would be suffering legal consequences. Our leaders have largely claimed immunity for their actions. But this election gives us the power to render judgment. Reasonable people will certainly disagree about the many political positions taken by candidates. But truth is neither liberal nor conservative. When it comes to the response to the largest public health crisis of our time, our current political leaders have demonstrated that they are dangerously incompetent. We should not abet them and enable the deaths of thousands more Americans by allowing them to keep their jobs."

While the journal refrained from referring to any specific leaders by name, we all know who they're talking about. The Trump administration has failed the country in its handling of the pandemic, full stop.

I keep looking at this Rose Garden picture and can't help but think of all the students denied graduations, all the… https://t.co/I6DHoARdBA
— TRINITYPREZ (@TRINITYPREZ)1601733860.0

We don't need a medical journal to tell us what we can see with our own eyes, but it sure is refreshing to see it being laid out for history to remember.

Stillbirth after the 20-week mark happens to approximately one in 100 pregnancies. Approximately 24,000 babies are born stillbirth each year. And while stillbirths are rare, the experience can be emotionally painful for those who have to go through it.

Last month, Chrissy Teigen and John Legend lost their third child, Jack, at 20 weeks. Teigen suffered a partial placenta abruption, a rare diagnosis in which the placenta and the lining of the uterus separate. It prevents the fetus from receiving oxygen and nutrients and causes bleeding in the mother. Now, Teigen is opening up about her experiences with the loss in a heart wrenching Medium essay.