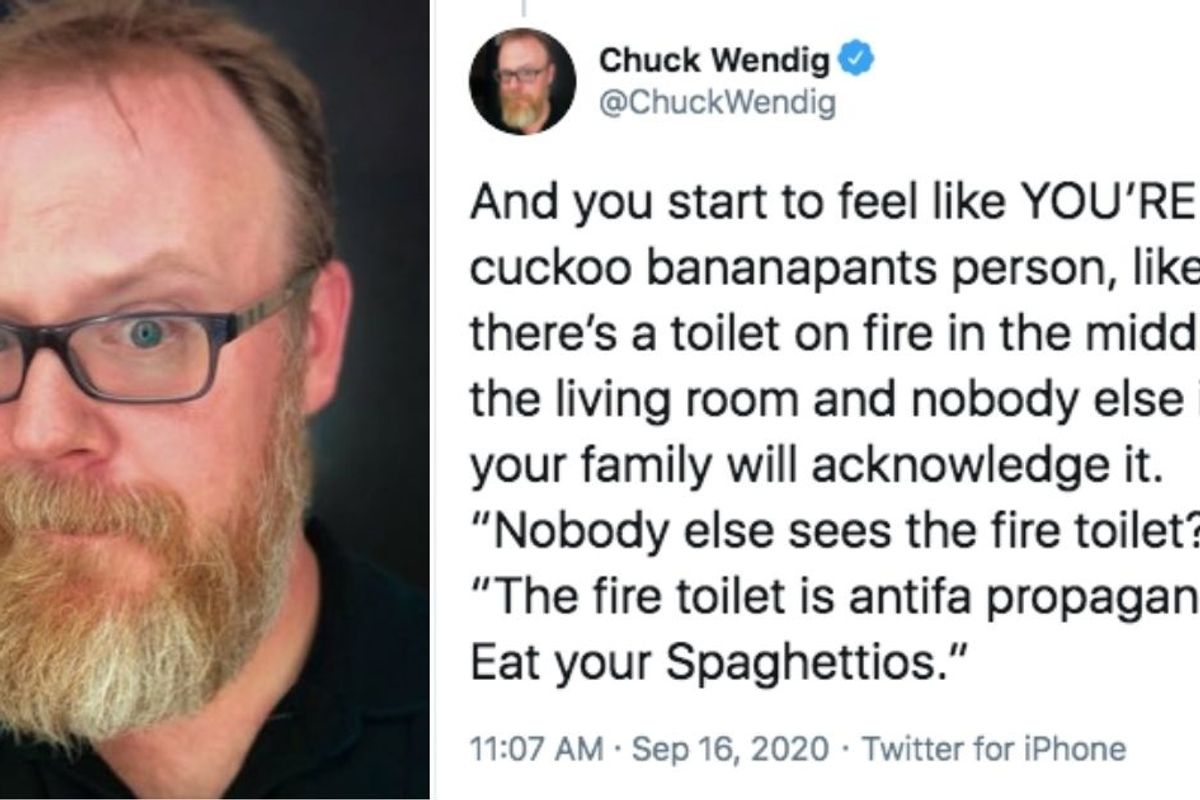 There's some comfort in knowing I'm not alone in this. It's always refreshing to hear from fellow citizens who feel like someone keeps slipping them crazy pills, which is why writer Chuck Wendig's recent Twitter thread about people ignoring the toilet on fire in the living room resonated with me. Wendig has a way with words, and seeing him describe the surreal experience of life at this moment—and that it's totally normal to feel totally not normal about it—was immensely satisfying.

Politics, Zoom school, people not wearing masks, gender reveal forest fires, and other assorted verses to We Didn't Start The Fire — JFC, shit is jaw-dropping right now. Reality is walking a tightrope between Absurdist Shitshow and Active Malevolence so, yeah, you aren't okay.

I went to an ice cream parlor and everyone had masks on (no dicknoses, even) and that was great.

And I look outside and I see people acting like there's no pandemic and then online there are people who act like the president is doing a great job and Joe Biden (!) is a socialist (!?) and climate change is a liberal bogeyman and you start to feel like reality is unraveling.

And you start to feel like YOU'RE the cuckoo bananapants person, like there's a toilet on fire in the middle of the living room and nobody else in your family will acknowledge it. "Nobody else sees the fire toilet?" "The fire toilet is antifa propaganda. Eat your Spaghettios."

And all that makes you feel like you're the fucked up one, like it's not okay that you're not okay. But it is okay. You're not okay and that's your reaction to a very not okay world. There is a toilet on fire in the living room. I see it too.

I've no answers how to make it okay. (Except, obviously, vote, give money, raise a ruckus.) Try to secure some peace and pleasure for yourself away from this Hell Realm. I walk and listen to birds and high-five pine trees and it feels a little better. Not okay, but closer to it. (And I note that even going outside is a privilege right now, with many places experiencing ash and smoke or bad weather. I only mean to suggest you put down the phone and try to steal some moments of peace away from the maw of the maelstrom.)

I don't know that we're going to be okay. Individually or collectively. But we can try despite everything to care about ourselves and each other through whatever comes and that can be our true north, a star to light the dark. It's okay that you're not okay. The toilet is on fire. I see it too. And I'm not okay either.

Ah, thank you Chuck Wendig for putting the feelings of so many of us into words. We're not okay, and that is okay. If we were okay through all of this, it would mean that we're really not okay.

And since there's no season finale preview yet for this weird reality show we're living in, we have to learn to be okay with not being okay. That's okay, even though it's not. That's where we're at. That's reality at the moment.

The toilet is on fire. At least we're not the only one who can see it.