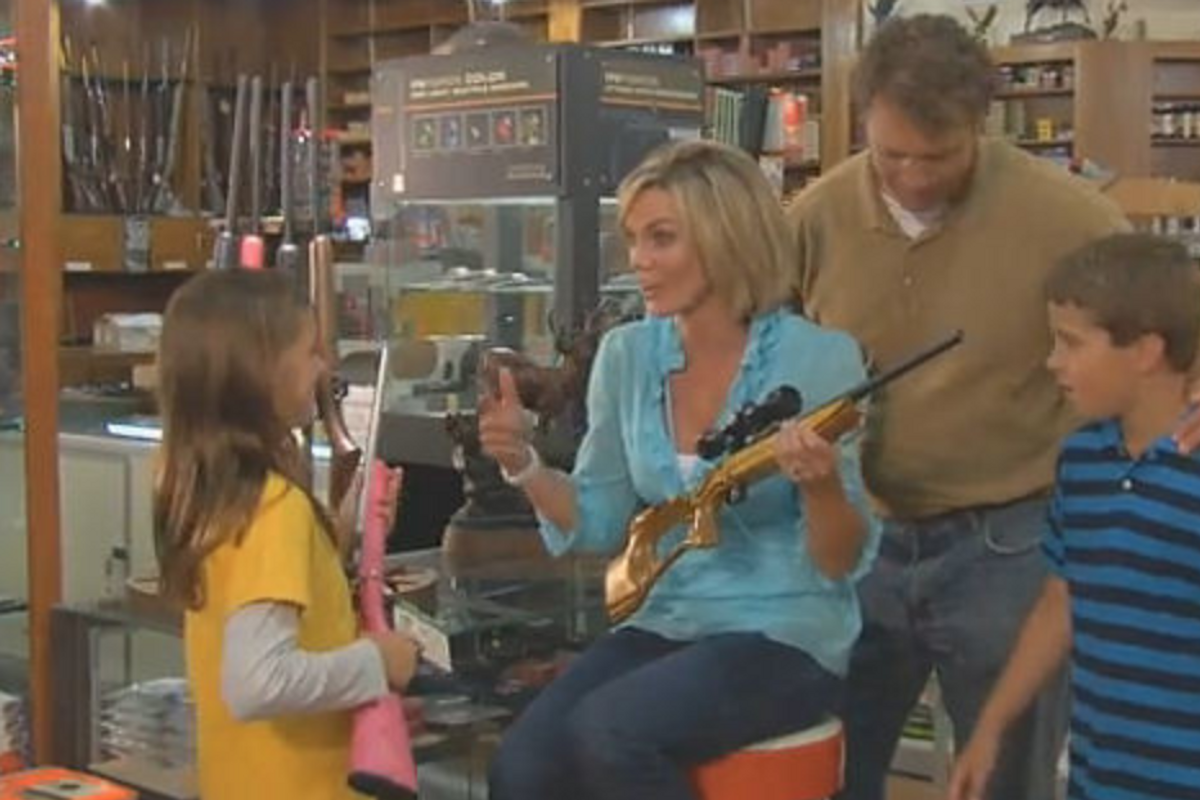 There are reasonable arguments to be had on all sides of America's debates about guns.

Then there are NRA lobbyists.

According to the Tampa Bay Times, Florida National Rifle Association lobbyist Marion Hammer spoke to state economists last week to explain why a proposed assault weapons ban would devastate gun manufacturers in the state. The proposed amendment, which is being led by the aunt of a student killed in the Parkland school shooting, would ban the future sale of assault rifles in Florida and mandate that current owners either register their guns with the state or give them up.

The back and forth between those proposing and opposing the amendment appears to be a pretty typical gun legislation debate. Only this time, the NRA lobbyist pulled out one of the most bizarre arguments I've seen yet.

First, Hammer warned economists that the $1 billion Florida gun manufacturing industry would flee the state if the amendment even went on the ballot. "If I were the owner of one of these firearm manufacturing companies, I wouldn't wait to see what voters do," she said. "If this were allowed to go on the ballot, I'd say, 'I'm outta here.'"

Nothing like having our laws determined by the will of gun manufacturers instead of the will of the people. Yay, democracy!

RELATED: The NRA was rightfully lambasted after telling trauma doctors to 'stay in their lane.'

But then she pulled out this gem:

"How do you tell a 10-year-old little girl who got a Ruger 10/22 with a pink stock for her birthday that her rifle is an assault weapon and she has to turn it over to government or be arrested for felony possession?"

First of all, having to register a firearm is not the same as having to turn it over to the government. Second, I'm not sure if a Ruger 10/22 would even quality under this assault weapons ban—the definition is still under debate—but for the sake of argument let's say it fits because it's a semi-automatic weapon and takes a detachable magazine that can hold more than 10 rounds.

I have a 10-year-old, and have raised two other children past the age of 10. They are all responsible, well-behaved kids. But my son had to wait until he was 10 to get his own Swiss army knife, for crying out loud. He's just starting to learn to safely use a power drill. There is no way on God's green earth I would feel comfortable with any 10-year-old possessing their own firearm.

I am well aware that there is a whole gun culture out there that I don't personally relate to and struggle to understand. I recognize the fact that there are families for whom guns and hunting and shooting sports are beloved, long-held traditions. I know that there are millions of responsible gun owners out there who teach their kids to respect the dangers inherent in operating a firearm and train them in all the safe handling rules and practices.

But I also know that there are a whole lot of irresponsible gun owners out there as well, and that toddlers kill more Americans with guns than terrorists do. I know that we have a gun death rate ten times higher than what it should be for a country with our socioeconomic status. I know that no other developed country deals with the frequency of mass shootings or the overall gun violence rates that we do here.

Giffords Law Center explains why children possessing guns is a dangerous game. There's a reason kids are banned from driving a car or drinking alcohol or voting until they are adults. Kids' brains are still developing well up to the early 20s—and the parts of the brain responsible for impulse control and judgment are among the last areas of the brain to develop. I don't care how mature a 10-year-old may appear to be—I can't see any good reason for a child to have their own assault weapon.

RELATED: Twice as many American children die from gun violence as police officers and soldiers combined.

Of course, since some 30 states allow children to possess guns, we have no choice but to trust that parents are teaching their kids well. So to answer Ms. Hammer's question about how to tell a 10-year-old her weapon is now illegal or has to be registered? You just tell her just that. If you think she's mature enough to have her own semi-automatic rifle, then surely she is mature enough to be able to handle having to register her gun. I mean, what do you think will happen if you tell her that? Will she cry? Will she get angry? Will she turn violent? I mean, what is the real concern here? I'm sure she'll get over it, especially if a caring adult explained that the law was enacted to try to curb our country's insane rate of gun violence.

Teach her by example. Show her the response of Dr. Charles Tate, a Broward county radiologist who owns multiple guns including ones that would be banned under the assault weapons amendment, who said he'd happily give them up if they were outlawed.

"I am far more interested in the safety of my wife, my children, and my grandchildren," he said.

It really is that simple.

Sam White may only be six years old, but he's got skills that surpass most adults.

The Tennessee youngster and his dad, Robert White, have swept social media and stolen people's hearts in their "YouCanBeABCs" rap collaboration. With dad beat boxing in the background, 6-year-old Sam expertly takes us through the entire alphabet in order, naming careers kids can aspire to with short, clever, rhyming descriptions of each one.

Catch a building to kiss the sky

You can be a "C"—COMPUTER SOFTWARE DEVELOPER

With programs and systems and files

Cuz everybody loves to smile

Sam's ease in front of the camera, skill in rapping the lyrics, and obvious joy in performing are a delight to witness. And dad in the background, backing him up with a beat, makes for both a sweet backdrop and a metaphor for strong, steady, supportive parenting.