Obama just made a big endorsement that could help make history this November. 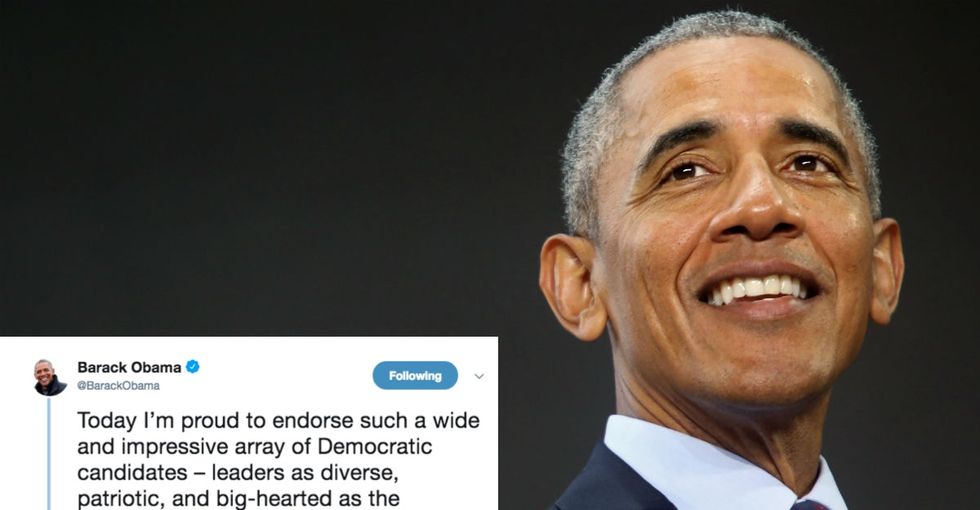 All things considered, President Barack Obama has kept a relatively low profile ahead of the midterms.

That is, until now.

On August 1, #44 released the names of candidates he's endorsing, as November creeps nearer.

With a polarizing, unpopular president wading through his first term, Democrats have a real shot at taking back the House and winning a number of consequential state races. On Wednesday, August 1, Obama gave us the first clear picture of whom he wants succeeding in a potential blue wave.

He tweeted out a list of "leaders as diverse, patriotic, and big-hearted as the America they’re running to represent" in races across 12 states. As CBS News reported, 48 of the 81 candidates are women, 22 are racial minorities, and three are openly LGBTQ.

There weren't any necessarily surprising or controversial revelations in the endorsements, as the former president threw his weight behind the likes of California gubernatorial candidate Gavin Newsom and Senate candidate Jacky Rosen of Nevada.

But at least one endorsement is particularly noteworthy.

Obama put his stamp of approval on Stacey Abrams' candidacy for governor of Georgia.

And that could help her make the history books come November.

Not just in Georgia or the South — but in America.

Running a campaign focused on expanding Medicaid, rethinking criminal justice reform, and funding public education, Abrams is certainly to the left of what many would consider the conventional Georgia politician. But the state's changing demographics means a strong showing from people of color and Georgia's relatively small (but critical) white progressive population could snag her a victory this fall.

People need to turn out, though, Obama reminded his supporters.

"I’m confident that, together, [these candidates will] strengthen this country we love," Obama tweeted. "But first, they need our votes."

She may be facing an uphill battle. But Abrams is confident she has a roadmap to victory in her hands.

"We are writing the next chapter of Georgia's history," Abrams said during her primary victory speech in May, "where no one is unseen, no one is unheard, and no one is uninspired."

Visit AmazonSmile Charity Lists to donate directly to a local charity in your community, or simply shop smile.amazon.com and Amazon will donate a portion of the purchase price of eligible products to your charity of choice.
From Your Site Articles
Related Articles Around the Web
holiday
More