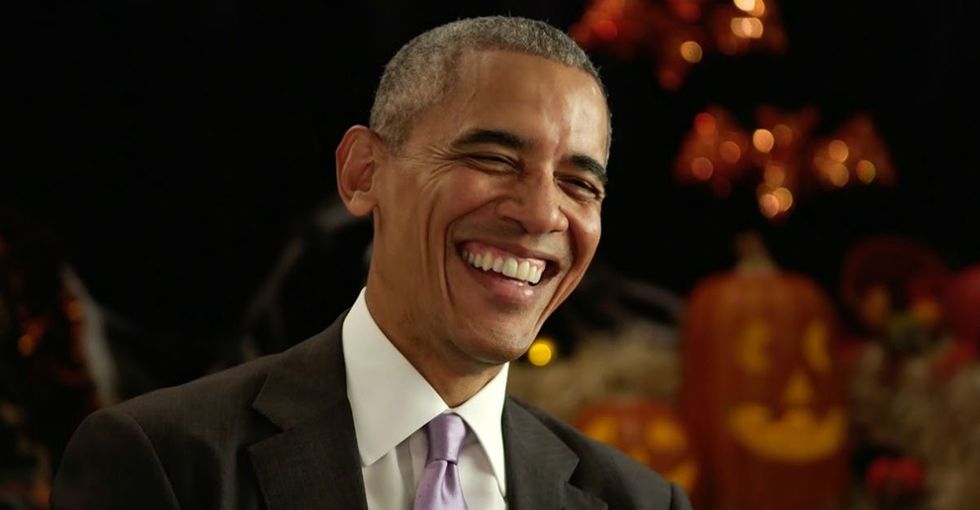 On Halloween, President Obama went on "Full Frontal With Samantha Bee" to get to the bottom of some serious business — like what costume the president was trying to pull off.

They also found some time to talk about voting. Bee put on her best millennial impression to see if Obama could persuade her to cast her ballot on Nov. 8.

“Young people have a bigger stake in this election than anybody," the president told her. "I would hope that you’d be willing to take about the same amount of time that you spend just looking through cat videos on your phone to make sure that democracy’s working."

They also talked about what Obama wants his legacy to be after he leaves the White House next year.

"If we can look back 20 years from now and say to ourselves, ‘There were a whole bunch of people who were inspired by what we did and are doing it even better,’ then we’ll feel pretty good," the president said of he and Michelle's impact in the White House.

Bee made him aware of the other monumental milestone his presidency offered America.

The two also touched on the hardships Hillary Clinton will face as a glass-ceiling-shattering figure, should she become president — something Obama knows a thing or two about.

Being the first black president, Obama faced unique challenges no president before him had to endure, such as the racist, ludicrous notion that he's not really an American.

“If and when Hillary is president," Bee asked, "what do you think will be the female equivalent of 'You weren’t born in this country'?”

“I think the equivalent will be, 'She’s tired, she’s moody, she’s being emotional.' When men are ambitious, it’s just taken for granted — ‘Well, of course they should be ambitious.' But when women are ambitious, ‘Why?’ That theme, I think, will continue throughout her presidency, and it’s contributed to this notion that somehow she is hiding something.”

Obama's answer is one many women are familiar with. Because even if you detest everything about Clinton, you can still respect the fact that she will face blowback from an electorate grappling with change.

Clinton's gender has played a role in the public's perception and attitudes toward her for decades, highlighting the double standards we often see between men and women in the workplace.

She's been accused of being too emotional, but also not emotional enough. She's been too soft, apparently — but somehow also too ruthless? Her "likability liability," which dogs many women in positions of power, is just as relevant in this election as it ever was before. And you already know what happens when she's caught — gasp! — not smiling on the campaign trail.

When photo blog Humans of New York profiled Clinton in September, a telling thing happened in the comment section on Facebook: women of all political stripes empathized with her story of handling sexism as a college student.

"While we’re waiting for the exam to start, a group of men began to yell things like: 'You don’t need to be here,'" Clinton recalled. "It was intense. It got very personal."

“I was taking a law school admissions test in a big classroom at Harvard. My friend and I were some of the only women...

Posted by Humans of New York on Thursday, September 8, 2016

Clinton's HONY story of having to deal with sexist classroom bullies transcended political boundaries for many women.

And you didn't need to like her to understand the struggle.

Her gender will likely play a role in how she is seen and judged as a leader.

But if enough nasty women (and the men who support them) stand up to the injustice, maybe we can make a difference — especially for the future madam presidents headed our way.

Watch President Obama on "Full Frontal With Samantha Bee" below: