You knew she led so many slaves to freedom — but did you know she was on this level? 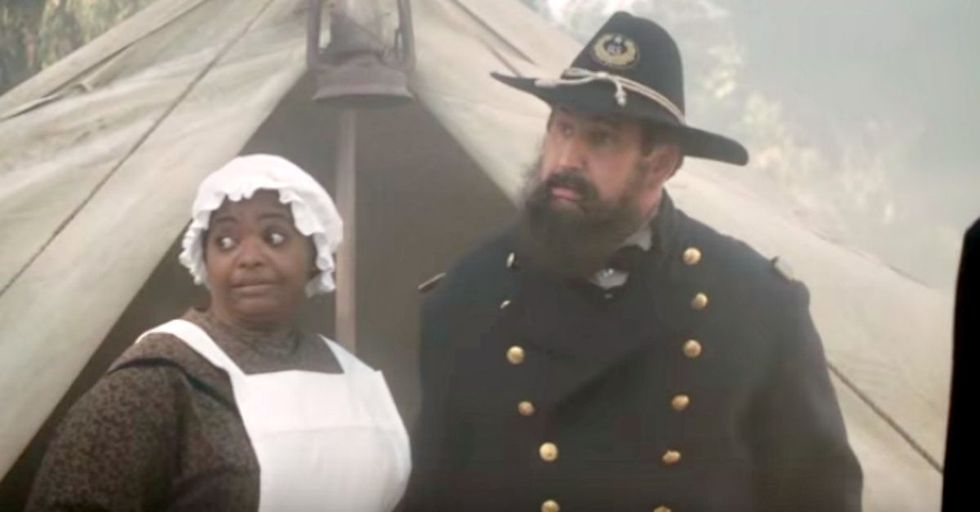 If you've never seen "Drunk History" on Comedy Central, the premise is this: They get an interesting personality, get them drunk, and then have them tell a story from history that they're excited about.

The results are usually pretty excellent, but this one about Harriet Tubman's lesser-known role in the Civil War is just the best. Octavia Spencer plays the role of Tubman, lip-synching the words that are actually coming out of the narrator's mouth. THE. BEST.

Keep in mind, there's a little swearing going on. It's worth it.

Here is Crissle West, writer and co-host of a comedy podcast, doing first things first before jumping into narrating the story.

All GIFs via "Drunk History."

"Harriet Tubman does not get her just due. You hear her name, you think, 'Oh she led the slaves to freedom.' But you most certainly do not know that she was a spy for the Union."

How Harriet Tubman's life as a spy began:

As Crissle tells it, Tubman was in Port Royal, South Carolina, and after aiding the soldiers as a nurse, she decided she could do much more to get the slave-freeing party started and approached a colonel with her idea: "I could totally be a spy for you. ... I have connex. ... Like when I dress up and sh*t, those people have no idea who I am."

Harriet had to lay the groundwork for her plan.

So she infiltrated the plantation, posing as a fellow enslaved person, and says to them: "Hey guys, not to stir up any sh*t or whatever but I know y'all are tired of being slaves. I was totally tired of being a slave. And none of us have to be slaves anymore, so whoever's down to help the Union, just let me know." And then everyone was like, "Cool!"

And then she had to pull all that strategizing and researching together into a plan of action for victory.

After using her connections with people who knew the slave-owners' traps along the river route spanning several plantations, she brought her plans to the colonel, and those plans were ambitious: TORCH THE MOTHERF***ING PLANTATIONS ALONG THE RIVER, FREEING SLAVES AS THEY WENT!

As Crissle tells it, the colonel was all: "Well f**k yeah, I don't have sh*t to lose. Let's work together and burn that sh*t down!"

If you don't have time to watch the video, the super-short story is a daring caper of navigating the river with her crew, overtaking plantations, burning them down, and bringing the slaves with her as she freed them — about 750 of them.

But seriously, you're going to want to watch and share this video. It's so, so worth it.